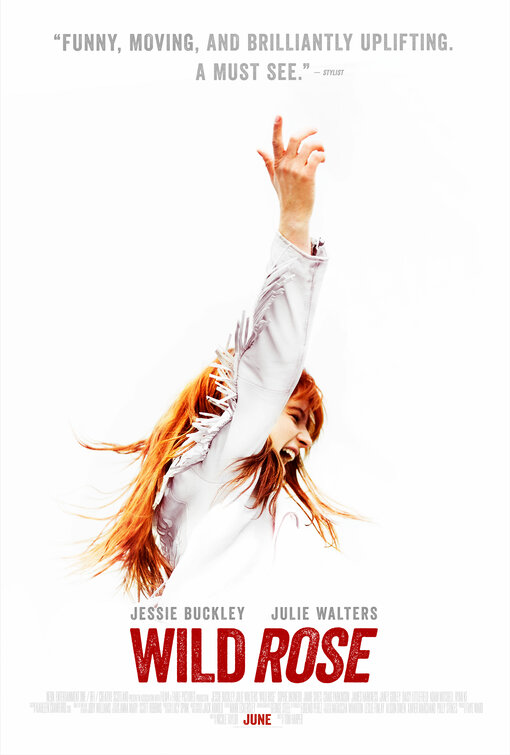 Synopsis: A musician from Glasgow dreams of becoming a Nashville star.

Review: As is often the case more and more with movies, it’s the films that you know the least about the tend to provide the biggest surprises. I’d seen the preview for Wild Rose a few times here and there and didn’t give it much of a second thought, feeling like it was something that I’d catch later when I had extra time to spare. Then the soundtrack made its way to my playlist and proceeded to sit there for another month or so, gathering digital dust. With a release date looming and an opportunity to get an advanced look at the movie presenting itself, I figured I’d give it a listen and…I was just not prepared for what I heard.

The name Jessie Buckley was only familiar to me because of the buzz generated from her work in a little-seen but much loved thriller from 2017, Beast. What I didn’t know was that she possessed the kind of voice that could blow the roof off the joint one moment and soothe you to sleep the next. Comprised of sixteen songs, the soundtrack was mostly covers but included one original song written expressly for the film (more on that later). I listened to the whole thing in one setting. Then I listened to it again. And then one more time for good measure just to make sure it was as fantastic as I thought it was. Then I began to worry, would the film live up to the soundtrack? It’s a rare problem to have but I honestly had a fear seeing the movie would somehow break the magic this impressive soundtrack had conjured.

Thankfully, while Wild Rose may seem on the surface like a carbon-copy of every other girl with a guitar and dreams of stardom film that has been done to death (and just done exceptionally well last year with A Star is Born), it doesn’t pivot where you think it will and resists the urge to bend when you feel like it will break. Anchored by a superstar making performance by Buckley and overflowing with the kind of truthful heart you just don’t get in films these days, this is a real authentic winner.

In Glasgow, Rose-Lynn Harlan (Buckley, Judy) is returning home after serving time in jail for drug possession. Leaving her two young children in the care of her mother (Julie Walters, Film Stars Don’t Die in Liverpool) we get the impression right away being a mother isn’t her first priority because instead of running home to see her kids she first stops off for a roll in the hay with her boyfriend (James Harkness, Macbeth). Possessing a thrillingly soulful singing voice and an equally fiery personality, Rose-Lynn lives life big and loud and everyone and everything else better stand aside. Faced with being a mom to two kids that barely know her and don’t trust her, she only half tries to parent them while attempting to reignite her singing career with the hope of making it to Nashville.

Taking a job as a house cleaner to the wealthy homemaker Susannah (Sophie Okonedo, Hellboy) who isn’t aware of her past or her children, Rose-Lynn isn’t in the house a day before she’s sneaking liquor from the cabinet. While she may not be the best maid, the children of the house overhear her signing (in a creative fantasy sequence where the odd bandmember pops up around the house as Rose-Lynn is vacuuming) and pass that information along to their mother. Now fixated on Rose-Lynn as her new project, Susannah offers her an opportunity to meet influential people and get to the place she’s been longing to be…but at what cost?

Surprisingly, screenwriter Nicole Taylor and director Tom Harper (The Woman in Black 2: Angel of Death) answer these questions in a different way than I was expecting. Where one film might find a climax in the friendship between Susannah and Rose-Lynn, Taylor and Harper use that merely as a mid-way jumping off place for something more robust and fulfilling. It’s a tribute to the talented supporting players that they support the script and don’t let us get too far ahead of the action. Several times, I thought I knew where a certain scene was going only to have it come out in quite a different way.

Before it builds to its deeply satisfying finale, there’s some thorny emotional terrain to navigate and Buckley has us in her pocket from the moment she appears onscreen. I’m fairly sure she’s in every scene of the film and she’s a captivating presence throughout, even when she’s doing things that are self-destructive and counter to everything we know to be the “right” step to take. When she has her first true moment to just sing while making a video recording, it’s a transformative experience for her and the audience. It’s a flawless, note-perfect performance.

She’s matched well with two formidable actresses playing two very different mother figures. Walters yearns for her daughter to grow up and take responsibility for her children and her life, now fully at the point where she can’t hide her disappointment any longer. Okonedo comes from privilege and perhaps has some blinders on to the uphill climb Rose-Lynn is on. Yet she is still her champion, looking for ways to help her succeed by earning it and not just giving it to her on a silver platter. Both women see the talent and want her to achieve her dreams, but only one understands the extra personal sacrifices she would be making if she does.

The one original song composed for the film is performed at a key point and, paired with Buckley’s from-the-gut vocals, will likely have you grabbing for some tissues. Listen to the lyrics and how perfectly they reflect the journey – and then note the song was written by Oscar-winner Mary Steenburgen (Book Club) who may just add another Oscar nomination to her list for her work on this track. If we’re lucky, Buckley’s performance will get a push from its distributor and remembered when the end of the year rolls around. So far, this is one of the best performances I’ve seen in 2019. And if she ever decides to retire from acting, she could go into the studio tomorrow and make a hit record – I’m sure of it.