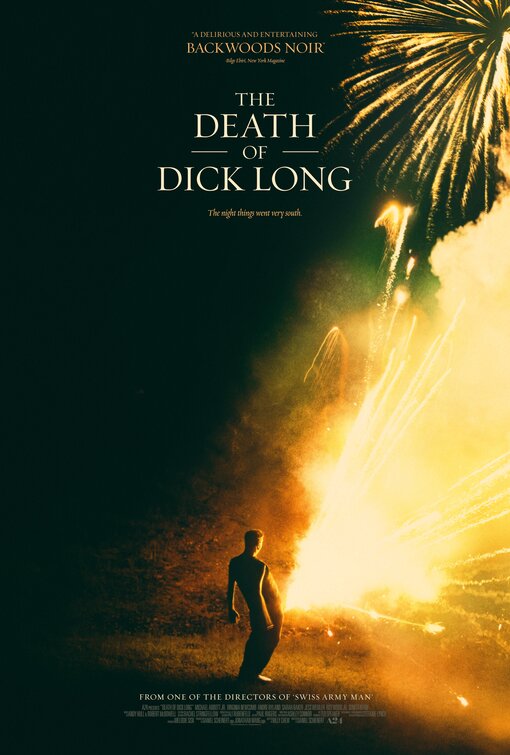 Synopsis: Dick died last night, and Zeke and Earl don’t want anybody finding out how. That’s too bad though, cause news travels fast in small-town Alabama.

Review:  Credit must be given to A24 studios for consistently finding interesting voices to add to their stable of filmmakers regardless of their wide-spread appeal.  While the studio has scored high in 2019 with their box office and/or critical hits The Farewell and Midsommar, they’ve released smaller films like Climax and Gloria Bell which can politely be described as appealing to niche audiences.  I appreciate they continue to stick with their commitment to providing a platform for new filmmakers, and it’s within that spirit of appreciation I find myself developing a curious fondness for The Death of Dick Long.

Receiving a small release at select theaters this weekend, The Death of Dick Long premiered at the Sundance Film Festival this past January and was a buzzed about title thanks to its, ah, unique central premise.  I’ve yet to watch any promotional material for this movie so I can’t say how much may have been hinted at or spoiled in advance, but I went in totally blind and didn’t have a clue what I was in for – and that’s how I suggest you approach this weird yet weirdly engaging film as well.  I will say, though, there will come a point in the movie where you’ll have to make a decision how far you’re willing to go along with the premise and as much as I wanted to suck it up, I couldn’t quite clear that hurdle and not for the reason you may think.

After their weekly garage band practice, longtime friends Dick, Zeke, and Earl spend the rest of the evening (and the title sequence) partying it up, drinking, shooting off fireworks, and carousing before retiring into a nearby building.  The next thing we know, Zeke and Earl are transporting an injured Dick to their local hospital, depositing him anonymously and then heading home.  Never thinking Dick would perish from his injuries, the men wake to a heap of trouble and find their friend dead, a bloody car to dispose of, and an array of family, friends, and law enforcement that aren’t aware of the extent of their involvement.

The first hour of the film is fun in a bumbling Cohen Brothers-esque way, with Zeke (Michael Abbott, Jr., Mud) trying to clean-up their mess only to make things worse with each lie he tells.  Keeping his story straight for his wife and child gets increasingly difficult, especially when the mother and daughter start to compare stories.  He gets little help from Earl (Andre Hyland, Popstar: Never Stop Never Stopping) a stoner working a dead-end job with a kooky sorta girlfriend (Sunita Mani) and not much to his name.  When a weary sheriff (a delightfully droll Janelle Cochrane) and her deputy (Sarah Baker, Life of the Party) take on what they think is a small missing person case only to find it snowballing into a major crime, things heat up quickly and that’s when writer Billy Chew lets the cat out of the bag.

The circumstances surrounding Dick’s death are the big mystery and I won’t reveal it here but it will throw you for a loop.  I certainly didn’t see it coming and was as stunned as many of the characters in the film are.  When Zeke’s wife (a fantastic Virginia Newcomb, Jumanji: Welcome to the Jungle) finds out, her reaction of stilted surprise will echo most audience members.  It’s after all this is revealed that Chew and director Daniel Scheinert (Swiss Army Man) find themselves painted a bit into a corner.  Once we know what happened, the movie becomes almost instantly less enjoyable and more concerning is its lack of exploration into what is quite a sensitive subject.  I can’t tell if Chew was using it as a shock plot device or if there was intention to say something bigger.  The subject has been broached in film before, but never tossed aside as quickly as it is here.

That leaves the overall enjoyment of the movie squarely on the shoulders of the actors and it’s nice to report they carry it well.  Abbott and Hyland are good foils for each other and though Abbott is the clear lead of the movie and has the more difficult surface terrain to navigate, I think Hyland is doing the more intricate work on the underneath.  It’s easy to play a pothead loser but there’s an ingrained dopiness to him that goes beyond the norm.  Newcomb has to run a gamut of emotions as Zeke’s wife and while the script has her zig zagging rather unexpectedly in her actions, she’s believably bereft of emotion when her husband makes his admission to her.  I got a huge kick out of Cochrane as the exasperated sheriff and really loved what Baker was doing as the not-quite-bright but not totally inept deputy.

I can imagine this would be fun to discuss after and my biggest regret is screening this one solo.  Without another person to turn to and ask “Did you just see that.” it doesn’t quite feel real. Now, I’ll have to wait until others have had a chance to find out about The Death of Dick Long.  It’s one that will benefit from good word of mouth but doesn’t have a few key ingredients to push it into the cult status it seems to want to be placed in.  A noble effort, but not quite there.