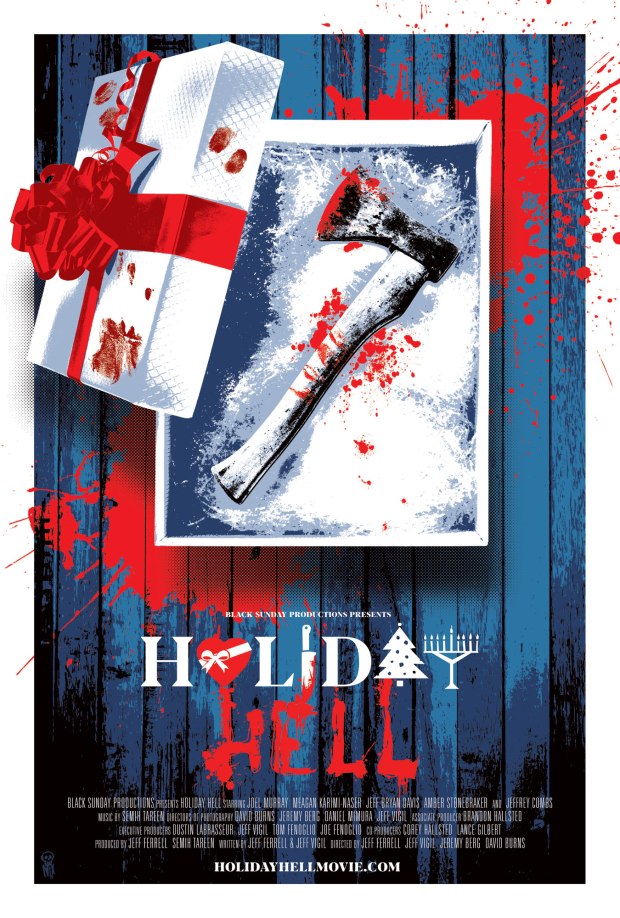 Review: I really tried to hold back from giving you another anthology during this year’s 31 Days to Scare but this was a new one that came my way and I had to give it a shot.  I get a sense these short film structured scare flicks are making a tiny comeback so count on seeing more pop up because they are easy to produce and, with a bigger budget and the ability to attract actors from a higher paygrade, can turn a quick profit.  Now, in the case of Holiday Hell, there’s little profit to be had because the film will be going direct to streaming so they’re counting on interested parties being enticed by the artwork and reading the plot summary.  Clearly that was enough to get me to check this out.  It’s not an entirely wasted evening but the low budget hampers this one quite a bit.

A woman is on the hunt for a last-minute Christmas gift and finds herself in an antique store owned by a weary shopkeeper (Jeffrey Combs, The Frighteners) about to lock up for the evening.  Desperate, she asks him to please stay open a while longer and help her pick something out.   Like other anthologies such as From Beyond the Grave, the shopkeeper is happy to oblige and offers up four objects found in the shop and the gruesome tales that accompany them.  Now, I don’t know about you but if I had the choice between a bloody Santa suit and a really nice bottle of wine, I’d take the pinot noir any day…but obviously this woman knows who she’s buying for so she’s willing to hear the shopkeeper out.

The first story involves a porcelain mask used to cover the face of a disfigured girl that lived in a house where a massacre took place.  A group of kids has broken in for a Valentine’s Day make-out session and, shocker, a killer wearing the same mask returns and stars to off them one at a time.  There’s a bit of a mystery at play here and it works for the short running length, but any interest is often spoiled by the abysmal acting.  I liked the heroine was a girl with a hearing impairment and it had a twist I didn’t spot but I couldn’t get over some really terrible performances.  The next item the shopkeeper offers up is rabbi doll from a Hanukkah-set tale.  When a boy receives the doll as a present, he uses it as protection against his babysitter who has evil plans for him.  More bad acting in this segment but, again, a decent kernel of an idea.

The final two tales are longer and begin with Joel Murray (Monsters University) as a put-upon man in a dead-end job and a nagging wife.  As Christmas draws near, he knows he’ll have to be the Santa at his office Christmas party and when he takes a new medication his company sells before he puts the suit on, he can’t foresee the murderous side of him it will bring out.  This one was pretty sleazy and felt like it was out of place in context with the others, definitely the weakest of the bunch, though I would take a gander it was likely the favorite one of the filmmakers.  The final tale actually turns the tables a bit in a nice reversal to the previous action.  A young girl takes a room in a rural farmhouse in the middle of a town that’s decidedly creepy…and has been waiting for someone just like her to fill an important role for a childless couple.

The wraparound story that fills the gaps between the tales serves up some good moments as well, which isn’t always the case with anthology films.  Instead of being a time waster in between chapters, the shopkeeper and customer are worked in nicely to the stories and into the finale of the film.  Holiday Hell ends with a bit of a thud but it at least finishes off it’s thought before the credits roll.  I like that kind of resolution better than many horror films which seem to go to black mid-scream.  Definitely a notch above most of the awful dreck often shoved in our faces around this time of year, but could have been much better.