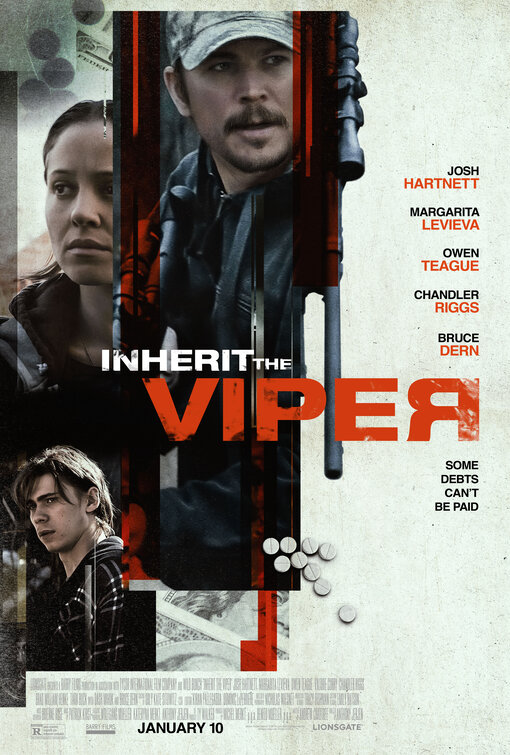 Synopsis: For siblings Kip and Josie, dealing opioids isn’t just their family business — it’s their only means of survival. When a deal goes fatally wrong, Kip decides he wants out for good. But his attempt to escape his family’s legacy soon ignites a powder keg of violence and betrayal, endangering Kip, Josie and their younger brother.

Review: I’d imagine had Inherit the Viper been released 10 or 15 years ago it may have been received a tiny bit better than it does in 2020 when its dark tale of an already fragile family dynamic torn apart by drugs feels more than a little also-ran.  It’s hard to watch the movie and not think of the countless other television series, true-crime documentaries, and other analogous indie films that have covered the same dingy terrain and done it better.  That’s not to say there isn’t room for other stories with similar themes to be told but there has to be something that sets it apart from its genre siblings and Inherit the Viper sadly doesn’t have anything fresh or revealing to add.

Things don’t get more cookie-cutter than the elements that make up the setting, players, and plot of the film, scripted by Andrew Crabtree and directed by Anthony Jerjen.  In the Appalachian mountain area (think West Virginia, because if one movie about the opioid crisis is set there, they all have to be), a family that has grown up in the shadow of their father’s drug trafficking have continued the family business to keep themselves afloat.  Kip (Josh Hartnett, Halloween H20: 20 Years Later) is beginning to grow wary of the dangers that come with the territory, having decided to settle down with his pregnant girlfriend (Valorie Curry, The Twilight Saga: Breaking Dawn – Part 2).  That doesn’t sit too well with his hard-nosed sister Josie (Margarita Levieva, The Diary of a Teenage Girl) or their younger brother Boots (Owen Teague, Mary) who has just returned home after a long absence.

As Kip is planning his exit, Josie and Boots are just getting started thinking of making their individual moves to the next level, each for their own personal reasons.  Unable to get close to anyone to have a family of her own, Josie is carrying on an affair with the married local lawman (Dash Mihok, Silver Linings Playbook), partly as an unspoken pact for him to look the other way.  Never accomplishing anything on his own, Boots struggles to escape the impression he rides the coattails of his siblings and family name by entering into a risky deal that puts his family and his life at risk.  A series of unfortunate events affecting the siblings set into motion decisions that will force them to question how strong their family ties are.

While this sounds like the makings of a film with some grit, Jerjen’s direction doesn’t have any momentum to it so it just sort of lays there and refuses to build up to anything substantial.  Even an ending that Crabtree intends as eye-opening lands with the smallest of bangs because up until that point we’ve cared so little about the characters it’s hard to muster up much emotion for what happens next in their lives.  On the good side, Hartnett and Levieva feel like they are giving the kind of performances that should be in a movie with a better script while the puzzling appearance by Bruce Dern (Once Upon a Time…in Hollywood) as a crusty bar owner feels like a phoned in favor.

Blessedly short at 90 minutes, it feels longer due to the slow pacing and development.  The long and the short of it is that there simply isn’t enough to the plot to warrant a feature length film.  Had Crabtree and Jerjen trimmed this to be a short film, I’m imagine they’d fix the problems that made this one unavoidably dull.  The more you stretch something that’s already thin, the bigger the holes become.  Inherit the Viper is a good title for a subpar film.