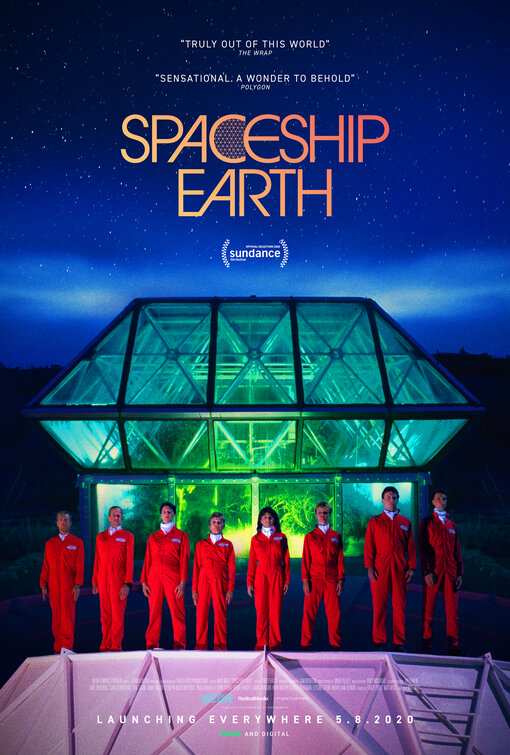 Synopsis: A true, stranger-than-fiction, adventure of eight visionaries who in 1991 spent two years quarantined inside of a self-engineered replica of Earth’s ecosystem called BIOSPHERE 2.

Review:  When I first heard there was a documentary arriving called Spaceship Earth I’ll admit that as a Disney fan I was fully expecting it to be on the creation of the ride at EPCOT Center in Florida that occupies that iconic dome in the futuristic theme park.  While my original excitement was dampened a bit (hey, I’ll take a Disney doc any day of the week on the most mundane topic!) I was still intrigued to learn more about a group of established idealists that set out to complete an ultimate test of next-level global thinking.  Also, a movie about a group of people willingly sequestering themselves (or quarantining, if you will) for two years couldn’t come at a more prescient time.

Though director Matt Wolf’s documentary is, on the surface, about the experiment known as Biosphere 2 that launched in 1991, much of the film’s running length is devoted to its genesis, starting in the 1960s California when a motley group of creative forces were gathered by a fatherly figure to form a theatrical troupe, as so many did in those hey days.  Through a truly astounding amount of archival video (it seems as if every day was captured on film for three decades), we see how these individuals coalesced into more than just a communal tribe, morphing into a business-minded collective that started their own farm, built a ship from the group up, and lived a nomadic life across the globe.  What set this group apart is that they didn’t just create and run things to ruin before pulling up stakes as we’ve seen in other failed Utopian societies.  No, this group was smart in their model and set-up businesses along the way that funneled money into their coffers to fund future investments and projects – which leads us to Oracle, AZ and the project that became known as Biosphere 2.  Recognizing Earth’s resources were limited, the group wanted to see if it was possible to replicate our ecosystem on another planet and simulate that experience for two years.

Attracting national attention and a media frenzy, the training and eventual selection of the “biospherians” was closely watched…not so dissimilar to keeping an eye on astronauts preparing for their next mission.  I was only 11 at the time so I don’t remember all the hoopla, but the clips of worldwide news coverage shows just how much of a three ring circus the experiment devolved into.  As you would expect, with all the attention, it made the stakes of the experiment even higher and that’s when problems began to arise not just for the eight people within the dome but for their supposed support staff working outside.  The dramatic rise and fall of the Biosphere 2 is hard to watch, but it stands as an example of how a good idea can go bad the more people have a say in its creation.

At this point, I’m starting to feel like I’m living in my own Biosphere with only the occasional release into the outside world so I’m betting the experience of watching Spaceship Earth now is very different than it would have been had I seen it in theaters.  Yet, it was the earlier parts of the film that showed the group coming together that stuck with me the most.  Hearing the interviewed members discuss it now, they all found something important and meaningful when they joined this initiative and whether they were designing a ship to sail the ocean or picking the plants to go in Biosphere 2, all found strength and purpose in their task.  That it doesn’t feel cult-y or nuts and berries granola helps, too.  Sure, there is dissent and some questionable ethics at times…but what group (or family, for that matter) doesn’t have the occasional squabble?  The film starts to feel a bit long and stretched for length, with Wolf trying to find some dramatic tension in situations that don’t have much energy in them.  Still — it’s hard to deny the wealth of footage is not fascinating to watch.

You can watch Spaceship Earth now on Hulu (or at theavalon.org, sunscinema.com, afisilver.afi.com, cinemaartstheatre.com) and I do suggest setting aside some time one of these nights after your work from home day is done to catch it.  It’s a great example of idealism at its most pure, though it may not have achieved its ultimate goal the experiment (and documentary) are well-intentioned and well crafted.