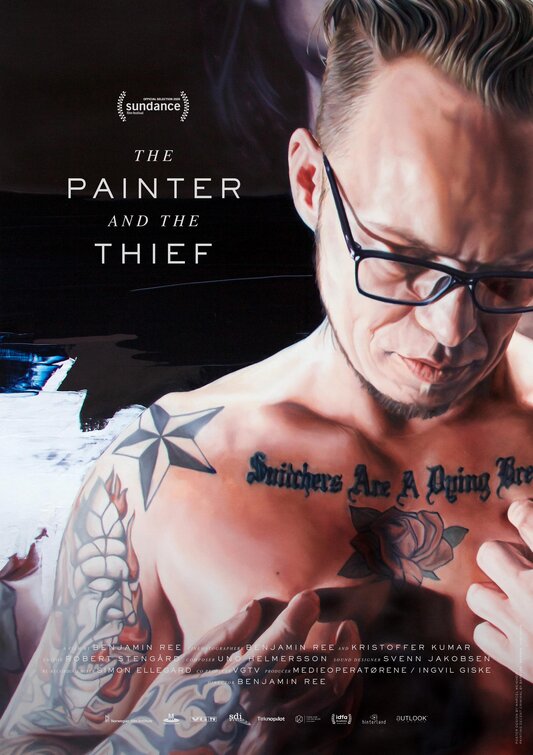 Synopsis: Czech artist Barbora Kysilkova develops an unlikely friendship with the man who stole two of her paintings

Review: With the advances of media and technology, we can now capture so much of our lives.  From the very public to the intimately private, there’s opportunities to catch the tiniest moments and it’s led to rich advancements in documentaries over the last two decades.  So instead of a documentary filmmaker having to be with the subject 24/7 they can glean footage from iPhones or video cameras set to film conversations that go for the most realism as possible.  What began as frontline footage that was often dangerous to obtain by guerilla filmmakers shining a spotlight on injustice or showcasing an underseen population is now, maybe not easier, but different to compile.

I’m a sucker for documentaries and look forward to the announcement of the Best Documentary category about as much as I do the top prizes at the Oscars every year.  Of course I love the ones that feature the glitz and glamour of the entertainment industry but I also hold a special place for the docs about human relationships that evolve over time that aren’t set in one specific time period.  Seeing the subjects age and grow (not like in movies where they are aided by make-up/technology) is documentary in its most pure form and we’re starting to see more of these labors of love as the years go by.  Even better is that while so many Hollywood movies have plots that are recycled from the same three or four formulas, you never can predict where a documentary will take you.

That’s why I was so intrigued when I first heard about The Painter and the Thief.  Here was a documentary centered on an artist from the Czech Republic recently relocated to Oslo that has two of her prized paintings stolen out of a gallery.  The men are caught and the artist forms a bond with one of the men that winds up changing both of their lives in unexpected ways.  Sounds like something right up my alley and the perfect issues for a documentary.  Right?  So why did the movie and its subjects leave me so…cold?

What I’ve been trying more and more during this time is to read as little about the films I’m watching beforehand as possible so when approaching The Painter and the Thief I knew just the basics.  Watching the film directed by Benjamin Ree I was struck by how much it felt like a narrative project and I kept having to remind myself it was a documentary and not a work of fiction.  There’s something in the way that Ree has presented the work and how the painter (Barbora Kysilkova) and the thief (Karl-Bertil Nordland) carry themselves while on camera that it comes across like everyone has a distinct awareness of what’s going on.  That tends to rob some of the drama and revelation out of what transpires, though it must be said that I don’t think it was Ree’s intention to provide this kind of emotional journey at the outset.

What I can’t seem to get over is a nagging sense of being somehow manipulated throughout into a particular path and it becomes more over the longer the film runs.  This isn’t completely out of bounds for a filmmaker to add in their personal slant, however The Painter and the Thief manages to go beyond that so the audience tends to doubt some certainties along the way.  Aside from feeling like you can’t believe the developments that take place, there are some oddities you can’t quite shake.  If we know that Karl-Bertil is the thief, why on the security footage that is captured and presented as evidence in the court is his face blurred out?

The film finds its success in its thread of redemption and it’s not just for the thief.  The artist, seemingly quick to forgive the men who robbed her, goes through her own journey of forgiveness within herself that feels like a far more strenuous battle.  And the uphill climb Karl-Bertil takes is quite incredible, you see him come back to life through the copious amount of footage Ree has whittle down to the finished film.  The final shot is a bit of a magic trick, tying up a lot of loose ends with satisfaction while opening a whole new can of worms.

You can easily imagine this being turned into a feature film and I wouldn’t doubt we’ll see this story brought to the screen within the next several years.  While I question the full range of authenticity on display for the duration of The Painter and the Thief there’s little in question that the human connection found within its framework is captured with grace.