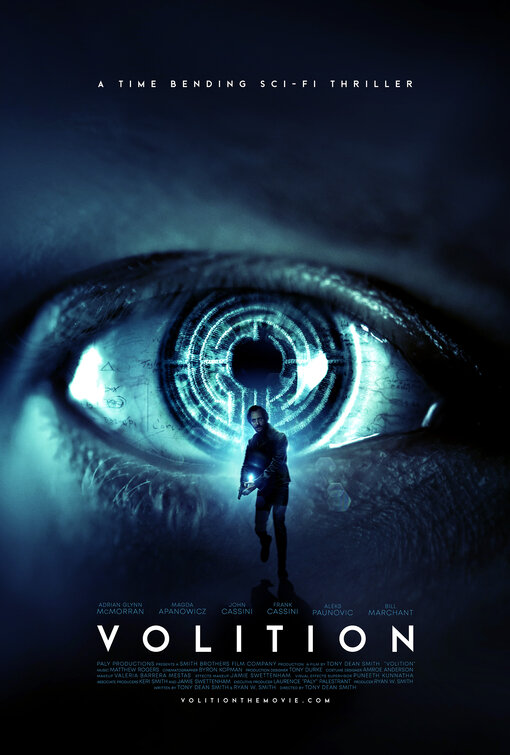 Synopsis: A man afflicted with clairvoyance tries to change his fate when a series of events leads to a vision of his own imminent murder.

Review: If I were clairvoyant, I’d already know how this review would end and would probably have known that I’d be a little late in meeting my deadline…but, such is life.  In all seriousness, whenever I was asked the question as a child if I could have any superpower in the world what would it be, it would be to see the future.  I didn’t know the word for it yet but the power of clairvoyance was always ranked higher than flying, being invisible, or never gaining a pound after eating an entire Tombstone pizza. Though we all have a little of that power within us, the best examples of clairvoyance have always been in movies and each approach to it has been a little different.

The latest take is in the Canadian thriller Volition and it’s a mostly nifty affair that overcomes its limited budget to create a real sense of atmosphere and tension.  Written by Tony Dean Smith and Ryan W. Smith (known as The Smith Brothers…Canada’s answer to The Coen Brothers?) and directed by Tony, it’s a script where every word counts and each frame holds a clue that only makes sense as the film progresses. As is the case with anything that deals with the supernatural or mystical, there’s a certain amount of suspension of disbelief required and that maybe goes double (or triple) for Volition.   You see, in the midst of wading through an already eyebrow raising phenomenon, it takes a calculated risk that the audience can handle another.

It’s never entirely clear what James (Adrian Glynn McMorran, Warcraft) does for a living but judging by the landlord demanding money for back rent at the beginning and the two thugs (Frank Cassini and Aleks Paunovic, This Means War) that bring him to small-time gangster Ray (John Cassini, Halloween H20: 20 Years Later), it can’t be too on the up and up.  The one sure thing that James explains in his voice-over narration is that he has a special gift of knowing when things will happen.  He can’t control when or how, but he’s hyper-aware of everything at all times.  Today is a different day, though, because he’s seen himself get shot and die…but who kills him?  And can he stop it?

The day brings a host of eventual occurrences for James, the first being meeting Angela (Magda Apanowicz, The Green Inferno), saving her from an attack and unintentionally getting her involved with a shady diamond deal Ray has planned.  A double-cross sets into motion a trip down memory lane for James, bringing him and Angela back to his foster parent (Bill Marchant, Godzilla) who might hold clues to more than just the vision of death James has seen.  With time running out and danger from an unknown entity approaching, James needs to use his gift to put the puzzle pieces together and solve his own personal mystery.

You know I love being as spoiler-free as possible so I think we’ll leave it at that…but I’ll add as a tease that everything I’ve talked about so far happens within the first half of the movie.  What happens in those last 40 minutes are for you to discover and I think it’s a worthwhile journey to take as you unravel the nice tangled pretzel of a plot The Smith Brothers have wrapped up in Volition.  It helps innumerably that the cast, especially McMorran and Apanowicz are so strong…though I’m less keen on Marchant who treats every slowly delivered line reading like it’s a Bergman film.

It’s definitely a movie that has moments near the end that refer back to the beginning, making me want to go back and check the math/logic to see if it works out…and I’d be surprised if it didn’t.  There’s a brazen confidence running throughout that gives the film real forward motion, leading to it feeling well-thought out and well-constructed, making the entertainment value high.  Like Christopher Nolan’s Memento, paying close attention to the details from the outset may help you make sense of it all faster…just make sure to keep up!