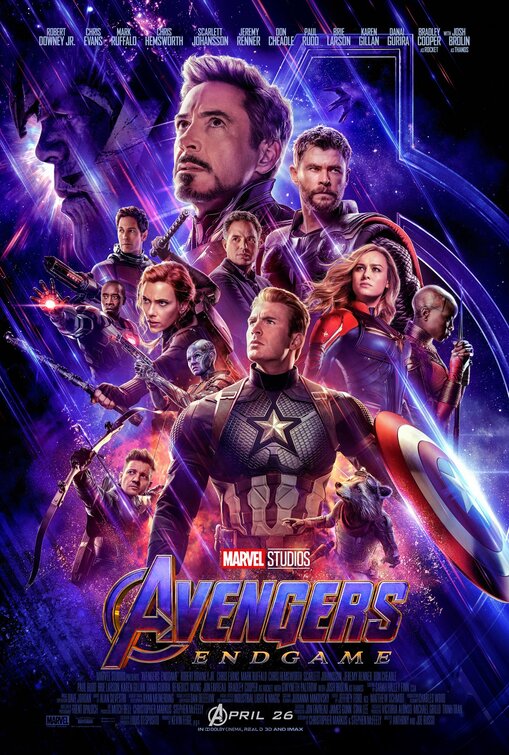 Synopsis: After the devastating events of Avengers: Infinity War, the universe is in ruins. With the help of remaining allies, the Avengers assemble once more in order to undo Thanos’ actions and restore order to the universe.

Review: My advice right off the bat for all of you planning on seeing Avengers: Endgame is not just to avoid spoilers but to avoid any liquids for several hours before the show. This will save you the hard decision on when is the best time to run to the bathroom and let you fully enjoy this grand finale from the creative minds at Marvel Studios. After 22 films and more than 10 years, the time has come to finally close the book on the Marvel Cinematic Univerise as we currently know it. Don’t get me wrong, there are certainly more stories to be told and countless movies to be made but there won’t ever be a time when all of the characters we have come to know and love (and maybe not care for at all) will be in the same film at the same time.

While this review will not contain any spoilers for Avengers: Endgame, it’s hard to discuss this movie without giving away key plot points from 2018’s Avengers: Infinity War. Read on with confidence that your enjoyment of Avengers: Endgame isn’t going to be spoiled in advance.

At the end of Avengers: Infinity War the big purple baddie Thanos (Josh Brolin, Oldboy) had achieved his goal of gathering the six infinity stones and used them to wipe out half of the population on earth. With a snap of his fingers, Thanos “dusted” some of our beloved characters who were part of the unlucky 50% that were collateral damage in a misguided attempt at population control. As seen in subsequent films Ant-Man and The Wasp and Captain Marvel, no one was spared with people either turning into particles carried away on the air or left behind to mourn their fallen loved ones.

Avengers: Endgame starts so casually (the Marvel Studios logo and title card appear at well-timed points later) that I wasn’t even sure the movie had begun. It’s like the days when you had a double-VHS to watch and just popped in the tape and things picked up right where you left off. Suddenly, you’re just back in it like a whole year hadn’t passed since the last movie ended. Picking up with a character we haven’t seen in some time, the movie quickly moves forward in establishing where our heroes are and takes its time in bringing them back together again.

Screenwriters Christopher Markus and Stephen McFeely have wisely been given the time to really explore the lasting effects on all who remain and convey to us their feeling of loss. Just like audience members were left all torn up after the snap from Thanos, so too are these super men and women who don’t know how to move on from the tragedy. While much of the 181 minute run time is devoted to amazing action sequences and visual effects that represent the tippy top of quality yet seen in these films, there’s almost an equal amount of space given to continue to give these comic book characters a dramatic arc that feel completely earned at this point.

The film kicks into high gear when an Avenger feels like they’ve figured out the key to identifying what happened to the people that disappeared…and gathers the group together for a final mission that will take them to places, emotions, and alternate dimensions heretofore unexplored. Much the way the previous film found a creative method in pairing up the Avengers to divide and conquer, directors Anthony and Joe Russo juggle multiple storylines without ever letting things fall by the wayside or allowing audiences to get ahead of the action. Two hours into the movie and I still had no idea how it was all going to end.

End it does, though, and with the kind of rousing action and developments that feel just even if they sting.   Every fan has a theory of who will survive until the credits and who might emerge as a new leader but I would say that you shouldn’t go into the movie trying to figure out how things will wrap up. Stay present in the moment and leave it to the writers and directors because they have your ultimate best interest (and entertainment) at heart.

As has been the case over the entire series of films, the impressive cast roster is what truly sets the Marvel films apart. Leading the pack is Robert Downey Jr. (The Judge) as Tony Stark/Iron Man. We’ve seen Tony grow from cocky businessman to cocky hero to cocky recruiter of future Avengers and his investment in this last film is right up there with his all-time best work. The character could easily have become abrasive and unlikable but Downey has always managed to keep him just ever so slightly on the tolerable edge as tough but lovable. There’s also good work from Chris Evans (The Iceman) who we’ve seen become a leading man before our eyes. Evans wasn’t always the most interesting actor in films but he’s shown such growth since he first took up Captain America’s shield that you know that whether he continues with the films or not (I’m not telling!) he’ll have another career in films where he isn’t always in battle with foes from space.

Continued good work from Chris Hemsworth (Rush) as Thor shows how the actor came back from having a character start off shaky until he finally found his rhythm and made the Norse god something memorable and unexpectedly funny. After two previous Hulks failed to make the role their own, I’m eternally grateful that Mark Ruffalo (Foxcatcher) was enlisted to take over way back in The Avengers. And if you can’t get enough of Scarlett Johansson’s (Under the Skin) Black Widow and her ever changing hairstyles you won’t have to wait too long as a standalone origin film centered on her and Hawkeye (Jeremy Renner, Tag) is about to go into production.

As for the rest of the supporting players, you can’t throw a gummi bear at the screen without hitting another familiar face that pops up from an earlier film – most are expected sights to be seen but there are a few nice surprises along the way. I don’t want to mention any of them but will let you pick out your favorites along the way. Even from a filmmaking perspective, this is a great looking movie that has been composed with care featuring excellent performances. There’s a somber shot near the end of the movie that calls back to that first amazing camera work in The Avengers which managed to capture all our heroes in one long swoop of action.

Filled with rousing moments (I almost got out of my seat and started jumping up and down for joy in one goose-bump inducing scene) and peppered with gasp-inducing twists that will likely have you reaching for your Kleenex, the emotional payoff in the last 45 minutes is equal to anything I can recall from the last decade. Yeah, it’s easy to dismiss this as another superhero movie in a long-standing franchise that will make billions of dollars but this is something more robust, more special.  There’s no denying that everyone involved knows they have a responsibility and shows great respect for each loose end that is tied up. It may have taken over twenty films to wrap up those loose ends but the wait was ultimately worth it. I just look forward to see what happens next.