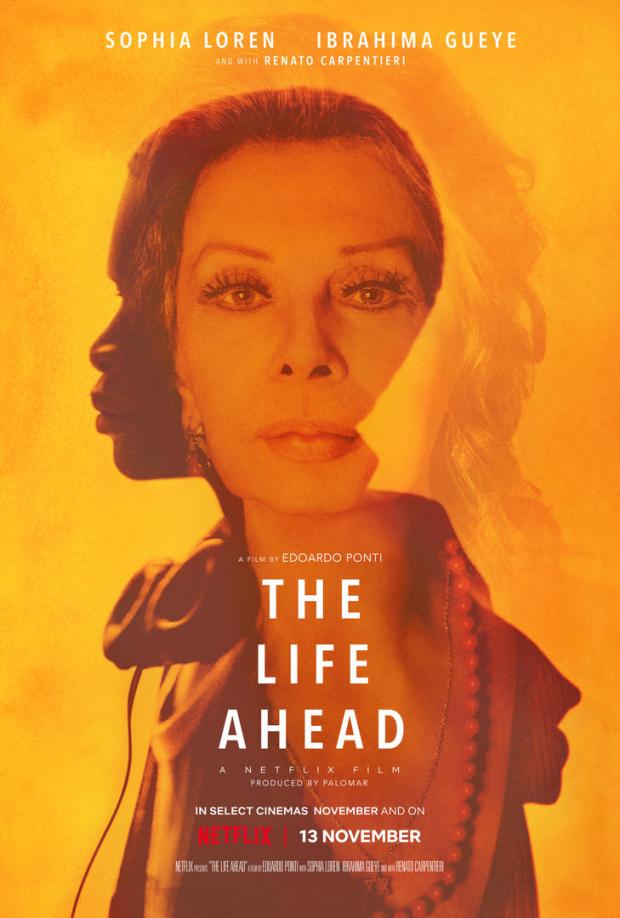 Synopsis: In seaside Italy, a Holocaust survivor with a daycare business takes in a street kid who recently robbed her. The two loners become each other’s protectors, anchoring an unconventional family.

Review:  We’ve talked about cinematic blind spots here before and how I admit to having a few glaring ones that I wear with some shame.  I’m still working on filling in my gaps of knowledge for my Akira Kurosawa and Charlie Chaplin histories but often times another will spring up, unannounced.  Well, I’ve discovered a new one that I have to discuss with you and I just realized it while watching legendary Italian actress Sophia Loren’s return to film after a 10-year absence in The Life Ahead (La vita davanti a sé), premiering on Netflix.  I didn’t think it was as bad as it was but after looking over her filmography, I am seriously delinquent in my Loren filmography.  I don’t think I’ve even seen her landmark Oscar-winning performance in Two Women (La ciociara) which made her the first foreign actor to win an Academy Award.

So, while I work on adding titles from the Loren library to my queue it’s worth noting what a life this actress has had.  Over a career that is now entering it’s seventh (seventh) decade, Loren had worked regularly up until a decade ago when she decided to take a break to focus on her family.  Married for 50 years to Italian film producer Carlo Ponti until his death in 2007, she’s returning now in a movie directed by her son in their third pairing as director/star.  Adapted from Romain Gary’s 1975 novel The Life Before Us, interestingly enough the book was already made into an Oscar winning foreign film before, 1978’s Madame Rosa starring Simone Signoret who some might claim as the French equivalent of Sophia Loren.  It’s a feast of a role and any actress worth their salt would make a banquet out of it.  Moved from the original setting of France to modern day Italy, Ponti’s The Life Ahead has brought his mother back to the screen with the same fire and passion that has made her one of cinema’s greatest treasures.

Ponti and his co-adapter, playwright Ugo Chiti, begin the film at the end (maybe) and then flashback six months prior to show how we got there.  A Senegalese orphan named Momo (Ibrahima Gueye) spots Madame Rosa (Loren) at the open air market, a pair of expensive-looking candlesticks lazily hanging out of her shopping bag.  He steals the bag, knocking her down in the process and, unable to pawn them off for cash to the local drug dealer, he stashes them with his things which is where Dr. Coen (Renato Carpentieri) finds them.  Knowing Madame Rosa as a patient, Coen brings Momo to return the stolen items…a meeting that doesn’t go well for either party.  Still, sensing an opportunity that has presented itself, Coen wonders if Madame Rosa would mind taking Momo in for a short time while Coen finds a better place for the boy to live.  Though she’s already watching over two children that have been left in her care, Madame Rose is tempted by Coen’s monetary offer and finds room for the child that doesn’t trust anyone and is sadly used to be shuffled around.

It’s not going to be hard for you to guess how this all turns out but The Life Ahead is less about the overall predictability of the friendship and deep connection that forms between Momo and Madame Rosa and more about the small moments along the way.  We get the sense that it’s been a while since anyone has cared about Momo and though Madame Rosa is brusque and has rules, tough love is still love and he needs everything she has to offer.  She, too, needs the kind of watchful and unflinching eye someone that is used to the horrors of life can take on.  A Holocaust survivor that became a career prostitute after the war, Madame Rosa has serious effects of PTSD that no one who hasn’t witnessed death firsthand could understand.  Though her past career might be seen as a black mark by some, Madame Rosa is actually a respected member of her tiny neighborhood and she uses her connections to get Momo a job with a kindly local shopkeeper, though he’s already begun selling drugs on the sly and gotten quite good at it.

What The Life Ahead does so well, especially in its modern setting, is portray a new kind of “family” in normal terms without it ever being about the difference that exist between them.  In addition to the unlikely pair, there’s a transgender neighbor (the excellent Abril Zamora) and the topic of her gender is only briefly touched upon – and it’s never an issue or pivot point for any action of great importance to the story being told.  That’s the thing about foreign sensibilities toward sexuality and class, it doesn’t interest them half as much as basic human interaction and getting under the surface to see what motivates emotion.  Everyone is treated as a person first and foremost and that gives them all an equality which rings completely true.  The only lack of development Ponti and Chiti could be faulted for are a handful of side characters, like the chief drug dealer who is portrayed as a kind of Fagin to Momo’s Oliver and the relationship is so ill-defined that it never totally worked for me.

What does work in every way is Loren’s glowing performance and Gueye as her incredible costar.  Even after all these years, Loren knows how to create the fine details of a character that tells you deeper truths that go beyond the surface.  This type of work needs no translation to come across loud and clear.  I’d go so far as to say that Gueye steals the movie from Loren, though.  What a stunning find, so honest in every scene and so natural in his instincts.  Watch a sequence where Momo joins his kingpin on the dancefloor and becomes the center of attention, you can see him come alive with confidence right before your eyes and the effect is truly magical.

All the being said, there’s something overly conventional about The Life Ahead that’s hard to shake away.  The plot feels familiar because the set-up has been done numerous times before, even if the ending is a certifiable tearjerker.  It all ends with a Diane Warren (The Hunting Ground) song that will likely be the songwriter’s 12th nomination but I’m not so sure this is going to be the one to get her over the finish line.  Don’t get me wrong, ‘Io Si (Seen)’ is another typically lush Warren soaring tune but is it as impactful as some of her other entries?  Tough call.  One thins is certain, Loren is back in the game in a big way and might find herself an Oscar nominee at age 86.  It may not be the most original and quintessential star-vehicle but you get two for the price of one in The Life Ahead thanks to Loren and Gueye’s unforgettable work.