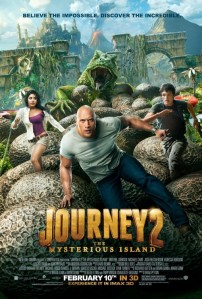 Synopsis: Sean Anderson partners with his mom’s boyfriend on a mission to find his grandfather, who is thought to be missing on a mythical island.

Review:  When the update of Journey to the Center of the Earth was released back in 2008 it was at the very start of the resurgence of 3D.  At that time it was a big-ish deal, I remember only a few theaters in the cities were equipped to show 3D and I saw it in a tiny theater at AMC Southdale.  While the effect was cool, I recall the picture being so dark that it was hard to see what was happening under your 3D (sun)glasses.  Four years on, the advances in 3D technology have allowed viewers to see a brighter picture but only movies actually filmed in 3D have the kind of quality you’d expect for the medium.  The good news is that Journey 2: The Mysterious Island was actually filmed in 3D and not post-converted like The Avengers, Wrath of the Titans, and John Carter will be.  The bad news?  The effects are the only thing to recommend about this mind numbing adventure flick that is rudderless and colorless.

Within the first ten minutes, our lead character Sean (Hutcherson, the only hold over from the original) has crashed his bike, fought with his mom, showed some serious ‘tude to his stepdad (Johnson), bonded with his stepdad over their mutual love of deciphering secret codes, and traveled with his stepdad to Palau to search for titular mysterious island.  Sounds like a movie that hits the ground running, right?  Well…sorta.  The movie not so much goes for broke out of the gate but does so without any thread of logic or purpose.  We get zero backstory on what life is like for Sean – only that he’s ‘really unhappy’ and ‘misunderstood’…so a trip to Palau with his stepdad will be the best possible way to recitify that, right?  According to the movie the answer is “Sure, why not…take a trip!”  It’s understandable that the film needs to get to the goods as soon as possible but there had to be a better way to kick things off than the utilization of some eyeball rolling dialogue and breakneck pacing.  Johnson has never been the most dependable actor but he takes several steps back with this role…as does Hutcherson who looks to just be treading water until The Hunger Games comes out in a month.

In Palau, the two men meet up with Hudgens and her father (Guzman).  For a PG movie, Hudgens assets are on full PG-13 display here…with her tank top seeming to shrink each time she gets wet.  By the end of the movie her cleavage has gone from zilch to so deep that it could be another cavern for Sean to explore.  Her character is pointless to the action because she’s never used as the “girl in peril’ or the ‘tough girl that don’t need no one’…she’s a mere pawn for Sean to moon over in between fighting off large lizards and flying on bumblebees.  Guzman has played this type of role for forever so there’s not much to report out on aside from the fact that he’s saddled with some amazingly embarrassing one-liners.  Here’s hoping he was rewarded with a nice check for his efforts.

The only breath of life the movie can muster is Caine as Sean’s grandpa.  Clearly not a fan of the stepdad, he trades some nice barbs with Johnson before the writers forget about him and turn him into a fool that can’t read a compass.  Caine has a way of making his material work (this is the man that wasn’t present to accept his Oscar for Hannah and Her Sisters because he was filming Jaws: The Revenge) and you can almost see him mentally shopping in SkyMall for all the duty free items he was going to buy with his earnings.  Of all our characters, he’s the one that elicited some genuine laughs from the crowd.

The special effects and 3D are employed well here.  The technique not only gives depth to the island but is used to great success when showcasing the strange inhabitants that our players encounter.  Is it necessary to see it in 3D?  I’d say that it probably is because that’s the way it was filmed and intended to be seen.  Without it you’re just sidling up for a silly adventure that’s forgotten as soon as the credits roll.  Using the works of Jules Verne, Robert Louis Stevenson, and other famed adventure novels as it’s jumping off point…this Journey is less of a direct sequel to the original and more of an amalgam of the ideas of these seminal works.  Too bad that director Peyton can’t make this movie half as good as the novels it takes its inspiration from.

The best thing about the movie really was what preceded it….a new Looney Tunes short.

Daffy’s Rhapsody was a welcome throwback to the Looney Tunes shorts of yesteryear.  Moving away from hand-drawn to computer animation, the short is a nice romp with Elmer Fudd and Daffy as Fudd takes in an opera that Mr. Duck is the star of.  Quickly getting his hunter-blood boiling, Fudd gets out his rifle and sneaks around the stage while Daffy is aria-ing his ducky little heart out.  While I question the effectiveness of using the end of a rifle barrel as a showcase for 3D, it was still interesting to see these characters onscreen again in all their 3D glory (Daffy, in particular, looks great!)