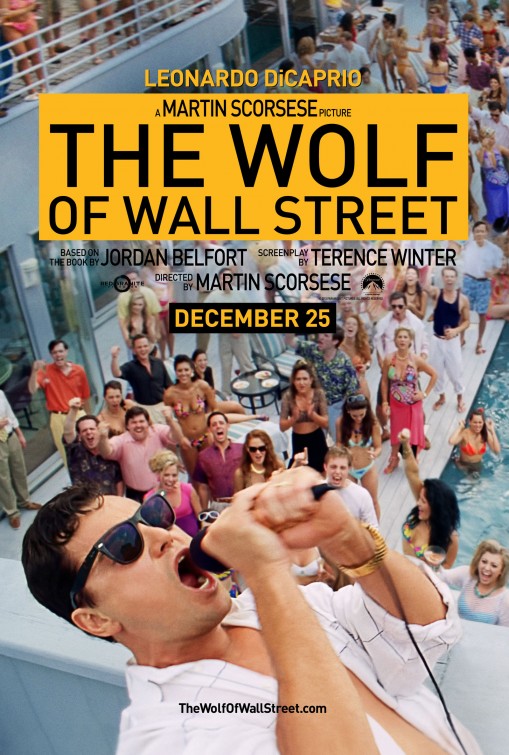 Synopsis: Based on the true story of Jordan Belfort, from his rise to a wealthy stockbroker living the high life to his fall involving crime, corruption and the federal government.

Review:  After making a brief detour to PG-rated family friendly fare with 2011’s wondrous Hugo, director Martin Scorsese (Cape Fear) makes up for lost time with the ribald and very R rated The Wolf of Wall Street, a film arriving with much buzz due to the pedigree of the director, its starry cast, and its butt-numbing running length that will test the bladders of even the strongest leg crossers amongst us.

When asked by a few friends what my initial opinion of the film was, I responded with “it’s an entertaining 135 minute movie that unfortunately runs for 179 minutes” and that’s probably the most succinct review I can offer for Scorsese’s excessive and excessively long opus looking into the boom of Wall Street in the late 80’s/early 90’s.

Let’s start with the good, shall we?  That would be Leonardo DiCaprio (Titanic), an actor I usually have little patience for due to his penchant for playing variations on the same role.  With 2012’s Django Unchained, however, the actor showed some sinister dexterity that was appealing to watch and which should have netted him an Oscar nomination.  Though earlier in 2013 audiences and critics were divided on Baz Lurhman’s 3D take on The Great Gatsby, it was generally agreed that DiCaprio’s vulnerability in the leading role was one of its saving graces.

So it’s nice to see that DiCaprio once again shines as Jordan Belfort, an upstart stockbroker that easily is sucked into the dizzying world of money and all the trappings (booze, drugs, women, etc) that seemed to go with it.  The layers DiCaprio adds in addition to Terrence Winter’s hefty dialogue are admirable and more than a few times I found myself getting lost in the film thanks to the conviction and brio DiCaprio brings to the role.

Also making a good showing is Margot Robbie (About Time) as Belfort’s second wife that isn’t much of a pushover.  It’s nice to see a female character in a Scorcese film portrayed as more than just a wife or sex object (though Robbie is one of many, many, many actresses in the film that is seen fully nude) and there’s a dynamic chemistry between Robbie and DiCaprio that gives the film some extra oomph when needed.

In addition to DiCaprio and Robbie I also enjoyed some comically dry turns from Matthew McConaughey (Dallas Buyers Club, Mud), Kyle Chandler (The Spectacular Now), Rob Reiner (The Mystery of Belle Isle), and Oscar winner Jean Dujardin (The Artist)…actors that Scorsese uses to his advantage whenever the movie needs a boost of energy (which happens quite often in the bloated second and third acts).

I’m leaving Jonah Hill (This Is the End) for last because now we’re into the elements of the movie that didn’t work for me.  Hill’s puffy stockbroker colleague of DiCaprio is nearly governed by his costume choices (day-glo sweaters, loafers, large glasses), his impeccably white teeth that give him a beaver-esque quality, and a nasally New Yah-k whine that started to give me stroke symptoms as the move droned on.  The early word was that Hill was set for another Supporting Actor Oscar nomination (after 2011’s Moneyball) and if that’s the case then I’m clearly missing something because I found Hill to be drastically out of place, however believable his connection to DiCaprio’s character was.

Then there’s the length…good lord the film is overlong.  Even the casual moviegoer would have been able to edit at least 30-35 minutes off of this monster and I’d challenge anyone to sit through the film twice and not find the exact moments where Scorsese and longtime editor Thelma Schoonmaker should have excised large passages of dialogue and story that had no bearing on what happens later in the film.  I don’t mind long movies…but they have to have a reason for being long and there’s absolutely no rationale for the movie to lumber on as long as it does.  And keep in mind the film was already edited down from an even longer cut…a task that moved the original release date from its original Thanksgiving release schedule.

Scorsese is truly one of the most legendary filmmakers out there and while The Wolf of Wall Street isn’t a turkey, it’s not one of the director’s best thanks to a curious lack/slack of pace.  I’ve always found Scorsese’s films to be taut experiences, no matter the genre but I get the feeling Scorsese couldn’t come to a decision on what he was trying to reveal in the life story of Belfort so he simply left in most everything that he captured during filming.  Removing 30 minutes would have made Scorsese’s film truly howl and been an even better showcase for DiCaprio’s well thought out performance.  It also would have monumentally reduced Hill’s role which is what the film very much needed…a sacrificial lamb for this Wolf to be a winner.

One comment on “Movie Review ~ The Wolf of Wall Street”