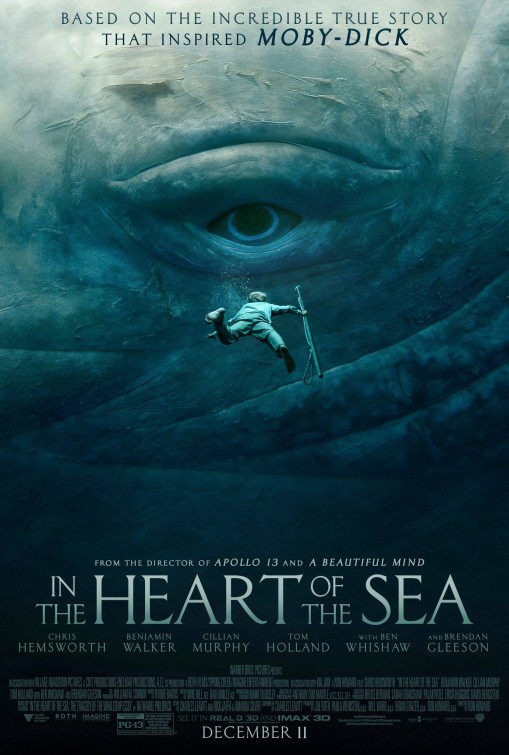 Synopsis: Based on the 1820 event, a whaling ship is preyed upon by a giant whale, stranding its crew at sea for 90 days, thousands of miles from home.

Review: I finished the book that In the Heart of the Sea was based off of mere hours before I caught its big-screen adaptation and it’s probably the reason why I didn’t like it as much as I maybe would have had I not recently experienced Nathaniel Philbrick’s well-researched book.  Philbrick’s historical recounting of the tragedy of the whaleship Essex was a straight-forward piece equal parts storytelling and instructional guide.  Details about the whaling industry, on-board dynamics, and deeper looks into the backstories of the characters was something no film could capture fully…so it’s hard to blame the filmmakers for diverting so far away from the truth.

Well…actually…there is some blame to be had here because what was already a storied tale of survival on the high seas has been unnecessarily Hollywood-ized.  Events have been falsified, details overlooked, and certain aspects have been downright made up to serve…who?  Not the lovers of historical fiction that made the book a bestseller, that’s for sure.

Unwisely adding bookends to the piece featuring a young Herman Mellville (Ben Whishaw, Paddington) interviewing one of the survivors of the wreck (Brendan Gleeson, Song of the Sea) as he researches what will become his celebrated novel Moby Dick, the film starts off on the wrong foot by including this imagined meeting.  Historically it doesn’t make sense, just the first of many ill-advised missteps.  The old man recounts his time aboard the Essex (including scenes where he wasn’t even present) which ran afoul of one massive whale that destroyed the ship and set a band of survivors in lifeboats to fend for themselves on the harsh open sea.

After seeing the equally disappointing Unbroken last year, this survival against all odds seems a bit been-there, done-that so screenwriters Charles Leavitt, Rick Jaffa, and Amanda Silver take some major liberties with the historical facts and add in events that never happened.  In the film, the whale returns several times to taunt/terrorize the men hanging onto life when in reality the massive mammal appeared only once when it originally capsized the Essex.  While the extra whale sightings may add some fairly nice tension to the mix (Silver and Jaffa wrote Jurassic World so they know how to craft a creature attack), knowing that it never happened pushes the film into Jaws: The Revenge territory.

There are other false happenings that I won’t spoil for you here…but the more the story took untrue turns, the less I cared about the film as a whole.  Director Ron Howard (Parenthood) reteams with his Rush star Chris Hemsworth (Cabin in the Woods) and the results aren’t nearly as notable.  Hemsworth is a stiff actor and while his physical appearance may have made him an ideal candidate on paper for the headstrong sailor he’s playing, his performance never makes it out of the bilge.  Also feeling a bit lost is Benjamin Walker (Abraham Lincoln: Vampire Hunter) as the combative Captain, in the book he’s a social leader done in by his inability to lead by example but here he’s a brat at sea.

The film was shot in 3D and it’s used to good effect here.  Unfortunately, much of the film is CGI-d to death so it can feel like you’re watching an animated film at times.  The camera is constantly moving so those prone to sea-sickness may want to take a Dramamine before embarking on this voyage.

When it was delayed from its intended release in March of 2015, many thought that the studio was positioning the film to play big on the high seas of awards season…but the final product is a total land lubber, unable to find its sea legs.