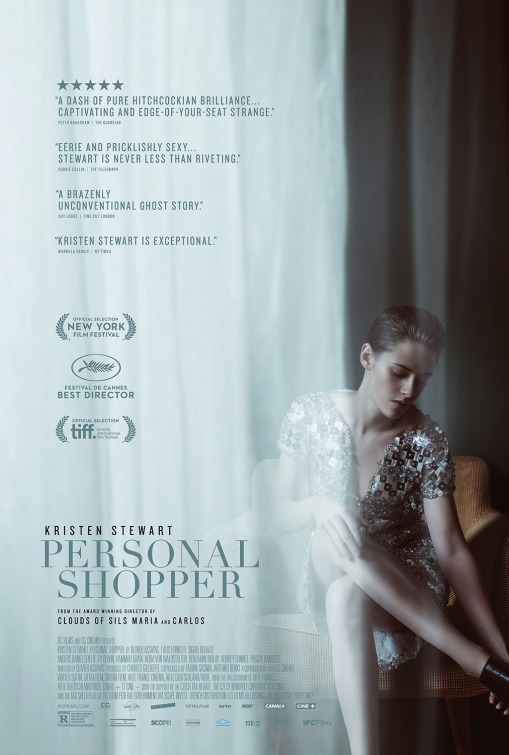 Synopsis: Revolves around a ghost story that takes place in the fashion underworld of Paris.

Review: I think we’re getting to the point where we can get past that Kristen Stewart headlined the Twilight franchise, right?  I mean, it’s time to recognize that she wasn’t the cause of all that misery she just collected a paycheck for it.  Sure, her off screen persona is decidedly aloof and she doesn’t smile a lot…but to deny admitting she’s a strong actress seems so very 2012.  After directing you to 2014’s Clouds of Sills Maria, I’d introduce Personal Shopper as Exhibit B in my defense case in the People vs Kristen Stewart.

While Personal Shopper is a lesser film than Clouds of Sills Maria (for which Stewart won France’s prestigious Caesar Award, becoming the first American actress ever to do so), this second collaboration between Stewart and director Oliver Assayas features the actress in nearly every frame of the movie.  Capably holding our focus for the entirety of its running length, Stewart (Snow White and the Huntsman) finally headlines a project that seems not only to be her cup of tea but one that plays a game she’s fully invested in.  She disappeared halfway through Clouds of Sills Maria and her absence was felt but she’s entirely captivating here as Maureen, an assistant to a tabloid-friendly superstar we barely see.

Scarier than you might expect with some legitimate jolts to your nerves, Personal Shopper is both a ghost story and a plaintive drama wrapped up in one Gallic package.  Opening with Maureen alone in a creaking manse as she tries to make contact with a spirit thought to be haunting the joint, we eventually learn she’s trying to make a connection to her recently deceased twin brother.  Both twins had a touch of the medium in them and with his sudden death, Maureen needs closure before she can move on with her life.

As she waits for another opportunity to locate his spirit, she spends her days traveling through Paris and beyond to pick up/out clothes and accessories for her employer.  The deeper she digs the more compact the movie becomes and before you know it, mysterious texts from an anonymous phone number tease of something sinister afoot and soon she’s involved with a murder.  To say more would spoil what Assayas has in store for you but it wouldn’t give much away to say that, in typical Assayas fashion, much of the the mystery is left for the audience to decode on their own.

Perhaps a bit too slow for most (I could see this being a bang-up 50-minute short film), I wasn’t ever bored by the movie and the performances (including Stewart) are off-kilter just enough to keep you guessing without dismissing them outright as merely bonkers.  Much of the movie is focused on the lengthy text conversation between Maureen and the mystery caller and this could have been an interminable bore had Assayas’s script not been so taut. I definitely was left with some questions but the more I thought about it the more I realized that the questions were far more interesting than the potential answers — that makes for an overall rewarding experience.