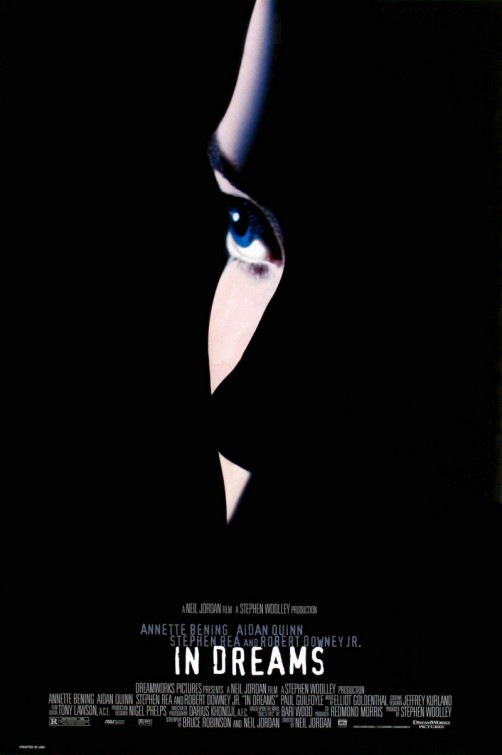 Synopsis: A suburban housewife learns that she has psychic connections to a serial killer, and can predict this person’s motives through her dreams.

Review: I wanted to say right off the bat that I’m giving In Dreams a higher score than it probably deserves…or even has rightly earned despite some good intentions. While the overall movie feels like a bit of a clunker by the time is gets to its overblown third act, leading up to it there are some interesting ideas and certainly some intriguing performances.

Based on the novel Doll’s Eyes by Bari Wood (but supposedly wildly different in plot) this one comes to us via Neil Jordan, the writer/director of The Crying Game and screenwriter Bruce Robinson (Jennifer 8). Jordan takes a page from his cult favorite The Company of Wolves and frames In Dreams as part fairy tale, part horror show. Starting strong with visuals of a town that was flooded to make way for a reservoir that’s now the dumping ground for a psychotic killer, Jordan spends the first 45 minutes slowly building the tension but loses his grip when the line between dreams and reality get too blurred.

In the same year she’d go on to receive an Oscar nomination for American Beauty, Annette Bening (Girl Most Likely) is kinda a mess as a wife and mother who discovers she has a psychic link to the person that’s been abducting little girls and leaving their bodies underwater. Bening has grown into such a dependable presence on screen, especially in these last 10 years, but In Dreams was released when she hadn’t quite found her zone yet. She’s either cool and collected, purring her lines to her befuddled husband (Aidan Quinn, Blink) and skeptical shrink (Stephen Rea who should never, ever, attempt the New Yahk accent he tries out here) or she’s totally unhinged, laugh-crying her way through Robinson and Jordan’s chuckle inducing dialogue.

Her performance isn’t even the most bizarre one on display. No, that would be Robert Downey Jr. (The Judge) as the serial killer toying with Bening and her family. With his hair dyed red and peering at us from behind green contacts, Downey Jr. nails the creepy part of his role but can’t make head or tails of what else he should be doing. This was long before Downey Jr. had his Marvel renaissance and the actor seems fairly adrift here.

There’s some decent atmosphere created, scenes shot in the town underwater and a sinister apple orchard are nice showcases for Darius Khondji’s (Magic in the Moonlight) cinematography and Bening’s visions are nicely done. There’s even an ominous staging of Snow White in the forest starring the actress playing Bening’s daughter and about a three dozen other cherubs. It all adds up to a movie that looks great and has some spooky moments but one that eventually makes absolutely no sense at all…especially a poorly thought out finale that feels like it was reshot late in the game. In reality, In Dreams is a bust but there’s so many good people involved it’s worth watching at least once.