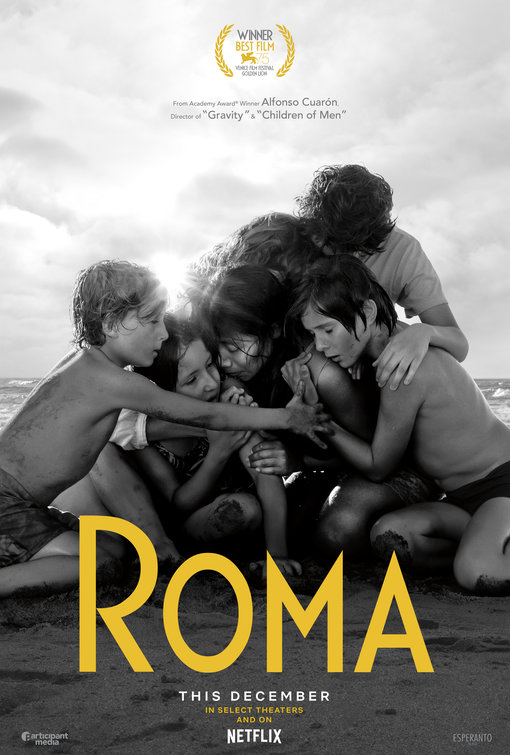 Synopsis: A story that chronicles a year in the life of a middle-class family in Mexico City in the early 1970s.

Review: In a strange sign of the technological age we’re living in now, one of the most epic cinematic accomplishments of the year will likely be seen by most people first on their televisions, iPads, or (yikes) their smart phones.  Though it was given a small theatrical release for a few weeks and can still be seen in cinemas for those that live near a metro area, Alfonso Cuarón’s Roma debuts for everyone else today on Netflix.

Taking place over the course of a year in the 1970s, Roma is Cuarón’s loosely autobiographical look back at his time growing up in Mexico City and the relationship his family had with their housekeeper.  Throughout the year we track the family as they go through growing pains and internal fractures, all seen through the eyes of Cleo, their maid.  As played by newcomer Yalitza Aparicio, Cleo has a quiet grace that suggests a world-weariness when it comes to practical matters but a striking naiveté in matters of the heart.  Over the year we get to know her, Cleo will experience her own journey (literally and figuratively) as she navigates the treacherous terrain and emotional complexity of first love.

The family takes up most of the air during the scenes inside the house but anytime we venture outside their gated walls the film explodes with sounds and sights, vividly relayed in Cuarón’s own gorgeous black and white cinematography.  There’s a freedom to these sequences that parallel the more staid existence of Cleo’s life tending to the family.  Her employers and their children are never cruel in a stereotypical movie way to her and often treat her like she’s a family member.  All tread a fine path that blur the lines between employer and employee, culminating in an emotional climax you think is the end of the film but leads into a finale Cuarón uses to drive home a bittersweet reality.

As a follow-up to his Oscar-winning work on Gravity, Roma is a bold move for Cuarón.  Not only has he taken a huge risk by teaming up with Netflix at a time when the internet service is vying for a place as a legitimate movie studio but he’s telling a deeply personal tale that doesn’t have the same commercial prospects as his previous work.  He’s cast a lead with no prior acting experience (Aparicio is a true revelation) and delivered a 2+ hour black and white movie entirely subtitled for home consumption where people’s attention span isn’t at its most focused.  Yet it’s this kind of risk-taking that has made Cuarón such an accomplished craftsman over the years and why Roma works on every level.  From the opening shot to a nerve shredding sequence ¾ through the movie that I won’t spoil for you, to the very last credit you see, this is Cinema with a capital C.

Big screen or small screen, there’s little doubt this is one of the finest movies of 2018 and one that deserves your full consideration no matter how you choose to take it in.  I was lucky enough to see it on a huge screen without outside distractions so was able to take in the sheer size of Cuarón’s masterful vision of his youth.  I’m interested to view it again on my television to see how the experience changes things, if at all.  I suspect the small but mighty performances might play even better at home while some of the majestic shots Cuarón devised might lose some impact.  If you can get to the theater, I strongly suggest making the effort.  If you can only see it from the comfort of your own home then please turn off all the lights, turn your phone off, and let the film take you away for 135 minutes.  It’s worthy of your undivided attention.