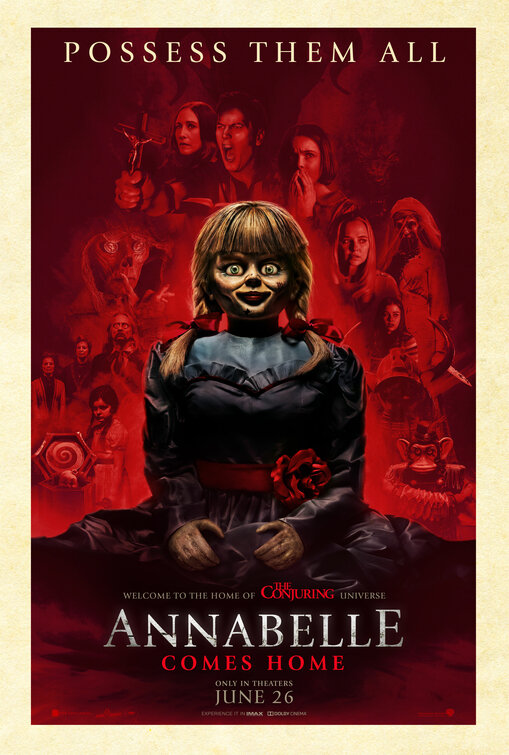 Synopsis: Determined to keep Annabelle from wreaking more havoc, demonologists Ed and Lorraine Warren bring the possessed doll to the locked artifacts room in their home, placing her “safely” behind sacred glass and enlisting a priest’s holy blessing. But an unholy night of horror awaits as Annabelle awakens the evil spirits in the room, who all set their sights on a new target-the Warrens’ ten-year-old daughter, Judy, and her friends.

Review: When I first heard the filmmakers behind The Conjuring were interested in creating a universe of their own which would do for horror what Marvel did for superhero comic book movies, I was pretty dubious as to how it would all pan out. I mean, The Conjuring was such a perfect scare machine that its unexpected success with audiences, critics, and the box office of course meant a sequel would be produced but were there enough good ideas to truly expand it into something bigger? Moreover, would the real life case files of paranormal investigators Ed and Lorraine Warren continue to be used or would new poltergeists haunting houses be unearthed?

The first attempt out of the gate was 2014’s lackluster Annabelle, a direct spin-off from The Conjuring centering on the scary doll. The film had a creepy vibe but failed deliver anything more than surface shockwaves. While The Conjuring 2 in 2016 had its moments of excellence it came down with a case of sequel-it is and overstayed its welcome. Then, a minor miracle occurred in 2017 with the release of Annabelle: Creation, which managed to improve upon its predecessor by some truly terrifying leaps and bounds. Consider how well put together that film was and how nicely it managed to fold in elements from all the films that came before, it felt like the filmmakers took in the criticism received from the previous films and made the changes necessary to keep this universe expanding.

Now, something very strange and special is happening within The Conjuring Universe as it continues to grow as a rapid pace. While 2018’s The Nun and The Curse of La Llorna from this past April stumbled a bit (but still did good numbers at the box office), things are back on the terror track with the release of Annabelle Comes Home, another strong entry that bodes well for the future of this franchise. Employing a healthy dose of atmosphere long before the real scares begin, it rewards longtime fans of the series and invites newcomers in with a wicked grin.  While it largely benefits from the jump scare, there are an equal amount of frights that come when you least expect them and plenty of misdirects to goose your bumps nicely.

So far, each Annabelle tale has found an interesting way into the timeline of the events in the history of the Warrens and this one is no different. The prologue for Annabelle Comes Home begins right after the prologue from The Conjuring when we were first introduced to the doll that had spooked a couple of college co-eds. Ed (Patrick Wilson, Aquaman) and Lorraine (Vera Farmiga, Godzilla: King of the Monsters) are taking the troublesome toy back home to their room of once (and still?) possessed artifacts for safekeeping, but Annabelle doesn’t make the journey an easy one.  The trip back presents car trouble for the Warrens and, wouldn’t you know it, they break down right outside a cemetery inhabited with spirits drawn to the doll.

Once locked away safely, things stay relatively quiet where Annabelle is concerned until Ed and Lorraine leave their daughter Judy (McKenna Grace, I, Tonya) under the care of Mary Ellen (Madison Iseman, Goosebumps 2: Haunted Halloween) while they go to an overnight conference. While Mary Ellen is a responsible caregiver, she’s friends with Daniela (Katie Sarife) who is more interested in the Warrens profession and poking around in their artifact room than baking a cake and entertaining Judy for the night. She’s not just looking for a cheap tabloid thrill either, there’s a reason why Daniela wants to know if the supernatural afterlife is real. Left alone in the house while Judy and Mary Ellen try out a new pair of roller skates (this is the ‘70s, remember?), Daniela snoops her way into trouble when she accidentally lets Annabelle out. Once the doll is free, she brings an assortment of crazed curios from the Warrens unholy collection out to play as well.

In the past, the more sequels a movie gets the less time these installments seem to take on set-up and exposition before launching into what audiences are craving for. That’s not true with the films in The Conjuring Universe. At 106 minutes, the movie isn’t in any rush to get to the unleashing we all know is bound to happen and that allows director Gary Dauberman the opportunity to let us get to know these characters a bit more. Peppered with creepy moments for the first hour as we see the Warrens leave the girls for the night and Daniela taking her need for emotional closure in the spirit world one-step too far, when the movie does reach its apex it takes off like a rocket and doesn’t let up.

Popping up over these last several years in small roles proving herself as a dependable young actor, Grace is an ideal lead as the Warrens only child. Maybe possessing some of the same gifts as her mother, Grace paints Judy as struggling to fit in but not unware that maybe she’s one keeping people at a distance. Her sisterly friendship with Mary Ellen is believable and Iseman too turns in a winning performance as the smart, responsible babysitter that doesn’t let a pining boy (charming Michael Cimino) in because she’s already committed to spending time with Judy. Though at first glance Sarife’s role looks like the bad girl there to cause all the trouble and pay a huge price, the script by Dauberman (who also did good work with IT) and James Wan (Insidious) has bigger (and surprisingly emotional) plans for her in the long run.

While Annabelle Comes Home doesn’t ultimately land with the same electric punch as Annabelle: Creation, it’s still a resoundingly worthy entry in this growing universe. If the scripts continue to be creative and the casting remains strong, I can see these doing good business if the interest is still there. Looking ahead we have The Conjuring 3 in 2020 and then nothing firm yet for the next slate of films and I think that’s a good thing. Let’s see how these movies land and then figure out where to go from there.  Something tells me Annabelle has more untold stories waiting to get a big screen scream treatment.