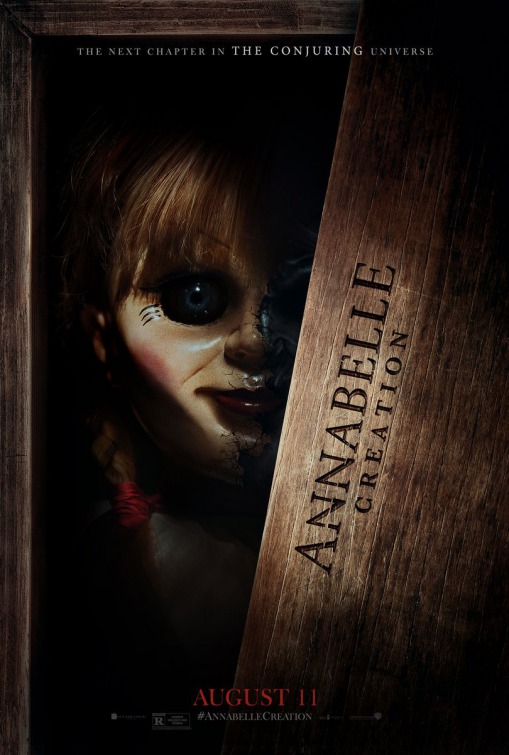 Synopsis: Several years after the tragic death of their little girl, a dollmaker and his wife welcome a nun and several girls from a shuttered orphanage into their home, soon becoming the target of the dollmaker’s possessed creation, Annabelle.

Review: In 2013, James Wan’s The Conjuring gleefully scared the bejeebus out of me and a bunch of other movie-goers that had been disappointed with horror movies for years. Smartly made, terrifically acted, and with significant replay value, it signaled a turning of the tides from the torture porn popularity of the Saw films into something with a bit more meat on its bones. Basically, it classed up the joint. Building off that film’s popularity and while waiting for Wan to deliver The Conjuring 2 in 2016, Annabelle was a quickie spin-off developed and released in 2014. Focusing on the freaky doll that was featured in the prologue to The Conjuring, it was clearly a cash-grab . Though it was competently made, it lacked the will to scare and wound up being a disappointment in my book.

With The Conjuring expanding into its own cinematic universe ala DC Comics and Marvel, a prequel to the spin-off sequel is here and it’s doozy. Annabelle: Creation is, as implied, an origin story and rights every wrong committed by its predecessor. The scares are there in droves, the acting is better than it has any real right to be, and director David F. Sanberg (Lights Out) brings some serious style to the proceedings with inventive cinematography and taut pacing. Best of all, it manages to connect to all the films that came before it and hints at what terrors await us in the future.

The prologue of Annabelle: Creation introduces us to the Mullins, a happy family living on the outskirts of a country town. Producing handcrafted dolls in his workshop, Mr. Mullins is putting the finishing touches on his newest wooden wonder when tragedy strikes and his daughter is killed in a car accident. Twelve years later, after they are forced out of their orphanage, a nun (Stephanie Sigman, Spectre) and six orphans in her charge come to live with the Mullins. This act of charity has deadly consequences for all when the girls start to experience strange occurrences all centered on a doll discovered locked away in a room lined with pages from the Bible.

An isolated house. A dumbwaiter with a mind of its own. A creaky stair-lift. A character that wears a porcelain mask to hide disfigurement. A battered scarecrow. There are so many warning bells going off in Annabelle: Creation that the audience and the characters are keen to and honestly that’s part of the fun. While there’s a mystery central to the story, it’s not complex enough to poke a bunch of holes in nor slight enough to write off as baloney.   Sandberg and screenwriter Gary Dauberman (IT) have taken extra time to flesh out most of the characters without sacrificing pace or the attention of the audience.

Unexpectedly, where the film shines the most are the performances with the children often surpassing the adults. Talitha Bateman (The 5th Wave) and Lulu Wilson are convincingly strong leads with Bateman offering the right amount of pluck as a child crippled by polio while wide-eyed Wilson colors her growing fear with a nice dose of moxie. I struggled with the flat line readings of Sigman’s nun at times but she grew on me before the movie was over. Anthony LaPaglia (The Client) and Miranda Otto (What Lies Beneath) as the grieving parents harboring a dark secret do a lot with what little expository dialogue they have and their presence here gives some good grounding to what could have been a cheap-o scare-fest.

Fans of this series will get a few surprises from previous films and make sure to stick around until the end of the credits for a little teaser of the next chapter in this burgeoning library of horror.