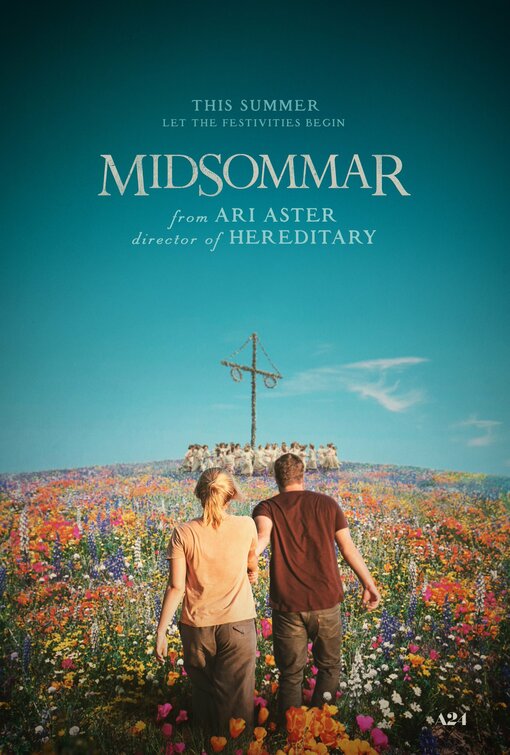 Synopsis: A couple travels to Sweden to visit a rural hometown’s fabled mid-summer festival. What begins as an idyllic retreat quickly devolves into an increasingly violent and bizarre competition at the hands of a pagan cult.

Review: For all the unfettered glee I feel every time a new horror movie comes out, such as the recently released Annabelle Comes Home, and as much as I love a gooey creature feature like the upcoming Crawl, I must admit to experiencing an overwhelming bout of anxiety when staring down a screening like Midsommar. It’s not just because I knew it clocked in at nearly two and a half hours, either, but it’s something about films of this particular genre of horror that I find deeply unsettling. Watching what should be idyllic slowly turn into a nightmare with no escape is what I imagine it must feel like to be in a pot of water slowly brought to a roiling boil.

Though it feels like it’s been out longer, it’s only been a year since writer/director Ari Aster dealt his first major blow to my nerves with Hereditary. The 2018 jaw-dropper came out of the festival circuit with a great deal of buzz and mostly delivered on its promise of classy scares wrapped up in a family drama. Lead by an astoundingly terrific performance by Toni Collette, the movie only stumbled in its final moments. The first time I saw the film that final misstep was enough for me to dismiss it almost completely but revisiting it later and watching it with a more holistic view of the characters I found more to appreciate in Aster’s vision. I still really hated that ending, though.

My hope is that you haven’t been inundated with trailers for Midsommar yet and my advice is to avoid any additional previews or clips for the film before seeing it. That way, you can let the tension build at Aster’s pace and not be waiting for particular images or sequences you already know are coming. This is a deliberate movie that takes it’s time toying with the audience and I’m guessing that’s going to alienate the shifty moviegoer that expects a scare every ten minutes. Like Hereditary, Midsommar isn’t in any rush to reveal its secrets or play by a standard set of rules.   Also similar to Aster’s previous work, his sophomore film makes some strangely calculated missteps that have the completely wrong effect on the audience at the worst possible time.

Before the title card pops up, Aster has already given the audience a taste of the kind of emotional toll the movie will take. Still reeling from a recent trauma, Dani (Florence Pugh, The Commuter) is invited by her boyfriend Christian (Jack Reynor, On the Basis of Sex) to tag along on a summer trip to Sweden with his three friends. All are attending a midsummer festival in the remote village where Pelle (Vilhem Blomgren) grew up. Anthropology student Josh (William Jackson Harper, All Good Things) feels this is the perfect subject for his ongoing thesis while Mark (Will Poulter, We’re the Millers) is there for the girls and life experience. Already on the fringe for being seen as Christian’s emotionally troubled girlfriend, Dani’s presence adds a layer of fraught tension into what was to be a freewheeling trip of a lifetime.

Arriving in the commune as the nine day celebration is about to begin, the group is welcomed with open arms by the friendly folk and are eventually introduced to the culture and rules of the land. Right off the bat, the weirdness of the place is palpable but Aster wisely tempers that by having Dani and her friends not turn into crass, ugly Americans. Instead, they are presented as identifying the customs as strange but recognizing a cultural specificity they just might not understand immediately. This helps the audience, too, in accepting why the visitors don’t pack it up and hit the road the moment the first ominous event occurs.

I’ll stop with giving away more of the plot at this point because once the festival truly begins all bets are off and nothing can really prepare you for what happens. Yes, some of the events are probably what you think they are but there are more turns that you won’t be able to see coming. I wasn’t able to watch several parts of the film, the visuals were just too upsetting and not simply because of any violence or gore but because of some emotional sadness that is attached to what occurs. Like Hereditary, there’s little pleasure to be derived at what befalls the characters (good or bad) and by the time the film ended I was appropriately rattled.  Make no doubt about it, as extreme as Hereditary was in parts, Midsommar aims for a higher squirm factor and achieves it with fairly little effort.

Without a strong lead, the film wouldn’t have been as effective as it was and Aster lucked out again with a perfect star. Pugh is still gaining momentum in Hollywood and no matter how well this does at the box office I expect the movie to help increase her cache for future projects. While it doesn’t afford her quite the satisfactory journey as Collette was given in Hereditary, there’s plenty of meat on the bone for Pugh to chew on. Reynor’s character is trickier and without giving too much away you have to get to a certain place with him for the climax to work and I didn’t quite make it. Still…major kudos to him for participating in a scene that will likely be the most talked about and shared on the internet. The rest of the cast is strong as well, with particularly good attention paid to the casting of the villagers. Down to the smallest walk-on role Aster has chosen people that I completely believed were a part of this tribe.  Extra special notice to Gunnel Fred as Siv, the materfamilias of the commune that welcomes the outsiders in and then expects their full participation as the festival reaches its most pivotal ceremony.

Do I feel the movie could have been shorter? Sure, I mean two hours and twenty minutes is a long time to spend with these themes and this type of extreme experience. It’s an unsettling film and while it takes an unfortunate turn near the end that elicited mood-shattering laughs from the audience, it manages to get back into its lane by the time the credits roll. With Hereditary, I was willing to give it another go because the family dynamics were something I was interested in exploring a bit more. While I enjoyed Midsommar and understood its themes, I’m not certain it’s one I could see again…there’s just too much sadness involved.  Still, if you can stomach it and have a hunger for elevated horror this is one to seek out and sink down into.