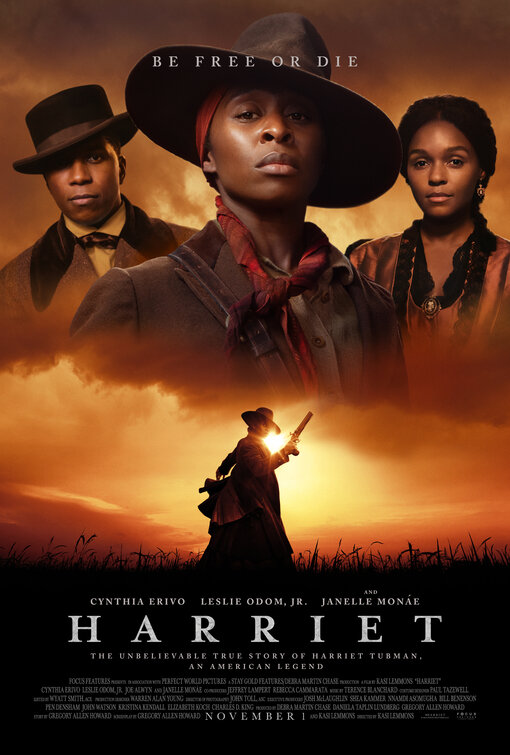 Synopsis: The extraordinary tale of Harriet Tubman’s escape from slavery and transformation into one of America’s greatest heroes, whose courage, ingenuity, and tenacity freed hundreds of slaves and changed the course of history.

Review:  It’s been over 40 years since the last time there was a movie about the life of Harriet Tubman.  I had to check to make sure because I couldn’t quite believe her story hadn’t been told at length on film since the 1978 television movie A Woman Called Moses starring Cicely Tyson.  Yet, it’s true.   Though Tubman has had a bit of a resurgence in the last few years having been featured on the now-cancelled series Underground and was chosen to replace notorious slave-owner Andrew Jackson on the $20 in 202 (though those plans have now been put on hold because the current administration happens to like Jackson where he is), she’s been out of the verified mainstream for too long.

It’s been some time since I was in an American History class and I’m ashamed to admit I don’t know as much as I should about the key players in the Underground Railroad movement that helped so many slaves move toward freedom.  Tubman is one of the most well-known conductors on the Underground Railroad, that much I did know, but how she came to become a part of that network was an educational lesson I sorely needed a refresher course on.  While I know it plays a little fast and loose with the timeline, the new biographical drama Harriet, is a straight-forward depiction of Tubman’s life as she escaped from slavery in Maryland and made her way to safety in Philadelphia.

Beginning shortly before she flees the plantation she’s lived on with her parents and siblings since she was a child, we meet Harriet (Cynthia Erivo, Bad Times at the El Royale) as she’s having one of her “spells”. Suffering a head injury when she was young, she often will fall into a trance like state where she’ll receive visions she interprets as guidance by a higher power of things to come.  Married to a free man, Harriet wishes to be free herself and have children born outside the burden of slavery but when she’s denied that right and is put up for sale by Gideeon (Joe Alwyn, Boy Erased) the smarmy son of her late master, she knows she has to take freedom into her own hands even if that means leaving everything she loves behind.  A well-staged escape is designed for audiences to lean forward in their seats, even though we know the outcome.  Her eventual first step to freedom is the first of many moving moments in the film.

Director Kasi Lemmons (who had supporting roles in Candyman and The Silence of the Lambs before turning to directing) wrote the screenplay with Gregory Allen Howard (Remember the Titans) and the two manage to pack a lot of events into a trim 125 minutes.  Obviously, this can’t possibly cover everything of importance in Tubman’s life so audiences are given a surface skim of the next years as Tubman arrives in Philadelphia and meets William Still (Leslie Odom Jr., Murder on the Orient Express) the abolitionist that came to be known as the Father of the Underground Railroad.  She also takes a room in the boarding house of Marie (Janelle Monáe, Welcome to Marwen) a free-born black woman that hasn’t had the same struggles as Harriet but through her friendship comes to understand her pain.

While this film may get dinged a bit for it’s workmanlike way it moves through Tubman’s life events, I found the way Lemmons and Howard chose to focus on her accomplishments instead of her setbacks really refreshing.  So often with movies about the horror of slavery directors feel a need to wallow in the cruelty and ugliness of that abhorrent period in our American history.  Instead of having the obligatory vicious scene of a whipping or lynching, Lemmons and cinematographer John Toll (Cloud Atlas) catch us off guard when a character takes off their shirt and reveals their scars from a previous lashing.  Seeing these reminders that will never fully heal or when Harriet recounts a beating when she was young have more of an impact the way they are presented than if we were to bear witness to them play out in real time.  Same goes for the way Lemmons reserves the use of the “n” word to punctuate a character’s hate, not make it their defining manner of speech.

Lemmons and Howard also capitalize on Erivo’s talents as an award-winning singer and feature her gorgeous voice throughout the movie.  In addition to Erivo writing and performing a song over the closing credits there are carefully selected spirituals or call outs during the film that are moving in their sound but haunting in their purpose.  While I’m not sure how historically correct it is, I’d even say Lemmons and Howard seize some opportunities to turn Tubman into a bit of an action star, with Erivo slinging a gun and hauling off a few shots from the back of a horse.  I say more power to them because it only added to the audience’s appreciation to the film.  For each nuance they give Tubman (Erivo’s headstrong portrayal is a brilliant head-to-toe transformation you won’t be able to take your eyes off of) they seem to take two or three away from other actors like Alywn or country star Jennifer Nettles playing his deeply indoctrinated mother.  Though under no obligation to give depth to characters that offered little hope or free-thought to others, Lemmons and Howard have etched out little pieces of informed info about nearly everyone else that to have these two figures so blank is curious…or maybe it’s precisely the intent.

Since her feature directing debut in 1997 with the unforgettable Eve’s Bayou (rent it, trust me, just rent it), Lemmons has been a little hit or miss in her efforts but she’s scored another win with this engaging look into the life of one of the most important women, or person, in American history.  I’d likely have sat for another twenty minutes or so had Lemmons and Howard wanted to take a little more time in the middle or even at the end for a bit more of a measured wrap up of events.  It ended a little abruptly…or perhaps I just wasn’t quite ready to leave off in Tubman’s story.  Even if Harriet doesn’t quite dig as deep as it could have, it’s a captivating film made even more enthralling by a lead performance that truly soars.