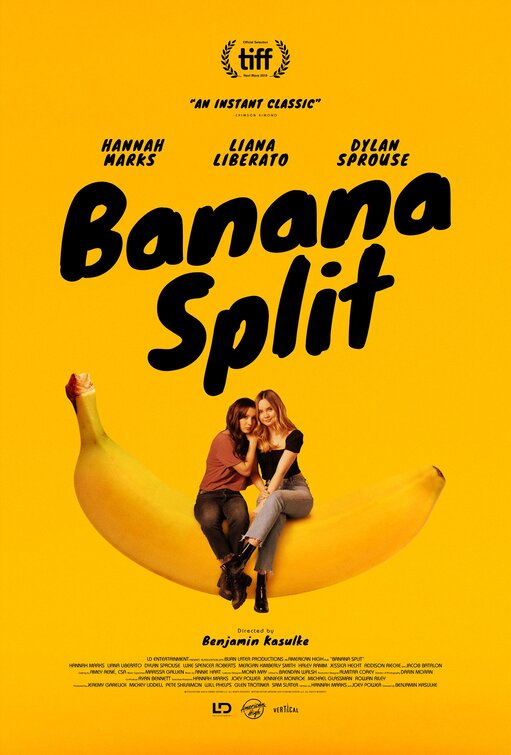 Synopsis: After a messy break-up with her high school boyfriend, April strikes up an unexpected friendship with his new girlfriend, Clara.

Review: While 2019’s Booksmart may not have found the audience Amazon Studios was hoping for, it’s critical acclaim certainly helped films like Banana Split land a release on a platform wider than the indie festival circuit.  Originally showing up in mid-2018 to decent reviews across the standard run of film fests, the movie, written by star Hannah Marks (Daniel Isn’t Real) and Joey Power, took some time to get further motion and one can only blame the deluge of familiar feeling coming of age comedies around that time for its delay.  Thankfully, now that we all have a little more time on our hands thanks to these new stay at home orders there’s a chance people will be able to discover this guilt-free treat.

Marks stars as April, a recent high school graduate that’s just broken up with her high school boyfriend (Dylan Sprouse, Big Daddy).  Maybe he was The One, maybe he wasn’t.  Yet he was something special and we all know what that’s like not knowing for sure if it was right to part ways with someone.  An opening montage shows us the complexities of their first meeting all the way through their break-up, like a version of the tear-stained beginning of Up maxed out on teenage hormones.  As both go on with their lives during the summer before entering college, April finds a new friend in Clara (Liana Liberato, To the Stars) and they find a fast camaraderie with an instant bond.  There’s just one problem…Clara is Nick’s new girlfriend and he doesn’t know the two of them are friends.

There’s a whole lot of ways Banana Split could take these characters and I was happy to see Marks and Power not take the expected route most of the time.  I grow so weary of all these depictions of high schoolers as nothing but hard partying pill-popping drinkers that rebel against the norm just because.  The characters in the world Marks and Power have created are definitely more adult than their age implies but it’s done in a believable way that comes with real emotional consequences for their actions.  Marks hits the, uh, mark well with her supporting characters too…from geeky third wheels to annoying siblings to parents that want to do right but don’t want to smother.  Each have their own representations in previous films but there’s a special angle given to each supporting subtype here that makes it feel fresh.  The film is also funny, poignant, and quite observant of male-female friendships but putting the emphasis nicely on the delicate dealings between two females that share common interests and one eternal flame.