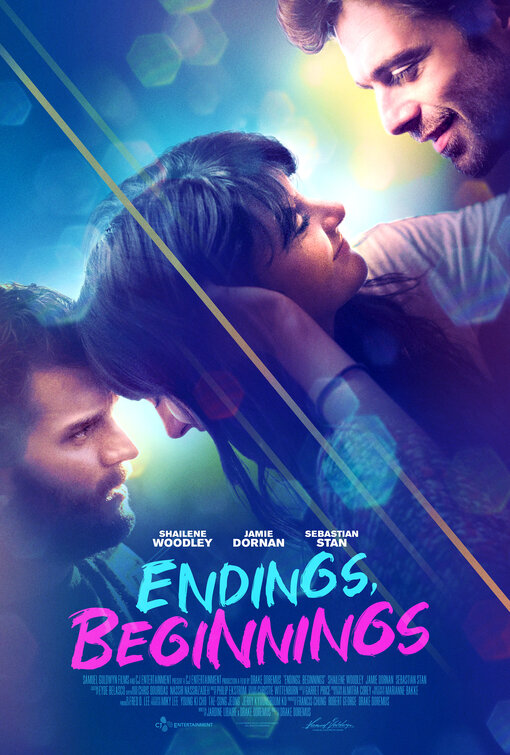 Synopsis: A Los Angeles woman unlocks the secrets to her life after meeting two handsome best friends at a party.

Review:  When I was growing up, if I disappointed them the most crushing thing my parents could say to me was “We love you, we just don’t like you right now.”  Even though it still reaffirmed that they cared for me (and my parents were awesome and endlessly supportive through my many flights of fancy) and highlighted that my actions had an impact on how people perceived me, losing that bit of luster even for a moment was heartbreaking.  While movie characters aren’t quite on the same level as letting down your family, I found that phrase popping up often while watching Endings, Beginnings.  I truly like most of the actors in the film, I just didn’t like any of their characters.

It’s the story of Daphne (Shailene Woodley, The Fault in Our Stars), a California artist moving back into the pool house of her sister and brother-in-law after breaking up with her latest boyfriend.  You get the sense she made the decision to end things but is already having second thoughts because she can’t quite get him (or a hazy encounter with another unidentified man) out of her mind for much of the film.  Deciding to go cold turkey on men and alcohol for six months, she looks for work but finds it hard to stay away from her vices for long.

That’s when she meets two men in quick succession.  Jack (Jamie Dornan, Fifty Shades Freed) is a slick success story that charms the side of Daphne that craves stability while the handsomely rumpled Frank (Sebastain Stan, I, Tonya) meets her needs for satisfying love without deeper emotion.  Both, on their own, might not be all that she is looking for but together they provide a yin and yang that leaves her feeling whole.  Writer/director Drake Doremus (Like, Crazy, Equals) gives this modern love triangle a few sharp edges but the crux of the decisions Daphne has to make tend toward the soap operatic the more involved she gets with both men.

For a time, Endings, Beginnings creates a dreamy mood that invites you into Daphne’s world and that’s due in large part to Woodley’s charisma which continues to shine through.  Though she’s never been as good as she was in her star-making turn in 2011’s The Descendants (WHY didn’t she get an Oscar nomination, I ask you?), she has a good showing here even making the semi-improvised dialogue not sound like remnants from an acting class exercise.  The longer the movie goes on, though, the less you relate to the character because she stops being somebody real and morphs into a creation that could only happen in the movies.

As the men in her life, Dornan and Stan provide at least some interesting stakes for her to gamble on, even if they seem to exist only to get her to hop off the wagon of no men and no drinking.  That they actively push her to drink and don’t always respect her boundaries is a little off-putting, to be honest, and feels just a tad antiquated in a film as modern as this purports to be.  In small supporting turns (too small for my taste), Wendie Malick (Scrooged) has a few nice scenes as Daphne’s mom and the always reliable Kyra Sedgwick (Man on a Ledge) shows up as a friend in Daphne’s weekly art clutch.  I’m so used to seeing Malick playing vamp-y women that it was a nice change of pace to find her so restrained and while Sedgwick’s character seems designed only to spout sage advice and then disappear, at least she breaks up the monotony of scenes with Daphne and her men.

One more thing before I go.  I don’t know why I noticed this but the amount of smoking in this movie was absolutely obscene.  I’ve never mentioned this in any review before because it hasn’t been something that’s caught my eye but I swear I could smell smoke emanating from the screen at times because there are so many cigarettes consumed ad nauseam by Daphne, Jack, and Frank.  It’s used so much, I half expected it to be a plot device later in the movie…spoiler alert…it’s not.  I guess I just find it surprising that a filmmaker in 2020 would choose to feature this vice so prominently when it isn’t essential to any character or plot element.

For Woodley’s performance, I would give this a cautious recommendation with the caveat that the film gets markedly weaker as it goes along before completely disintegrating.  Here’s hoping Woodley gets another chance soon to play a mature character like this and can sink her teeth into a script that meets her step for step – she’s obviously willing to go the distance in her performance.  Now let’s get her something solid to work with.