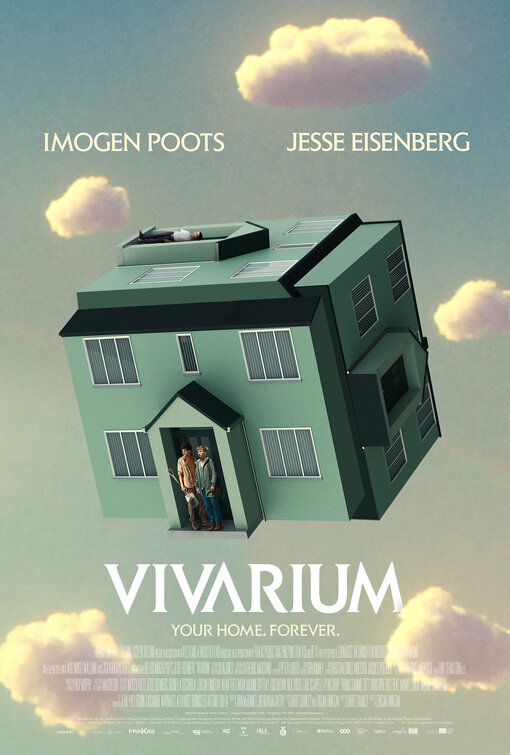 Synopsis: Hoping to find the perfect place to live, a couple travel to a suburban neighborhood in which all the houses look identical. But when they try to leave the labyrinth-like development, each road mysteriously takes them back to where they started.

Review:  There’s a great show on Netflix that I’m sure you’ve heard of: Black Mirror.  It’s a nice little analysis of the dark side of advances in technology and while the creators have found interesting ways to drop slight ways that episodes are tied together, they are by and large stand alone tales that are often disturbing and eerily prescient.  Watching the overlong and overstated Vivarium, I kept thinking back to the efficient way that Black Mirror (or even old shows like The Twilight Zone or The Outer Limits) were able to condense their thoughts and ideas into a concise statement rather than ramble on with little to say above and beyond their logline.  I get a sense that writer/director Lorcan Finnegan and his co-writer Garret Shanley had a good nugget for an episode of a TV show here but unwisely were advised to expand on it and make it feature-length.  The result is a film that begins intriguing but quickly turns tedious.

Young couple Gemma (Imogen Poots, Green Room) and Tom (Jesse Eisenberg, The End of the Tour) are looking to buy their first house together and have heard about a new development nearby that might be good to get an early jump on.  A robotic but benign salesperson (Jonathan Aris, All the Money in the World) lists the benefits of the manufactured community but feels it’s better just to show them around the neighborhood instead so they follow him, not paying any real attention to where they are headed.  When the salesperson disappears halfway through the tour and they can’t seem to find their way back to the main road, they are forced to spend the night in the model home…the first of many, it turns out.  Unable to leave the neighborhood and eventually trapped within their own hell house, the couple tries to escape by any and all means necessary.

At 97 minutes, Finnegan and Shanley only have so much room (and characters) to throw at audiences and sadly the usually reliable Poots can’t shoulder the entire movie on her own.  Eisenberg is his typical low-key milquetoast, prone to fits of anger when provoked but mostly an uninteresting presence.  So it falls to Poots to keep us tuned in and there’s just not enough going on in the neighborhood to make us want to stick around.  If it were only 45-50 minutes, I could see this being a tighter and more engaging watch that wouldn’t allow us time to check out watches.  Add in the appearance of a character prone to a deafening primal screech when they don’t get their way and you have the recipe for a movie that gets its eviction notice long before the credits roll.