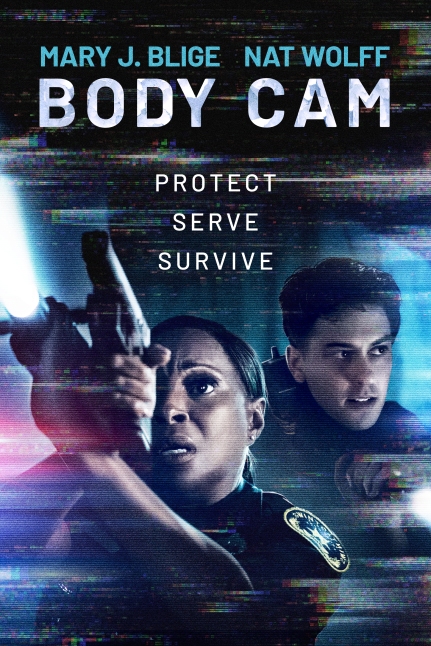 Synopsis: When a routine traffic stop results in the unexplained, grisly death of her colleague, a cop realizes footage of the incident will play for her eyes only. As the attacks mount, she races to understand the supernatural force behind them

Review:  Before this whole pandemic, when you heard a moving was “skipping a theatrical release” that was often industry code for a turkey being served up to audiences as a TV dinner instead of as a restaurant meal.  The film likely had a rough gestation and the studio wasn’t confident it would be able to see a marginal return on its investment during the opening weekend, even if some sliver of good word of mouth could propel it forward.  All the big studios would have one or two of these movies a year and no big name star or project was totally immune from it.

If there’s one good thing to come out of this recent pandemic, it’s that this swift shift to streaming isn’t looked on as a death knell as easily as it was before.  This could be the studio simply wanting to keep pushing content out in a slim market to eager consumers tiring of the binge watch instead of just the usual content dump.  With a severe lack of new movies coming out week to week we’re already seeing movies that otherwise would have been overlooked do quite well thanks mostly to their availability, to say nothing of their overall quality.

That’s one way to look at the recent quieter than usual release of the supernatural cop thriller Body Cam, a movie I just heard about a few weeks ago when Paramount released a not entirely gripping trailer.  Starring music icon and two-time Oscar nominee Mary J. Blige, it was originally meant for a summer release but was made available mid-May with VOD to follow in June.  Now, a movie that would surely have been dismissed quickly had it played in your local multiplex has an opportunity to be evaluated within a different set of qualifiers.  Despite being tiresomely formulaic at it’s core, it isn’t half bad.

Back on the active duty after an altercation with a civilian earned her an eight-week suspension, Officer Renee Lomito-Smith (Blige, Rock of Ages) is paired with rookie Danny (Nat Wolff, Semper Fi) for her first night back.  The two are first on the scene where a fellow cop was murdered by a supernatural force we got a brief glimpse of in the film’s opening sequence.  Renee sees it too in the dashcam footage that mysteriously is erased when her superiors try to view it later.  After more murders take place that involve members of the force, Renee launches her own private investigation and brings Danny along with her, eventually leading to a missing healthcare worker (Anika Noni Rose, Ralph Breaks the Internet) who has suffered a terrible loss.  As Renee gets closer to discovering how the worker is tied to her fellow cops, her own troubled past which she’s tried to shut away comes back to haunt her…in increasingly terrifying ways.

You get the feeling watching Body Cam that it’s a mash-up of two scripts that were missing key elements.  The original writer, Richmond Riedel, is known more as an editor and while the producers brought in Nicholas McCarthy (The Prodigy) to rewrite the material, it never quite succeeds as either a cop thriller or supernatural horror film.  Though McCarthy has a firm foothold in the horror genre based on his resume, you’d think he would have been able to tip the scales toward creating a better terror mythology to liven up an otherwise realistic movie.  I kept expecting a twist regarding Renee that never came, and I think viewers savvy to this type of movie will know what I mean…though maybe with The Woman in the Window coming out shortly that angle was a bit passé.

Thankfully, director Malik Vitthal delivers in several key spooky sequences, knowing just when to reveal frights and not going for cheap scares.  As is the case with so many of these movies, people go where they shouldn’t go and for the love of God why do they insist on heading into a basement without turning all the lights on just because they hear a floorboard creak?  The violence is surprisingly gory, with one especially graphic make-up effect being particularly chilling – the image stuck with me long after the movie ended.  Brief attempts at social commentary regarding relations between the police and minorities feel shoehorned in and the movie would be far more interesting (especially considering where it winds up) if more attention was paid to this very pertinent topic.

A titan in the music industry who has long earned her title as the Queen of Hip Hop Soul, Blige still isn’t as strong an actress as she is as singer.  That tentativeness works at times with this character who is riding the edge of emotional trauma; it was a strange dichotomy of a performance. I completely bought her as this cop on a mission but for the most part her line readings come off as strangely stilted.  This isn’t meant as a dig but Blige is best when she wasn’t saying anything at all.  Her reactions to what was going on and when she is in pursuit were the most intriguing part.  The oddball relationship with her and Wolff was interesting to see develop and I wish we got to see more of Rose throughout the film.  Actually, in a perfect world Rose and Blige would have swapped roles because Rose is silent for the majority.  It goes back to the script being half-baked and not fully developing Blige’s emotionally bruised cop/mother as much as they could – there’s little resolution to either side of her persona by the conclusion.

At 96 minutes, the pacing in Body Cam could be tightened up a bit, especially in the final act with a totally unnecessary epilogue but the take away is that this comes across as an easy-going weekend watch.  Joining other recent above average on demand thrillers like 1BR, The Wretched, and We Summon the Darkness, it has the requisite thrills to make you consider turning the lights on and enough of a plot that you won’t completely put it all together before our leading lady does.  It may turn out to be rather routine but up until a certain point, it has its moments.