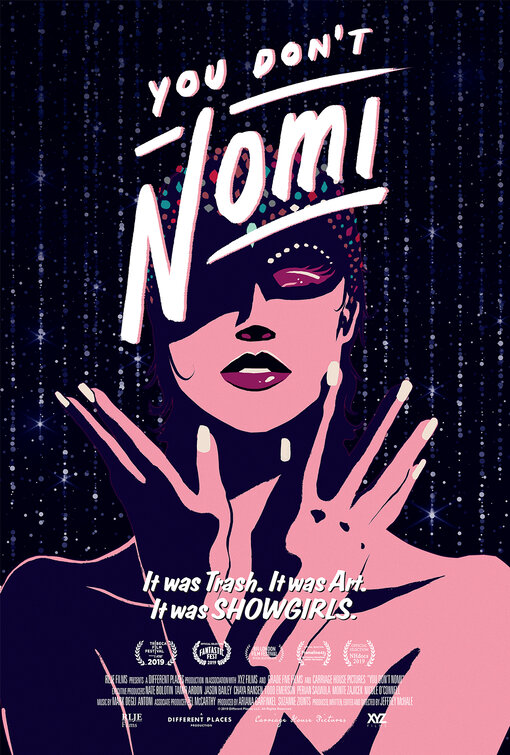 Synopsis: Showgirls was met by critics and audiences with near universal derision and this documentary traces the film’s redemptive journey from notorious flop to cult classic, and maybe even masterpiece.

Review: Arriving with a storm of controversy and the dreaded NC-17 rating, Showgirls was released in theaters across the country on Friday, September 22 1995. That was 25 years ago now but I remember exactly the new movie I saw in cinemas that opening weekend: Seven.  That’s right, The MN Movie Man was underage so he could see Seven with his dad (who let me see a whole bunch of movies I shouldn’t have) but wasn’t old enough to catch the movie he really had his eye on.  Oh, it killed me not to be able to know what was going on inside Screen 4 at the Edina Theater when I was right next door seeing Brad Pitt and Morgan Freeman hunt down a devious serial killer.

Alas, my exposure to Showgirls came later on VHS when I was allowed (again, yay permissive parents) to see it after much negotiating.  To say it met all expectations was an understatement and over the last two decades I’ve been an ardent support of its merits.  Sure, it’s camp and trashy but it’s essential viewing at the same time – and aside from a gruesome scene of sexual violence near the end, a fairly entertaining watch, too.  Thrashed by critics and bombing out at the box office, Showgirls seemed destined to go down as another turkey, a trivia factoid game shows would use as a 400-dollar question.  Yet its home video release caught fire and once its creators began to embrace its ridiculousness, the studio leaned into the growing popularity and the movie earned back its budget (and more) after the fact.

In the new documentary You Don’t Nomi, director Jeffrey McHale cleverly examines Showgirls, using fans, critics, archival interviews with the stars, and the career of its director Paul Verhoeven to show how the film has rose from the ashes.  Evolving from a disaster no one wanted to talk about to a calling card of pride, you can’t change the cold fact the film is problematic from the jump and struggles with its own identity throughout but in hindsight…was it really THAT bad?  Aside from just talking about it’s place in halls of camp cinema (which the soon to be released Time Warp: The Greatest Cult Films of All-Time: Volume 3 Comedy and Camp does quite nicely) this is a slightly more serious take on a film you can hardly ever take seriously.

It would be easy just to chart the creation of Showgirls from the beginning, when top Hollywood screenwriter Joe Eszterhas decided to put his own spin on the big MGM musicals that had gone out of fashion.  However, anyone watching this documentary likely is coming to it with some working knowledge of the film and doesn’t need this refresher course in specific detail.  Instead, McHale weaves in this origin story alongside Verhoeven’s ascent from Oscar-nominated filmmaking in the Netherlands to infamous director of provocative properties in tinsel town.  This helps form a picture of Verhoeven’s more European approach to sex and violence in his films and how it influenced numerous aspects of Showgirls.

The production of the film is covered as are the critical reactions and original box office run that left star Elizabeth Berkley as the unfortunate scapegoat.  Where the doc gets really interesting is anytime it’s exploring the after effects of Showgirls and how it has had an impact, positive and negative, on people’s lives.  There’s Berkley, whose movie career was ended before it ever began, given a small but overdue reprieve at a 20th anniversary celebration of the film.  In the same segment, we meet the performer that spearheaded the Showgirls musical, a popular stage show who entered into the production as a way to reclaim power after a personal setback.  These moments (a deep dive cinematographic breakdown of a scene between Berkley and Gina Gershon is revelatory and fun) and more aren’t just straws grasped at to illustrate why the movie is relevant…they’re engaging examples of how the film has come to justly earn its cult status.

For a movie that’s chock full of sex and nudity, Showgirls is widely regarded as one of the least sexy movies ever and it’s hard to argue with that.  Still, in the same breath you also can’t say it’s not well made or incorrectly put together.  In a most respectful way, You Don’t Nomi invites us to take another look at the film and see it for more than just its sordid history, restricted rating, and critical consensus.