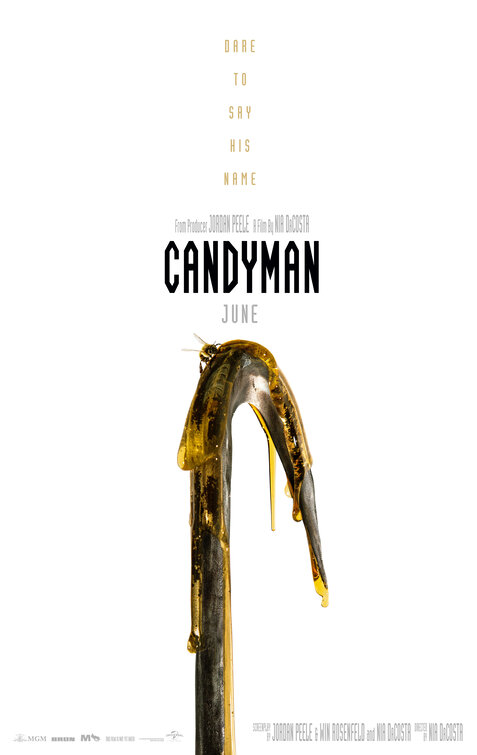 Synopsis: Candyman, a murderous soul with a hook for a hand, is accidentally summoned to reality by a skeptic grad student researching the monster’s myth.

Thoughts: As I recalled in my 31 Days to Scare review, 1992’s Candyman remains one of the rare movies that still manages to frighten me to this day.  It scared me terribly when I first saw it and I get a little rush of sweat in my brow when I know I’m going to be seeing it again.  It’s just that well-crafted of a horror film.  So I was more than a little curious when a remake was announced, thinking it was just another in the long-line of ill-conceived reboots that no one asked for.  It’s when Oscar-winning screenwriter and surging director Jordan Peele (Us) came on board to co-write the script and director Nia DaCosta signed on to direct that I really got interested and if this first trailer is any indication, this 2020 Candyman is going to pack that same scary sting as the original.  With an enviable cast including Yahya Abdul-Mateen II (Aquaman), Teyonah Parris (Chi-Raq), Colman Domingo (If Beale Street Could Talk) and even original cast member Vanessa Williams (no, not that one) returning as what looks to be the same character this one is something to look forward to.  Looking over the cast on IMDb reveals Peele is either making a sequel ala the recent Halloween or remaking the original with a twist…either way I’m in for some sweet screams. 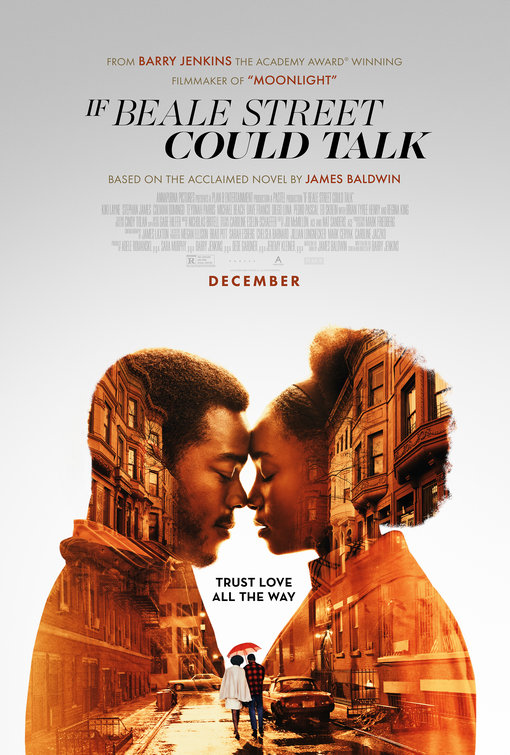 Synopsis: A woman in Harlem desperately scrambles to prove her fiancé innocent of a crime while carrying their first child.

Review:  In 2016, writer/director Barry Jenkins won an Oscar for his adaptation of Tarell Alvin McCraney’s story Moonlight, telling a unique story about a heretofore underrepresented population of the black community onscreen.  It was a bold, beautiful movie that challenged viewers and our own prejudices not only to skin color but to our perceptions of love and acceptance.  While Jenkins missed out on winning Best Director, Moonlight famously went on to win Best Picture is an Oscar snafu that first saw La La Land announced as the victor only to have Academy officials quickly rush the stage to say presenters Faye Dunaway and Warren Beatty read the wrong winner and the small indie Moonlight actually took the prize.

Two years later, we were all waiting with baited breath wondering would the next Jenkins film, If Beale Street Could Talk, capitalize on his momentum and solidify that Moonlight wasn’t just a flash in the pan moment of greatness.  Based on James Baldwin’s 1974 novel of the same name, Jenkins has again adapted a work of great beauty that juggles multiple timelines and emotions and creates an utterly transporting experience.  While it couldn’t be more different from Moonlight in subject matter, it captures a similar spirit and builds on that earlier work, bringing audiences deep into the lives of two young lovers and their families dealing with a terrible situation.

Tish (KiKi Layne, Captive State) and Fonny (Stephan James, Selma) have grown up together in Harlem, their childhood friendship blossoming into teenage affection and then into adult love.  When the film opens, Fonny is in prison awaiting trial for a raping a woman and Tish has to tell him that she’s going to have his baby.  Through flashbacks intercut with present day scenes of Tish and her family seeking assistance in clearing Fonny’s name, we see how these two young people got to this place and time and mourn the likely loss of the shared life they’ll never get to begin.  Is the woman accusing Fonny doing so because he’s black?  Or was she instructed to pick him out of a line-up by a cop (Ed Skrein, Deadpool) that had a previous run-in with him?  What about the darkest question of all?  Could Fonny have actually done it?

Even though this is only the second film I’ve seen from Jenkins, I can already see a calling card style to his work. Like director Jonathan Demme (The Silence of the Lambs), Jenkins favors having his actors staring directly into the camera, which functions as a way of drawing audiences into the action and makes you feel like they are delivering their lines directly to you.  You suddenly become the character being addressed and the effect is unsettling, yet thrilling all the same.  Much of If Beale Street Could Talk are just conversations between ordinary people and the film isn’t afraid to keep things quiet and reflective, like in a scene with Brian Tyree Henry (Spider-Man: Into the Spider-Verse) recounting to his old friend Fonny what a black man’s psyche feels like after being in prison.

At the center of the film are the two impressive performances of Layne and James, navigating countless emotions throughout from the nervous excitement of a first coupling to elation in the face of fear at the news of their upcoming child to the desperation and eventual resolute acceptance of a broken legal system.  The work here, especially Layne as the film progresses, is outstanding.  The young actors are strongly supported by Regina King (Jerry Maguire) as Tish’s mother who is mighty and moving in several key scenes without ever resorting to the kind of showboating acting the role could have leaned toward.  For me, it’s not quite the Oscar-winning performance people are claiming it is but King is always such a solid presence I get why she’s at the top of the conversations this year.  I also enjoyed Teyonah Parris (Chi-Raq) as Tish’s no-nonsense sister, and Michael Beach (Aquaman) and Aunjanue Ellis (Get on Up) as Fonny’s parents who come calling for but one scene early on in the film and leave a sizable impression in their wake.  Familiar faces Diego Luna (Contraband), Dave Franco (The Disaster Artist), and Finn Wittrock (Unbroken) show up in smaller supporting roles that thankfully don’t get in the way of our leads.

Nicholas Britell’s (The Big Short) brass heavy score is fantastic as is James Laxton’s (Tusk) golden-hued and period specific cinematography, all playing their role in picking you up and placing you exactly where Jenkins wants you to be.  Jenkins has a way with casting even the smallest of roles pitch-perfectly, with no one betraying this is a movie set in 1974 made in 2018.  While Moonlight was more of a film that led to further discussion, If Beale Street Could Talk doesn’t quite have that same “Let’s talk about it” feel to it when the picture ends.  That’s not to say it isn’t highly effective or incredibly moving – it’s a movie made with emotion that you can’t help but be swept away with and that’s largely due to the performances and the way Jenkins brings many elements together to create a true movie-going experience.  One of the best of the year.