Synopsis: A troubled businessman’s life is upturned after the arrival of a mysterious female temp worker in his office.

Review:  Tell me if this sounds familiar to you (and if not, humor me).  You’re at home, eaten a nice meal, and are ready for dessert.  You go to the freezer, get out a batch of ice cream that already has a flavor profile…let’s say, Peanut Butter Cup.  Tonight, though, Peanut Butter Cup alone isn’t good enough.  You go to your cupboard and add some M&M’s, a few mini marshmallows, maybe some actual peanut butter cups to gild the lily, and then top it off with some chocolate syrup and whipped cream.  By the time you’re done, there’s this strange creation in front of you that doesn’t resemble what you started with and when you bite into it…you wish you had just left it alone.

That’s sort of what I feel like when thinking about The Temp, the goofy thriller that came out on my birthday in 1993 and made back just a paltry 1/3 of it’s 15-million-dollar budget.  With a strong director (Tom Holland of Thinner & Child’s Play), two Oscar winning actors (Timothy Hutton and Faye Dunaway) and a number of rising stars in its cast, not to mention it’s perfect for the early ‘90s pseudo-suspense set-up, The Temp should have been an easy score for Paramount Pictures.  However, if you read up on the film and even just watching it through, you can tell that it’s been royally messed with on its way to release and either maneuvered into the half-hearted attempt it is, or torpedoed from something more sinister which it feels like it wanted to be.

Of all the offices to stage a murder mystery, a cookie company in Oregon would be the last thing I would think of but that’s exactly where screenwriters Kevin Falls and Tom Engleman post Peter Derns (Hutton, Ordinary People) as a divorced dad with anger management issues recently returned to work after suffering a bit of a breakdown. With his company about to be taken over by a larger corporation looking to trim the executive roster as a cost-saving measure, his paranoid nature is back on high alert almost instantly. To make matters even worse, his personal assistant (Scott Coffey, It Takes Three) just left for paternity leave, and he’s left scrambling to please his own boss (Faye Dunaway, Eyes of Laura Mars, wild-eyed and sweat-lipped from the downbeat) with little notice.

He’s not on his own for long, because he’s soon assigned a temporary assistant, the well-educated Kris (Lara Flynn Boyle, Poltergeist III) who time and time again proves to be Peter’s saving grace.  There’s clearly some kind of electric connection between the two and whatever flirting goes on between them remains on the up and up. This is especially good considering that when his full-time assistant returns Kris has endeared herself enough to stick around and begins to rise up the ranks of the company rather quickly.  So quickly, in fact, that it comes on the heels of a suspicious number of accidents, deaths, and exposed secrets about executives, suggesting that someone on the inside might be making it easy for Kris to have a path forward.  Is it Kris herself or someone else with a vested interest in seeing the others around her fail?

In our current era of #MeToo and understanding more about gender politics in the office workplace, The Temp actually becomes an interesting watch through a more experienced lens.  I’m sure the movie couldn’t have been written exactly as-is now…but could it remain just slightly altered and be more effective?  Possibly.  It’s a shame that it seemed to go through so many test screenings and alterations in post-production.  The well-known tale is the entire final act was reshot, much to the anger of Dunaway who refused to film certain scenes and to the overall confusion of audiences.  What’s there now seems incongruous with the rest of the movie, turning into a half-baked Hitchcock film when it never expressed any interest in being up until that point.

What it had shown some curiously in exploring were a few nasty deaths and Holland’s expertise in building tension as we waited for some bad things to happen to the employees and friends of Peter. (Look for Single White Female’s Steven Weber, Oliver Platt from Flatliners, and Beautiful Boy’s Maura Tierney in the cast as well.)  One such incident is bloody memorable even today (two words: Paper Shredder) and if The Temp had been more adventurous in exploring those kinds of shocking moments, perhaps it would have been promoted more in theaters from a box office dud to minor success.  It also might have helped Boyle break out more as a film star because while she had notoriety on TV and minor roles in films, leading lady status sadly evaded her.  Hutton and especially Dunaway look embarrassed to be in this by the end, but Boyle stands by the movie throughout, which in a strange way works for her character as well. 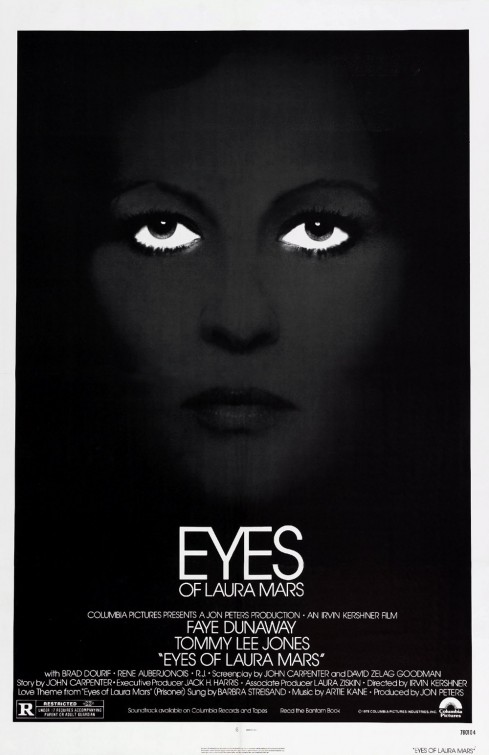 Synopsis: A famous fashion photographer develops a disturbing ability to see through the eyes of a killer.

Where to Watch: DVD

Review: Deep down inside, somewhere where most of my guilty pleasure movies are filed away, I know that Eyes of Laura Mars isn’t good. It’s a hollow thriller that misses the mark on many levels and doesn’t achieve what it sets out to do. Moreover, it has one of the dumbest endings of all times…so bad that I wonder if it wouldn’t have been better if projectionists had just turned off the movie and sent everyone home five minutes before the film concludes. At least you’d leave with a bit of a zing and without your eyes tired from rolling in exasperation.

Yes, Eyes of Laura Mars is a kitschy late ‘70s thriller attempting to have some class. Yet here it is, featured early on in 31 Days to Scare. Why? It’s just so…entertaining. Whether you’re actively engaged in it or far removed, it’s never dull and not the museum piece it could have become. And it has Faye Dunaway (fresh off her Oscar win for Network) turning up her crazy knob long before her famously camp performance in Mommie Dearest.

Laura Mars is a famous fashion photographer known for glamorizing violence to sell product. Her images have galvanized the population and have attracted the ire of one demented psycho. Conveniently, when the killings begin Laura discovers a psychic link between herself and the murder, allowing her to see what the killer sees. When her closest friends and colleagues start getting their eyes plucked out and with a brutal manic gaining on her, she teams up with a cop (Tommy Lee Jones, Hope Springs) to unmask the fiend.

Originally intended as a vehicle for Barbra Streisand (her then-boyfriend produced the film and Streisand contributes an impressive song for the opening and closing credits), Dunaway is actually quite good here even when she’s ferociously overacting. Known for her frustrating method ways, if Dunaway knew the film was shaky she doesn’t show it but instead sinks her fangs in even further. Jones is surprisingly upbeat and even blasts out a few smiles. Brad Dourif (Color of Night), Rene Auberjonois, & Raul Julia (credited as R.J.!) are the various men in Laura’s life who wear their red herring T-shirts with gusto.

Rumor has it George Lucas was so impressed with a rough cut of this film he hired director Irvin Kershner to direct The Empire Strikes Back. Kershner and cinematographer Victor Kemper (National Lampoon’s Vacation) do give the film an elegant, classy sheen but there are enough close-ups of Dunaway’s eyes bugged out and wild to be featured in some sort of mascara ad. Though many of the costumes by Theoni V. Aldredge are stuck in the ‘70s, Dunaway is beautifully decked out in tartan plaids and regal attire but pity the models stuck in dreadful fad clothing, forever on celluloid wearing fancy togas.

Even though there are some interesting sequences, like Dunaway being chased through an abandoned building while seeing through the killer’s eyes as they gain on her, there’s a restraint that starts to sink the film. Low on blood and feeling watered down from a more violent version, someone (the studio, the director, etc) decided to play it safe instead of going for the jugular. The script (from a 10-page treatment by genre legend John Carpenter, Halloween) feels like a dozen people wrote it. There’s zero interest in finding why Laura and the killer have a connection and no real detective work in trying to figure out whodunnit until the third act when half the cast has been sliced and diced.

Watching it again recently (as I do every few years), I was surprised I only just realized the movie is an attempt to Americanize the Italian Giallo film. With its heightened sense of reality, its focus on celebrity and excess, and its embracing of glam-violence Eyes of Laura Mars is a noble but ultimately hopeless attempt to capitalize on the popular films successfully imported from Italy. Had someone like horror maestro Dario Argento or Lucio Fulci taken a crack at this, it may have wound up being a film with more lasting impact and imagery.

And they would have fixed the ending.