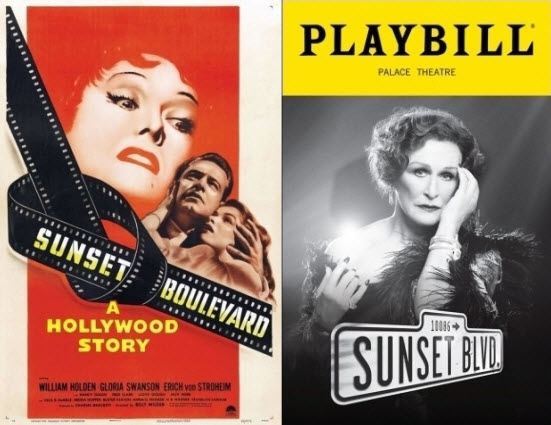 Your old pal The MN Movie Man took some time away from dark movie theaters in May for a long overdue visit to The Big Apple and caught up with what Broadway has to offer. Theaters in NYC and London’s West End are continually being filled with stage adaptations of movie properties and out of the 10 shows I saw, half of them either began as a film or are revivals of shows that generated a movie version of their own. In this short series, I’ll go through these five musicals from the Great White Way and see how they compare to their Silver Screen counterparts.

You don’t get more Hollywood than Billy Wilder’s Sunset Boulevard. Released in 1950, the movie was a scathing bite at the Tinsel Town hand that fed the majority of the people involved. Nowadays there’s nothing Hollywood loves more than patting itself on the back and showering movies about the film industry with plaudits (hello, La La Land!) but back when Sunset Boulevard arrived not many industry people were immediately lining up to sing its praises as an insider’s look into the studio system. Nominated for 11 Oscars including Best Picture, Director, Actor, Actress, Supporting Actor, and Supporting Actress, the movie was up against some stiff competition (All About Eve, Born Yesterday, Father of the Bride) and wound up winning just three: Art Direction, Screenplay, and Franz Waxman justly took home gold for his haunting score.

Even if over the years Gloria Swanson’s unhinged fading silent film star would be fodder for parody from the likes of Carol Burnett, the picture remains oddly timely and still a strikingly beautiful film. Filled with unforgettable moments such as Swanson’s creepy crawl toward the screen as it fades to black, it’s an unqualified classic that earns its place as one of Hollywood’s crown jewels of filmmaking. It’s also a pleasure to see legends such as Cecil B. DeMille, Hedda Hopper, and Buster Keaton play themselves, further blurring the line between reality and fiction.

I was barely a teenager in 1993 when Andrew Lloyd Webber’s musical adaptation of Sunset Boulevard premiered in London. I’m not even going to go into its troubled path behind the scenes involving lawsuits from two divas (Patti LuPone & Faye Dunaway) who were both hired and fired before the show even premiered stateside. When the musical arrived in NYC in 1994 it easily won a host of Tony Awards including, among others, Best Musical, Best Actress for Glenn Close, and another for its gargantuan set designed by John Napier. The sheer size of the production was legendary but made it difficult to recoup its investment so it didn’t wind up being the true smash it could have been. Even a touring production folded quickly due to the constraints of such a behemoth making the move from theater to theater on a weekly basis. Subsequent productions scaled back the proceedings (one even had its actors playing their own instruments…shudder!) but it wasn’t until 2016 when a semi-stage run in London with Close reprising her role that there was talk Broadway might get another trip down Sunset Boulevard.

I’ll admit the chief reason I planned my trip to NYC was for the chance to see Close in the role she will forever be identified with (at least onstage). Seeing Close, um, up close was too good of an opportunity to pass up and add to that a 40 piece orchestra in Broadway’s famed Palace Theatre and the writing was on the wall…I had to see it.

There’s no way to accurately describe the experience of seeing Sunset Boulevard the way I think it was meant to be seen, with its original leading lady and a grand orchestra in a scaled back production smartly restaged by director Lonny Price that may have been smaller set-wise but felt grandly operatic all the same. Removing the lavish set dressings allowed the music (some of it borrowed from Waxman’s original score) and the performances to be the justified stars of the show.

Handsome Brit Michael Xavier sports a spot-on American accent and handily takes on doomed screenwriter Joe Gillis while Swede Fred Johanson is imposing but loyal as Max, Norma’s chauffer – both men sing wonderfully. Price has assembled a well-oiled ensemble including one that plays a ghostly visage of a young Norma Desmond that haunts her elder self throughout the evening.

The show is all about Close, though, and she’s unforgettable. She already made for a thrilling Norma in 1994 (at least on CD) but seeing her take on the same role over 20 years later was revelatory. The voice isn’t always rock solid but these moments of grated fragility only add to the overall sadness of the character. From her first entrance to the goosebump-inducing finale, it’s impossible to look at anyone but Close because she’s always completely ‘in’ the scene even during the very few times where she’s not the focus.

Gloria Swanson and Glenn Close will both be remembered for their interpretations of Norma Desmond, and while Close’s original reading was just adjacent to Swanson’s screen performance in this revival she goes deeper and recreates the role from the ground up. It was everything I wanted and more – well worth the trip!