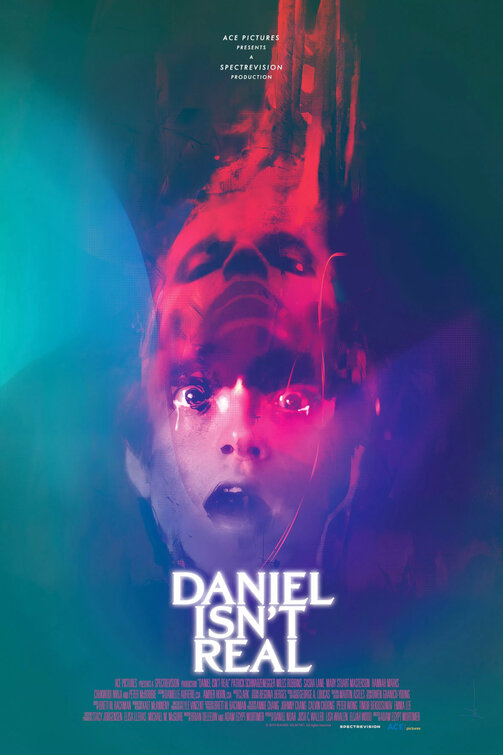 Review: There were times when I envied people who talked about their imaginary friend when they were growing up.  Having that special person they could converse with and share secrets sounded kind of fun…a little wacky, but fun.  I wanted to know what these “friends” looked like, were they human, did they age along with you, did they go everywhere with you?  What about when you wanted a moment to yourself?  As an only child, I wondered why I didn’t automatically get one of these because I didn’t have the built-in playmate that a sibling often brings but, sadly, I was left to my own creative ways to pass the time.  Probably for the best…I got into enough trouble on my own.  Mom and Dad, sorry again for all of my shenanigans.

In movies, imaginary friends have been featured in romps like 1996’s trite Bogus and, most famously, in 1991’s Drop Dead Fred which was filmed in my hometown (Minneapolis, MN) and showcased one of the last onscreen appearances of everyone’s dreamgirl of the ‘80s, Phoebe Cates.  Drop Dead Fred was a mischievous imp that got our leading lady into all sorts of trouble but ultimately had her best interest at heart.  He may have royally wrecked her life at the outset but it was all for the best.  In the new psychological thriller Daniel Isn’t Real, a make-believe mate wreaks similar havoc that turns far more sinister the more his true motives are revealed.

Based on a 2009 novel by Brian DeLeeuw, the film has an audacious opening that introduces us to young Luke, showing how he comes to meet up with Daniel at the scene of a violent crime.  (It’s a bit of a shock, especially considering some of the recent headline-making incidents, but it’s a highly effective way to kickstart the movie).  Becoming fast friends in spite of their unique circumstance of meeting, Daniel provides an outlet for Luke to escape the troubles at home where his mother (Mary Stuart Masterson, Fried Green Tomatoes) battles a growing mental illness.  After nearly killing his mother under Daniel’s seemingly benign influence, Luke is finally convinced to lock his friend away in a stately dollhouse where he remains trapped for the next decade.

Now a college freshman struggling with his own issues, Luke (Miles Robbins, Halloween, son of Tim Robbins and Susan Sarandon) returns to his family home for a visit to find his mother in a downward spiral of schizophrenia.  Under pressure with school, his family, and life in general he turns back to the one time in his life when he felt special, with Daniel.  Unlocking the dollhouse releases Daniel (Patrick Schwarzenegger, Scouts Guide to the Zombie Apocalypse), who has aged into a brooding trickster more than willing to help his old friend sort out some of his current problems.  With Daniel’s assistance, Luke aces a quiz he was unprepared for, gets the confidence to talk to a girl he’s been eyeing (Hannah Marks) and even meets another girl (Sasha Lane, Hellboy) that might provide the kind of challenging love and support Daniel could never offer.  This, obviously, won’t do.  The longer Daniel is in Luke’s life the less it feels like he’s his friend and more like he’s haunting him.  As Luke eventually realizes what Daniel really is and what’s he’s up to, it becomes a fight for survival because how can you run from someone that’s a part of you?

There’s some good stuff going on in this adaptation from DeLeeuw (Paradise Hills) and director Adam Egypt Mortimer, especially in the opening half when Daniel is more of an enigma.  These early scenes when Luke is struggling with the realities of life and discussing his problems with his psychiatrist (Chukwudi Iwuji) have a nice snap to them.  Even the introduction of the adult Daniel has its interesting moments, with Schwarzenegger’s acting being just on the right side of hokey to pull off the vapid poser this creation is presenting himself to be.  I also liked any excuse to see Masterson onscreen, she was such a popular presence in the ‘80s that it’s nice to see her transition into the mom phase of her career with this complex type of motherly character.

What doesn’t seem to work for me is a dreary final forty minutes, mostly because it rests on the shoulder of Robbins and Schwarzenegger and, sorry to say it, these progeny of Hollywood royalty aren’t exactly captivating thespians.  Robbins is so non-threatening that he’d be a great person to bring home as a prom date but doesn’t convince when he’s asked to preen and sneer when he’s possessed by Daniel’s persona at one point near the finale.  Same goes for Schwarzenegger who, aside from those out of the gate scenes that work, becomes one-note (a low one) fairly fast.   Together, they’re a fairly dullsome twosome and as their escapades turn more violent, the less interesting the movie becomes because DeLeeuw and Mortimer have telegraphed from the start just how far Daniel is willing to take things.

Still, there’s something to Daniel Isn’t Real that kept it on my mind long after it was over.  This feeling of not being able to get away from a destructive inner demon that nags at you is relatable and I appreciated when DeLeeuw and Mortimer explored those internal struggles.  I mean, it’s sometimes a bit literal but there are moments when the suggestion is more effective than the presentation and that’s what sets this one apart.  There are some elements of The Cell that enter the picture near the end, visuals included, and while the budget can’t quite support those aspirations I appreciated the attempt at keeping our eyes fixed onto something unique.  I wonder what this would have been like with stronger leads, though.  If we don’t care about the character going through this turmoil, what’s the point?