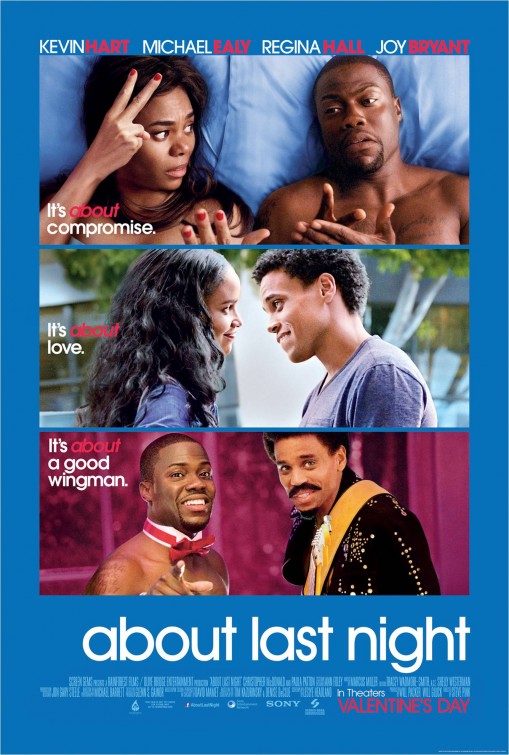 Synopsis: New love for two couples as they journey from the bar to the bedroom and are eventually put to the test in the real world.

Thoughts: David Mamet’s 1974 play Sexual Perversity in Chicago was already made into a film and modernized for an 80’s audience as About Last Night…, the mostly decent 1986 film that helped further establish the careers of Rob Lowe and Demi Moore.  For Valentine’s Day 2014, Mamet’s tale of the complications of love, friends, and relationships is getting another update, this time with a black cast. With a script from Leslye Headland (Bachelorette) and featuring the likes of Kevin Hart (Ride Along) this could be to the original what The Wiz was to The Wizard of Oz: a film that took the framework of an established product and added its own distinct touches.  I’ll be most interested to see how Headland’s dialogue retools Mamet’s razor sharp observant prose.

Synopsis: Former getaway driver Charlie Bronson jeopardizes his Witness Protection Plan identity in order to help his girlfriend get to Los Angeles. The feds and Charlie’s former gang chase them on the road.

Review: As a reviewer, it’s important to be able to admit when you go into a movie with a bias against it.  I’ll be honest and reveal that Hit and Run wasn’t high on my list for several reasons, the biggest being that I’m not the hugest fan of its stars.  Also, a jokey and fratboy-esque trailer seemed to say that the movie was strictly for fans of Shepard’s brand of comedy.  So you can see why I wasn’t counting down the days until I had to take in Hit and Run.

Well, a little humble pie is good in any diet so the piece I’m eating right now tastes just fine.  Instead of a silly movie you’ll be regretting plunking down your change for, what you can expect to see if you go is a throwback film that’s high on laughs, great chase sequences, and a finely tuned assembly of actors that relish the broadly drawn characters they are playing with.

Shepard’s influence is all over this film.  He wrote it, co-directed it, stars in it, provided his own cars for it, and does his own stunts.  Being that involved in a film can sometimes be the kiss of death because you can’t see the forest for the trees.  Luckily, Shepard has his head screwed on right and clearly has a game plan for the proceedings.  He’s evolved into a laid-back actor that knows how to mine laughs out of the audience without going back to the same well repeatedly.

A real-life couple, Shepard and Bell work wondrously together.  It’s clear that Shepard tailored the script to Bell’s talents which heretofore haven’t been seen on screen.  While not a natural comedienne, Bell gamely dives into Shepard’s world with a trust and verve that’s fun to watch – their chemistry translates easily to the screen but at times you forget they are in character and not just playing out a big screen version of their own romance.  Still, several of their back and forth dialogue scenes are lightening fast and freshly funny that only two people with an established rapport could pull off.

The supporting players (all rumored to have worked on the film for free as a favor to Shepard) are a mixed bag of laughs with Cooper scoring as a bad guy bank robber that is hunting for Shepard as a witness protection-ed former getaway driver named Charlie Bronson (he picked it himself).  When Charlie decides to leave the witness protection program to drive his girlfriend Annie to a job interview in California, old enemies and one determined ex-boyfriend are on their trail.  Several well-designed and expertly scored car chase sequences are fun interludes to the quick fire comedy of the dialogue scenes.

Really, Hit and Run plays more like an updated version of Smokey and the Bandit and CannonBall Run.  That same easy-going nature that made those chase films such a hit works in favor of Hit and Run as Shepard has laid the groundwork for characters you can relate to and are invested in.  If Charlie or Annie were as insanely annoying as they could have been, no one in the audience would care how they get to their final destination.

An overabundance of crude material is the only thing that detracts from the bright comedy and fast-paced action.  I’m no prude when it comes to foul language but even I had to admit that an overuse of the F-Bomb started to grate on my ears after awhile.  There’s also two shocking bits of nudity that, while funny, seemed a little too crude for school the more you think about them.  Crude tut-tuts aside, Cooper does get to deliver one of the funnier ‘out of nowhere’ lines you’ll hear in 2012 as he tells Charlie the real reason he’s mad at him.

A surprisingly enjoyable film, Hit and Run could be a sleeper hit if the time is right.  As we are in the dog days of summer, audiences could be in the mood to spend some quality time with Shepard and the gang.  Those on the fence: Make sure to slice yourself off a piece of humble pie for when you get home.