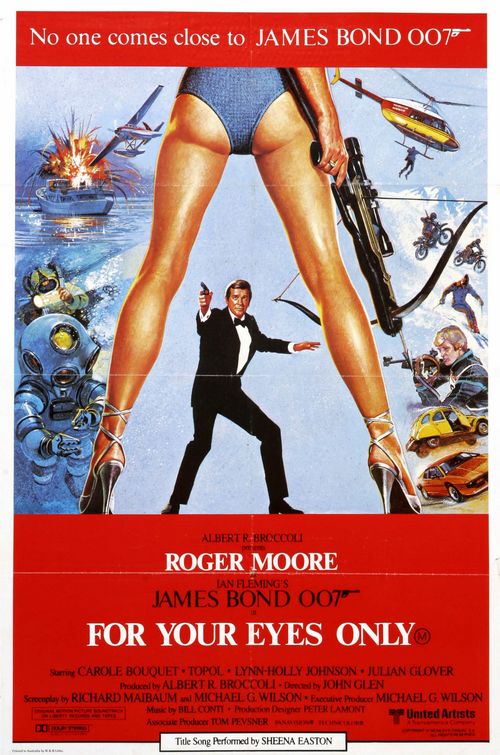 Synopsis: Agent 007 is assigned to hunt for a lost British encryption device and prevent it from falling into enemy hands.

Review:  Originally intended as the follow-up to The Spy Who Loved Me, For Your Eyes Only ended up being moved in favor of Moonraker in order for the producers to keep Bond in the mainstream and going along with the times.  Well, well all know how that turned out.  Though Moonraker became the most successful Bond film at the box office until GoldenEye was released, it was a critical dud and considered a low point for the franchise by most Bond fans.

I’d like to offer up For Your Eyes Only as the true low point of the series and absolutely the worst of Moore’s outings as Bond.  Yes, even A View to a Kill is better than this boring 12th Bond film in my book.  It’s a film filled with bad performances and one of the most boring plots ever to be deemed worthy of a Bond adventure.

Longtime editor Glen moved into the directing chair for this film and would remain with the franchise for the next five films.  His first film is lackluster to say the least with nearly nothing directorially to write home about.  Even an impressive underwater sequence can’t be credited to him as the opening credits show us the names of the numerous second unit and underwater directors that contributed to the picture.

Moore is really on autopilot here, hardly invested in anything that’s happening from the eye rolling opening that features the final dispatch of a longtime Bond nemesis to the couplings he shares with vacant Bouquet and listless Cassandra Harris (who would end up married to future Bond Pierce Brosnan).  Moore looks weary and too old for the role…so when you watch the film knowing he has two more Bond adventures to come you kinda can’t believe it.

In a plot that would put a rabbit on speed to sleep, Bond partners with an exotic beauty (Bouquet) to track down a machine that can control nuclear submarines.  He’s in it to save the world, she’s in it to avenge the death of her parents.  For a time, the movie wants us to think the main villain is the man who would be Tevye, Topol, until it switches course and tries to backtrack on itself.

There’s also a bimbo figure skater (Johnson who I’m guessing was cast simply based on her skating in Ice Castles) who is there to provide Bond with a reason to ski down a big hill for one of the more impressive action sequences that the film has to offer.  That sequence, paired with the aforementioned underwater chase are scenes to look forward to in an otherwise stone cold entry in the series.

Sheena Easton sings the agreeable title tune and actually shows up in the credit sequence…something that gives the film more of a music video feel than the classic Bond opening credits I have come to eagerly anticipate.

A paint-by-the-numbers affair that runs of our material before it’s half over, For Your Eyes Only is recommended only to see how low 007 could go before starting the next wave of bumpy highs and lows.