Synopsis: A delicious mysterious goo that oozes from the Earth is marketed as the newest dessert sensation. But the sugary treat rots more than teeth when zombie-like snackers begin infesting the world.

Review: When schlock director Larry Cohen passed away in March of 2019, he left behind a legacy of campy horror films that ran the gamut in tone and style.  He was comfortable with tightly paced Hollywood fare like Cellular and Phone Booth, likely because he was used to filming quick and fast having cut his teeth in low-budget horror films It’s Alive and God Told Me To.  Though his movies were amusing in a throwback sort of way (I dare you not to watch the ‘80s monster movie Q: The Winged Serpent and not have just a little bit of fun) they often were one joke/concepts that didn’t always have a resolution to their rather fantastical set-ups.  Good starts, bad endings.

Never is that more apparent than in The Stuff, Cohen’s 1985 sci-fi horror satire about a tasty substance that becomes everyone’s favorite snack.  Obviously commenting on the yogurt craze that was happening around that period of time, Cohen spends the first half hour or so of the film nicely structuring a framework of a society eager to jump on the bandwagon of the latest craze.  Marketed as The Stuff, every supermarket has a healthy stock and nearly all American households have one or more cartons in their refrigerators waiting to be consumed.  The advertising parodies Cohen has dreamed up are a riot, with commercials and jingles for The Stuff providing some decent laughs in their ridiculous earnestness.

There’s something bad about The Stuff, though, and we know it early on.  Suburban boy Jason (Scott Bloom) wakes in the middle of the night looking for a midnight treat and when he opens the fridge he sees The Stuff moving…crawling back into its carton.  His parents and brother don’t believe him, likely because they have been eating The Stuff on the regular and soon are trying to get him to eat it as well.  At the same time, a private investigator (Michael Moriarty) is hired by a rival corporation interested in stealing The Stuff’s formula and he begins to suspect the food may not exactly have the full support of the FDA.  Teaming up with an ad exec (Andrea Marcovicci) who had been working on The Stuff’s campaign, the investigator uncovers more than he bargained for and is soon on the run with Jason joining their ranks.  Can they stop the spread of The Stuff?

Cohen wastes no time diving headfirst into the action.  Literally, within the first moments of the film we see the goo bubbling out of the ground where an old man finds it, samples it, and thinks it could be something the entire world would want.  This all in the span of, oh, twenty seconds.  The first half of the movie is so front loaded with information and action that Cohen runs of interesting developments before the film has reached the sixty-minute mark.  That’s when he brings in Paul Sorvino (The Gambler) who has been waiting in the wings and, let me tell you, he is hungry to nosh on some scenery.  Sorvino’s military figure battling The Stuff like he’s going to war with the communists is a tired old cliché and only shows you how little the finale was truly thought out.

The concept of The Stuff is intriguing but Cohen did not fill the rest of the movie with anyone we remotely want to root for.  As Jason, Bloom is a total dud lacking conviction in any of his line readings and Marcovicci might have made for an interesting female lead playing a powerful businesswoman of the ‘80s…if Cohen didn’t have her jump into bed with Moriarty immediately when she thought he was a headhunter for another account she wanted.  As for Moriarty, he’s the lead and is truly, truly, atrocious.  A longtime Cohen favorite, Moriarty is going for some slick kind of character with, I’m guessing from his accent, some kind of bayou roots but winds up giving a bad performance for the history books.  Sporting a hideous toupee and laughing at the material almost as much as the audience is laughing at how bad he is in the movie, Moriarty pretty much ruins the movie.

When The Stuff starts to take on a life of its own, there are some decent special effects but it too often reminded me of The Blob (the original and the fun ‘80s remake), reminding me it had been a while since I’d fired one of those films up.  When you spend more time thinking of when you can start another movie you know the one you’re watching isn’t filling you up.  The Stuff isn’t a feast, just an interesting first taste.

Synopsis: When her great aunt dies, famous horror hostess Elvira heads for the uptight New England town Falwell to claim her inheritance of a haunted house, a witch’s cookbook and a punk rock poodle. But once the stuffy locals get an eyeful of the scream queen’s ample assets, all hell busts out and breaks loose.

Review: Along with the classic horror films and modern shockers, it’s nice to have a few scary-adjacent films in your back pocket on the off chance you find yourself in the company of someone who’d rather not feel the fright.  There are plenty of these types of films, with family fare like Hocus Pocus finding a wider audience outside of the PG crowd throughout the years.  I’d also add Elvira, Mistress of the Dark to the pile of alternative titles that can be a fun substitute when gore just won’t do.

Originally introduced in 1981 as a midnight movie hostess on a local cable access station, Elvira (Cassandra Peterson) soon gained wider popularity thanks to her revealing attire and tongue in cheek snarky comments about the low-budget horror films she was showcasing.  People started to tune in just to see Elvira and treated the movies like commercial breaks.  With multiple products bearing her likeness and licensing deals for promotions on a global scale, what better way to capitalize on that fame then to have Elvira star in her very own movie, right?  A total no-brainer.  And that’s what you get.

I would be remiss if I didn’t acknowledge that Elvira, Mistress of the Dark is pretty silly and downright stupid at times but watching it again recently I was amazed at how brisk it moved and how much energy Peterson brings to the character.  When Elvira gets sacked from her late night gig and owing money to producers of her upcoming Las Vegas show, her future looks grim.  Then, out of the blue, she’s informed she’s the beneficiary of an inheritance just waiting for her to claim in a conservative New England township.

She’s not in town long before she’s alienated the local goody-goody (Edie McClurg, Frozen), run afoul of a trio of no goodniks (Susan Kellerman, Frank Collison, & Jeff Conaway), and thrown a wrench into the plans of her uncle (William Morgan Sheppard, Star Trek) who has sinister inclinations involving witchcraft.  She also catches the eye of the town hunk (Daniel Greene) and rouses the town’s teenagers from their fun-free, repressed comas.  There’s plenty of boob jokes and bad puns, all delivered by Peterson with zany charm and a totally wacky musical number at the film’s conclusion.

Look, Elvira, Mistress of the Dark is no shining example of cutting-edge writing or overly competent filmmaking but it’s quite funny and self-aware.  Co-written by Peterson, the movie is tailor-made to fit into the Elvira brand and while not a critical or box office hit, it gained enough notoriety through video rentals to keep Elvira alive and kickin’.  Even today, Peterson looks like a million bucks in her Elvira get-up and keeps her fans happy with each appearance.  Though a sequel, Elvira’s Haunted Hills, appeared over a decade later it couldn’t quite match the fun of her original outing which has aged well…much like its star. 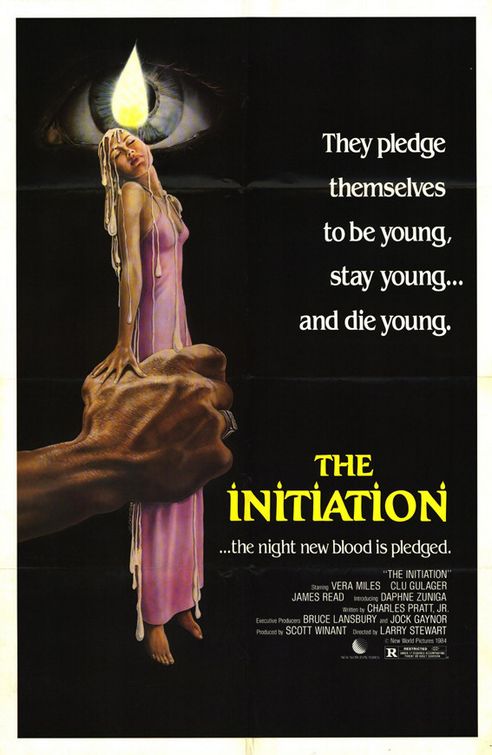 Review:  Released in 1984 at the peak of the teen slasher film craze, The Initiation is one of the better entries in the genre.  Though it could easily be lumped into the same trash heap that so many of these early 80’s college-set slice and dicers fell into, this turned out to be a pleasing and non-fussy diamond in the rough.

Even though you may roll your eyes at the set-up (co-eds stalked by a crazed killer) don’t judge this film by its description alone.  If you do, you’d be passing up a flick less concerned with gawking and hacking at the nubile bodies on display and more interested in crafting a thoughtful framework in which to off its young stars.

Daphne Zuniga (Spaceballs) is Kelly, an average teen starting college that winds up pledging a sorority on campus.  Before the crackdown of hazing on college campuses, pledges were required to do all sorts of crazy things and one wonders if all the pain that the pledges are put through in this particular sorority are ultimately worth it because the girls are all so dreadful.  Still, that makes it all the better when they get picked off one by one by an unseen killer.

The film takes its time to set up the characters and a dark family secret being kept from Kelly by her parents played by above the title stars Vera Miles and Clu Gulager.  Though fairly recognizable names at the time, their presence here smacks of easy money but at least they invest their short time in the film with some convition.

The final task that Kelly has to perform to get into the sorority involves her breaking into the shopping mall her father owns.  With the remaining pledges and a couple of expendable frat dudes along for the ride, the last act of the film is set in the mall (with some amazingly nostalgic store titles on display) as the identity and true motives of the killer are revealed.  Though it winds up not making the most logical sense, there was a certain cleverness to it that I had some respect for.

At 96 minutes, the film is probably about 10 minutes longer than it needed to be but, as it is, this is a better than average nearly forgotten entry in the landscape of 80’s teen horror films.  While it may not provide the kind of scares or T&A than other films of that era, it’s no less gruesome in its kills or creativity.  Worth a watch if you’re a fan of these kinds of films.