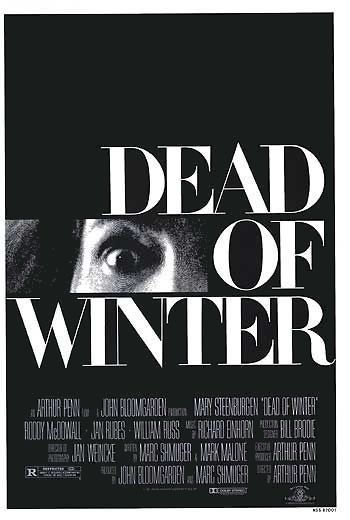 Synopsis: A fledgling actress is lured to a remote mansion for a screen-test, soon discovering she is actually a prisoner in the middle of a blackmail plot.

Review:  Don’t you just love a move title that has a double meaning?  We Minnesotans understand fully what the dead of winter is even though we’ve had it relatively easy this season. The dead of winter referenced in the title of this odd little 80’s film could reference any number of things that befall our heroine.

I think it’s sometimes forgotten that Steenburgen is an Oscar winning actress.  Her Supporting Actress nod for Melvin and Howard seems to go unbilled whenever I read an interview with her or see her name in the credits of a movie.  When this film was released she was flirting with leading lady status but it ultimately wasn’t to be.  While I enjoy the bulk of her work, Steenburgen always seems to be a better fit in a supporting role that a full on lead.  She’s done great work in Philadelphia, Parenthood, and Back to the Future III that confirm she’s got the chops…even if it means she doesn’t have to do the heavy lifting.

Here, however, she gets the heavy-lifting with less than stellar results.  The fault isn’t entirely hers, though; the red herring filled script wants to be so Hitchcock that it ends up playing like a cheap knock off of his work.  I can see where on paper it looked to be a winner with its remote setting, chilly climate, and small cast.  That’s about where the good ideas end in our tale that stretches believability to new heights the more it tries to throw the audience for a loop.  It’s not that we can see where it’s all headed, we just feel we’ve been on this trip before and have visited the gift shop.

Rubes and McDowell give equally weird performances (come to think of it, did McDowell ever not give  a weird performance?) and they at least create characters that you want to see get their comeuppance.  Steenburgen tries to make playing three different characters work but they all end up seeming like the same woman in different clothes.  She’s not helped by a hokey script or the old-fashioned direction of Penn who should have done more with the material.  The final fifteen minutes provide some spark but by then its too little too late.  For a chilly winter tale, skip this one and track down your favorite Hitchcock thriller to warm you up.

Final note…I do love the poster.  You can see where that would hook an audience.  Were the movie as involving…