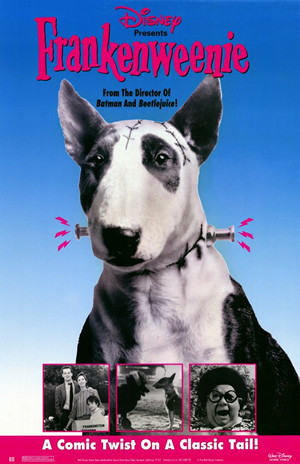 Synopsis: A young boy sets out to revive his dead pet using the monstrous power of science.

Review:  At this point, anyone that has seen even one Tim Burton film can spot the director’s style right away.  With an attention to the off-kilter and comedic darkness, Burton has always excelled at showing us a version of our world that’s a tad bit askew to reality.  In his early career, Burton was an animator at Disney and it was in his tenure there that he came up with this idea of retelling the Frankenstein story but in a supposedly kid-friendly version.  The resulting 29 minute short film wound up being the catalyst for Disney to show Burton the door after test audiences felt it too macabre for its young target audience.

Disney changed their tune once Burton became a hot commodity after achieving success with Pee Wee’s Big Adventure and Beetlejuice.  Though it never received a proper theatrical release, Frankenweenie was released on VHS to capitalize on Burton’s rising star, giving fans a chance to see the very early work from the visionary director.  Now, nearly three decades later Disney and Burton have collaborated on a feature-length version of Frankenweenie which goes to show you that if you wait long enough, audiences will come around.

It had been years since I’d seen the original short film and was surprised to see that I had had it in my possession for some time.  Those that own Burton’s The Nightmare Before Christmas on DVD or Blu-Ray will find the complete film in the special features and it’s worth a watch if you are planning on seeing the 2012 update that arrives on October 5th.

Though obviously filmed a tad on the cheap, the black and white film is distinctively Burton from the opening credits onward.  In fact, the excellent title sequence seems like it’s played out on a set that would later be used for The Nightmare Before Christmas.  Eschewing expensive special effects, the film used practical methods to achieve its magic and it’s a technique that Burton would use to his advantage for many of his films of the late 80’s/early 90’s until he unfortunately became a bit too infatuated with CGI effects.  It’s so clear here the ingenuity in filmmaking that was developing so in addition to being a strong short film it’s pretty much a crystal ball view into the work that was coming for Burton.

Duvall and Stern are wholesome fun as the caring (if oblivious) parents to young Victor Frankenstein (Oliver  who would be best remembered for The Neverending Story) as he revives his deceased dog using principles he learned in school.  As the dog comes to life he causes a bit of a stir amongst the neighbors…but it’s all in good fun.  Watch for Coppola (laughably credited under her then stage name Domino) turn up as a poorly acted neighborhood friend.

Though decidedly dark and probably not for children under 10, Frankenweenie is really for those that are interested in Burton’s early work or for parents that are ready to introduce their children to some more mature subject matter.  Be warned though, they may get ideas on reviving a pet so keep an eye on your backyard gravesites if you have them.