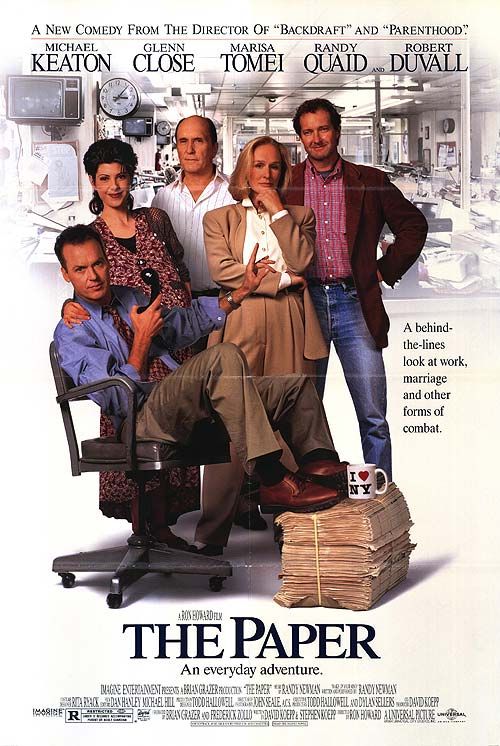 Synopsis: Henry Hackett is the editor of a New York City tabloid. A workaholic who loves his job, the long hours and low pay are leading to discontent until a hot story soon confronts Henry with tough decisions over the course of one 24 hour period.

Review:  In between period pieces Far and Away and Apollo 13, director Ron Howard (Parenthood, Backdraft) delivered this fast-moving and involving comedy-drama that takes place over 24 hours and focuses in on the goings-on at a NYC daily newspaper.   Not a high-class publication like the New York Times but maybe just above the near tabloid nature of the New York Post, the newspaper at the center of The Paper is struggling and its editor (Keaton) is thinking about the future.  With a pregnant wife (Oscar-winner Tomei), a crazed reporter (Quaid who we all know now is crazed in real life), a jaded colleague (Close, Albert Nobbs), and a veteran boss (Duvall, Tender Mercies, Jack Reacher) to juggle on a daily basis he burns the midnight oil thanks to Coke (the drink, not the powder) and gumption.

When a murder takes place and two youths are jailed it seems like any other story…until Keaton’s character begins to do some actual reporting and begins to see that things aren’t as cut and dry as they appear to be.  With a deadline looming and Close’s character breathing down his neck, the film keeps Keaton plowing on without getting much of a breather.

This is a solid film with good, easy performances and a better than average script thanks to David Koepp (Jurassic Park) and his brother Stephen.  Howard does what he does best and lets the movie develop naturally, placing most of the responsibility on his trusted star Keaton who doesn’t disappoint.  Close, too, is very effective as a dragon lady that’s talked about a lot before we finally see her.  When she does appear, Howard presents her in such a way that the first frame tells us everything we heard about her is right on the money.  Duvall and Tomei also turn in fine performances, navigating some cliché material with ease.

Aside from our above the title leads, Howard once again shows strength in casting by filling the newsroom and outside colleagues with strong character actors.  The late great Thigpen has a small role as Keaton’s secretary but makes the most out of her scenes…this is what true renaissance man/woman acting is all about.

Though print news is clearly dying off, The Paper is no period piece when viewed from an online, tech-savvy perspective.  True, some elements are clearly dated but the pursuit of the truth in the face of the grinding engine of economics still has an impact on our society today.  If you’ve never seen this one or haven’t revisited it in a while, check it out again.  It’s no classic but it’s a nice representation of the talent of all involved.