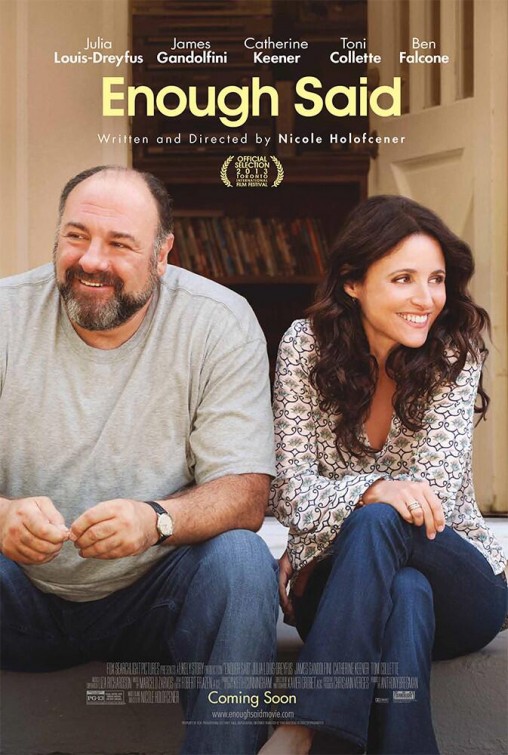 Synopsis: A divorced woman who decides to pursue the man she’s interested in learns he’s her new friend’s ex-husband.

Review: Are you as weary as I am with the slate of romantic comedies that have been released in the last several years?  If so then Enough Said may be the movie that could cure your blues.  A wise film for mature adults made by mature adults, this is a sweetly winning romantic comedy that goes against some of your typical Hollywood norms.  The leads aren’t your traditional bankable hot/buff stars likely to be featured on the cover of US Weekly the same week their film opens in the #1 spot at the box office, nor are they especially bankable…certain death when it comes to major movie studios.

Director Nicole Holofcener knows her way around awkwardly real situations and displays again here what she does best: showing real life people in real life situations reacting believably.  So the result is a film that feels very naturalistic and true to the predicaments we find ourselves in…especially where romance is involved.

I always find it odd that Julia Louis-Drefyus hasn’t become a bigger movie star…then again perhaps her sly talent for wry comedy is perhaps better suited for the small screen where actors can get away with her brand of sharply observed comedic beats.  Movies don’t often give comedic actresses the chance to display the kind of range that Louis-Dreyfus gets to take on here, especially those that are primarily known for their television work.

Even more of a surprise is the late James Gandolfini (Zero Dark Thirty) in his first lead in a romantic film.  Showing teddy bear-ish warmth and sensitivity that’s a far cry from the gruff mob men that made him such an in demand character actor, he fits right into the sweatpants of the character Holofcener has written.  It’s a shame that it took so long for Gandolifni to get a role like this because he’s really quite good, effectively navigating some emotions that until now had gone undocumented on the big or small screens.  The chemistry displayed between Gandolfini and Louis-Dreyfus is strong, and even better its believable unlike so many movies (like the recent Thanks For Sharing) that can’t muster up the same in their interactions between characters.

The supporting cast is also uniformly strong, if a bit tangential to the overall arc of the film.  Catherine Keener (Peace, Love, and Misunderstanding) is her usual acerbic self as a new friend to Louis-Dreyfus and the ex-wife of Gandolfini.  It’s nice to see her playing a woman that comes across as a self-centered bitch but who we gradually come to see is just hopelessly lonely and desperate for attention.  Toni Collette (The Way Way Back, Muriel’s Wedding) and Ben Falcone (What to Expect When You’re Expecting) pop up as friends of Louis-Dreyfus with marital issues of their own.

All the characters are really just swimming around in the same universe as Louis-Dreyfus because it’s really her movie.  What I liked so much about the film and what others may find frustrating is that there’s not a lot of follow through or wrap up when it comes to these secondary characters.  Even the central plot involving Louis-Dreyfus and Gandolfini isn’t fully completed by the final reel…but that’s the beauty of what Holofcener achieves in her films.  She allows us to peek in on the lives of people to see what makes them tick…we don’t’ necessarily need to know where they came from or where they’re going but instead she wants us to focus on the here and now.  As in life, some things come to their own natural conclusions while other events need a little time to sink in before they can find resolution.

With two strong lead performances and a general bucking of the status-quo for these types of films, Enough Said is a nice breath of fresh air…and another winning film from the observant eye/mind of Nicole Holofcener.