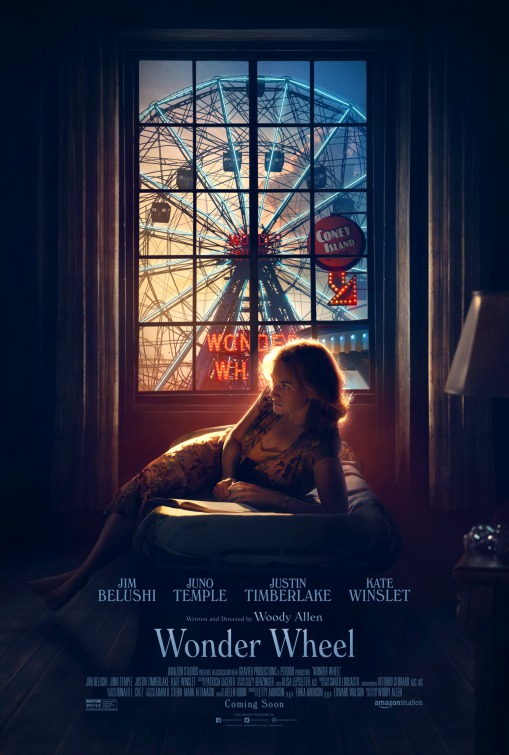 Synopsis: On Coney Island in the 1950s, a lifeguard tells the story of a middle-aged carousel operator and his beleaguered wife.

Review: When I first heard that Woody Allen was setting his new movie (his 48th!) at Coney Island, I was expecting something a bit more…fun.  The first preview set me straight and I’ve spent the last few months waiting for it to arrive and wondering if it was going to be another bump in the downward slant slump or if the director was going to put some cinematic snowshoes on and start to climb back up.  While the shoes are definitely on, Wonder Wheel proves there’s little traction being made by Allen to get back to where he once was.  Perhaps, considering continued allegations against Allen’s personal life, that can never be.

Taking place in the summer months of the waning years of Coney Island’s hey-day, Wonder Wheel opens with an introduction by Mickey (Justin Timberlake, Inside Llewyn Davis), a lifeguard that has a literal birds eye view of the comings and goings of the tourists that visit the beaches and amusement park as well as the people that work there.  One such worker is Ginny (Kate Winslet, The Dressmaker) an unhappy woman approaching 40 raising her son with her second husband, a carousel operator named Humpty (James Belushi, Legends of Oz: Dorothy’s Return).  Humpty’s daughter Carolina (Juno Temple, Maleficent, Cracks) shows up out of the blue looking for a place to hide from her mobster husband that has marked her for death.  Adding another body to an already cramped apartment turns up the heat for the mixed family, bringing out old frustrations.  When Ginny starts up an affair with Mickey who soon becomes enamored with Carolina, the spark is lit for flames on the pyre Allen has built.

Yet…despite some fairly magnetic performances and strong technical merits, the film never manages to catch much heat.  It feels as if Allen (Magic in the Moonlight) had an idea for a beginning but no real inspiration for an ending.  It’s well-known the writer-director has a zillion half-finished scripts he’s hidden away in some old drawer and many of his recent works have been retrieved from the par-baked cave of wonders.  Wonder Wheel has elements to it that make me feel it started in Allen’s mind as a stage-play.  Lengthy scenes in one setting would seem natural for a stage-bound work but on the big screen it feels too claustrophobic and stilted.

While the script may be underdeveloped, the same cannot be said for its production design and cinematography.  Production designer Santo Loquasto (Radio Days) has outdone himself here, beautifully recreating Coney Island in all its swirling technicolor glory.  Rides I’ve long heard about but never seen are digitally recreated in background shots and the central Ferris Wheel from which the movie takes its title is spiffed up…though I was disappointed there are no shots on the actual ride!  Loquasto’s design elements are captured by Vittorio Storaro in a dazzling color palette that gives the film a vibrancy its words sorely lack.  Watching the film on mute wouldn’t be a totally bad way to while away 101 minutes, either.

Another thing that should be mentioned in the music.  Allen’s movies aren’t scored in the traditional sense of the word but instead are comprised of existing songs used in place of instrumental pieces.  That usually works well for me but Wonder Wheel repeats two songs repeatedly to the point that it becomes torturous.  That may be intentional though, as any person that’s worked in a theme park or near one knows the piped in music can cause early-onset madness in even the most milquetoast individual.

It’s a shame the movie isn’t overall a better experience because Winslet’s performance is tremendous.  Ditching her posh accent for the harsh edges of a New York one, Winslet comes alive with a fiery energy that has tinges of Tennessee Williams and Eugene O’Neill. O’Neill is actually referenced several times and Allen clearly is going for another Williams-esque tale, a la, Blue Jasmine.  She has two speeches in the film that are magnificent to watch, especially when you consider they are done in long takes. That doesn’t leave the actress with any room for a false note…and she largely has perfect pitch.

Winslet is surrounded by a crew of supporting players that don’t quite meet her in the middle, though.  Temple fares best as a wounded character that could easily have been sketched with a mean streak but ultimately has a kind heart.  Belushi goes outside of his comedy comfort zone as Winslet’s gruff husband that keeps trying to fall off the wagon before being caught by his beleaguered wife.  The real low point is Timberlake, totally miscast as both the narrator and love interest of the two women.  Timberlake’s line deliveries seem like first tries at the material and Allen does him no favors by not prodding the actor to take more risks.

So in the end, is this nostalgic trip back worth stepping up to the ticket booth for?  Yes and no.  It’s worth a watch for Winslet’s work and the excellent production elements, just don’t be too surprised if you find yourselves divested from interest in the overall plot.