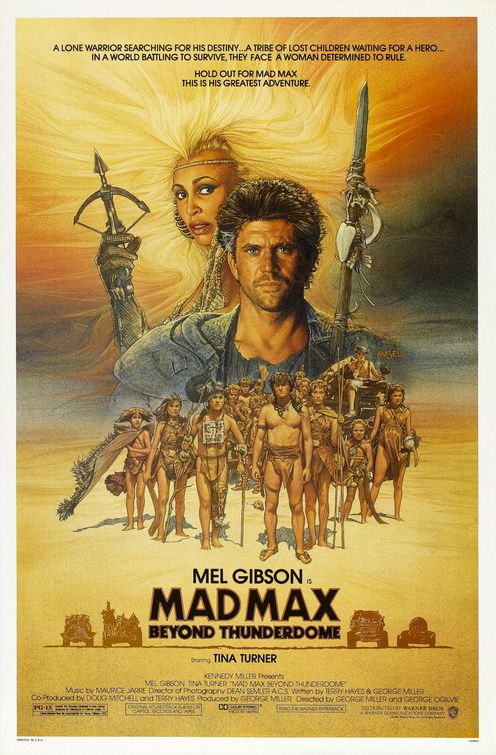 Synopsis: A former Australian policeman is rescued by a tribe of children when he is banished from a desert town and sent into the desert to die by the desert town’s evil queen.

Review: It’s interesting to look back at Mad Max Beyond Thunderdome and realize that it arrived in theaters before Mel Gibson ever took up with Danny Glover in the Lethal Weapon films.  Though the actor had increased his street cred with roles in dramatic films, he wasn’t yet a household name as an action star…but he sure was on his way when the third film in the Mad Max series was released in 1985.

Some have turned up their noses at director George Miller’s second sequel to Mad Max, his landmark film of 1979.  While Mad Max 2: The Road Warrior had done good business in 1981, it had a shiny little R rating to keep the violence high and make it a more enticing option for teens to sneak into.  With the arrival of the PG-13 rating in 1984, studios realized the value in a movie that could be given the stamp of approval as more than a tame family film but less than an adults-only affair.  So Mad Max Beyond Thunderdome was shot with a PG-13 rating in mind…and while certain fans scoffed at Miller going soft with his mythological hero Max Rockatansky, I found this to be the best of the Mad Max films starring Mel Gibson.

Admittedly, the film is probably the most dated of all with its synth score (from Maurice Jarre, taking over for Brian May) and cineplex friendly three act structure.  While Mad Max had the most story to tell, Mad Max 2: The Road Warrior eschewed most plot contrivances and just became a locomotive of action scenes and Mad Max Beyond Thunderdome falls somewhere in the middle.  It’s been said that Miller was less focused on this film after the tragic death of longtime friend and producing partner Byron Kennedy and it shows.  The overall effect of the film feels handled with less care than its predecessors, though it still advances the legend of the cop turned seeker of vengeance.  Miller actually shares directorial responsibilities with George Ogilvie who helmed the action-less scenes, freeing up Miller to add his flair to the over the top chase sequences that had at that point become the calling card for his Mad Max adventures.

The first half of the film is arguably better than the latter, with Max entering into Barter Town and meeting up with Aunt Entity (a marvelously game Tina Turner) who enlists his help in regaining control over rogues that threaten her rule.  When the deal goes south and Max takes a spin inside the death match of the Thunderdome, it sets the stage for an unexpected detour into a tale that involves a lost band of children who see Max as their champion (inspiring Turner’s closing credit jingle We Don’t Need Another Hero, one of two good sound tunes she contributes to the proceedings).

Though the film stumbles a bit on the way to its soft ending, I still found myself engaged more than ever with Gibson (The Expendables 3) and the plot cooked up by Miller.  It may be rather typical fare, especially considering the era, and it’s too long but it’s an enjoyable example of the mid ‘80’s summer blockbuster offerings.  Plus, it has a fabulous poster…the last one created by legendary artist Richard Amsel.