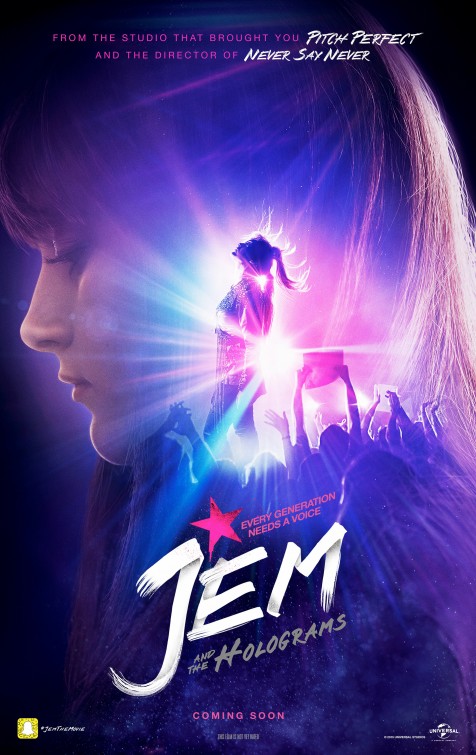 Synopsis: As a small-town girl catapults from underground video sensation to global superstar, she and her three sisters begin a journey of discovering that some talents are too special to keep hidden

Review: Though I found myself sitting through it often, I wouldn’t say that I was a huge fan of the Jem cartoon series that ran from 1985-1988. The animation was rough, the music was a little grating, and the focus on “glamour and glitter, fashion and fame” didn’t really register in my pre-teen consciousness. In the cartoon, Jerrica Benton is the owner of Starlight Music and, with the help of her holographic computer Synergy becomes Jem, a rock star singer taking the world by storm with her band the Holograms. They are often in competition with The Misfits, another all-girl band usually is up to no good and getting in the way of the Holograms success. It was fantasy entertainment to the tune of 80s girl group pop rock and it was nothing if not a pleasant distraction.

Talk of a big-screen Jem has been raging on for years and what was initially planned as an animated feature morphed into the live-action doozy that’s being released 27 years after the series ended. If you aren’t familiar with the cartoon you may be willing to give the filmmakers a pass in what is in the end another in a long line of failed female driven franchises. Banking on the success of Pitch Perfect and its sequel, Universal Studios enlisted director Jon M. Chu and screenwriter Ryan Landels to produce a new take on Jem and it’s a miscalculated failure on nearly every level.

First off, this should never have been a live-action film. The appeal of the cartoon was the colorful world of fantasy and fashion the series nailed in its relatively charming low-budget way. The concept of a holographic computer creating images and scenes to protect its owner isn’t that far removed from the kind of animated offerings released by major studios today. Plus how often have we had an all-out rock cartoon, and a female-led one at that? If anything, a feature length cartoon of Jem should have found its way to theaters in the early nineties after the series has ended.

Landels hollows out the film down to its bare bones, leaving most of the names intact and switching the gender of the main antagonist. Jerrica Benton is a meek singer/songwriter too scared to go out on her own still living with her younger sister Kimber (Stefanie Scott, Insidious: Chapter 3), and two foster sisters (Hayley Kiyoko and Aurora Perrineau). Times are tough and their guardian aunt (Molly Ringwald, Sixteen Candles) is in danger of losing their California suburban home, threating to split the tight-knit family apart. When Jerrica takes on the persona of Jem and records a late night acoustic song, Kimber uploads it onto YouTube where it becomes a viral sensation overnight, rocketing Jem to stardom.

This is when the movie first shows signs of jumping off the track. The sudden stardom of a YouTube superstar is something director Chu knows a thing or two about having helmed Justin Bieber’s film Never Say Never. There are definite parallels between Bieber’s swift rise and Jem’s quick ascent to pop culture icon, though I think Bieber released more than one song before audiences went totally wild. The film tries so unsuccessfully to have us believe that Jem causes a commotion based on one melancholy song that I half expected the entire movie to be a dream at the end.

Before they know it, the executive of Starlight, Erica Raymond (Juliette Lewis, Cape Fear, who is either brilliantly badass or crazed campy…I still can’t decide which) is guiding them through make-overs, pop-up concerts, and red carpet walks that leave the girls in a daze.   Erica’s son, Rio (Ryan Guzman, The Boy Next Door) is charged with watching over the band and, shocker, he develops a thing for Jerrica that threatens his relationship with his scheming mother.

Synergy is now a tiny robot, the kind you’d by at a Brookstone for Christmas and sell at your garage sale the next summer, and it presents the opportunity for the film to have one interesting nugget to keep audiences awake for the next 118 minutes (it’s so long…so very long). You see, before Jerrica and Kimber’s dad died, he left Synergy unfinished and the little bot wakes up when they enter Los Angeles offering clues to a treasure hunt of sorts. So while Jem is struggling with her newfound fame (the film takes place over the course of 30 activity filled days), Jerrica is on a personal quest to finish the work her father started.

Musically the film isn’t that memorable. While Peeples has a pleasantly sweet voice she lacks the overall presence and star power needed for Jem. Her big solo number comes across as Lady Gaga light, performing in front of limber back-up dancers (when did they rehearse?) that kept my attention more than she did. As a group, Jem and the Holograms aren’t that distinguishable from any number of girl groups populating the music landscape now. I kept waiting for The Misfits to make an appearance, challenging the girls to up their game in the music department. Sadly (and maybe spoiler alert?) there are no Misfits to be had and the group works their way through two generic sounding ditties. The overall message in Jem and the Holograms is learning to love yourself no matter what life throws at you or how scared you may be to show who you really are and it’s a worthy one…but it comes in such a neon colored empty bucket of a film that I wound up just wishing it was printed on a T-shirt. Chu fills the film with all kinds of social media interjections, randomly cross-cutting cinematic scenes with YouTube videos of undiscovered music acts. There are also a healthy number of testimonials from those personally affected by Jem discussing what her music means to them. I couldn’t tell if these were all scripted or if they were people actually honesty linking their personal experiences to Jem. It’s so heavy with current social media that in five or ten years’ time it will be looked at as a time capsule of the here and now.

I would have liked to see the movie either become a full-fledged musical (an impromptu a capella moment on a beach had potential) or be a period set piece with all the excess of the 80s. Instead, it’s a film in serious need of autotune. 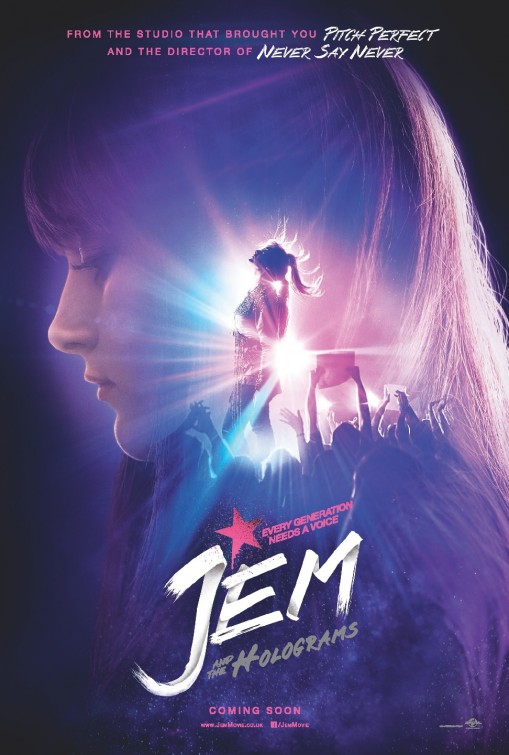 Thoughts: When I heard Universal Studios was getting behind a big screen treatment of the ‘80s cult cartoon Jem I was looking forward to a neon-colored camp odyssey that maintained the more fantastical elements while bringing the rock heroine forward into a new millennium.  After viewing the first trailer for Jem’s silver screen debut I’m…pretty bummed.  While I’m sure it will strike a chord with the Pitch Perfect crowd, this looks like a piffle of a mash-up of Josie and the Pussycats and Dreamgirls more than it does the Saturday morning flash-fest that inspired it.  Nice touch having ‘80s icon Molly Ringwald (Sixteen Candles) onboard and I’m never going to say no to a Juliette Lewis (Cape Fear) appearance…but yeesh…this looks terrible.

Synopsis: A young girl’s sixteenth birthday becomes anything but special as she suffers from every embarrassment possible.

Review: Few films that are about a specific time and place can truly stand the test of time. Changing ideals and styles have a way of making movies into cinematic time capsules of a landscape long since forgotten and it takes something special to make a movie truly timeless. Sixteen Candles is a great example of how a film can stay relevant and entertaining decades after it was originally released.

Celebrating its 30th birthday in May of 2014, Sixteen Candles couldn’t be more early 80s if it tried. From stereotypical insensitivity that was barely scoffed at at the time to jokes about floppy disks and a soundtrack that could be released as a I Love the 80s compilation CD, the film from writer/director John Hughes should be on display in the National History Museum if they were to do an exhibit on 80’s entertainment. Yet it remains deeply funny and, yes, timeless, especially to this reviewer that’s seen it dozens of times.

The first of only eight films that Hughes directed himself, it would serve as a launching pad to his mini-monopoly of the teen genre with now-classic 80s films like The Breakfast Club, Pretty in Pink, Ferris Bueller’s Day Off and my personal fave, the underappreciated Some Kind of Wonderful. After scripting Mr. Mom and National Lampoon’s Vacation, Hughes got the greenlight to bring his script about a teen girl having the worst sixteenth birthday she could imagine to the screen. Written specifically for rising star Molly Ringwald (whom Hughes had never met), it’s about so much more than having a bad birthday as it centers around two days in the life of Samantha Baker and her eccentric family and friends.

Capturing the life of a teenager from 1984 complete with the awkward self-doubt, the embarrassing notes passed in class, the terrifying prospect of having no one to slow dance with, and that unrequited love that plagues our upbringing, Hughes really showed a sensitivity to his audience in the way he represented what teenagers actually sounded like. In much the same way that Diablo Cody’s unique voice came through in her screenplay for Juno, Hughes proved right away that he had a magical “in” to this teen world.

Aside from the appealing performance of Ringwald, Hughes has a dynamite cast of older and younger talent that helps to make the film all the more memorable. There’s Anthony Michael Hall as a notorious freshman geek fixated first on getting into sophomore Ringwald’s pants only to wind up helping her connect with her senior crush Jake Ryan (Michael Schoeffling, Mermaids). Schoeffling is appropriately dreamy as Jake but over the years a shallowness to the performance becomes more evident. Carlin Glynn, Paul Dooley, Blanche Baker, and Justin Henry have nice moments as Ringwald’s family, not to mention the four established actors that play her dotty/doting grandparents.

Though in theory Gedde Watanabe’s (Gung Ho) efforts as exchange student Long Duk Dong (insert laugh here) are admirable, it’s difficult to not cringe often in the way Hughes approaches this character. With some very un-PC references (not only to this characters but with the multiple gay slurs) and a penchant for a gong sound effect to follow every time someone utters the name Long Duk Dong, it’s the one part of the film that hasn’t aged well.

In 1984 the PG-13 rating hadn’t yet been invented and with the f-bomb dropped before the opening title and some surprising nudity early on, it’s a wonder Sixteen Candles snagged a PG rating rather than the R Hughes would receive for his next film, The Breakfast Club. Both films are more in the PG-13 category but it’s fairly amazing Sixteen Candles skated by with merely a PG.

Thirty years after it was released Sixteen Candles still holds a canny replay factor that keeps me coming back. While the slapsticky final 20 minutes aren’t nearly as strong as the previous 70, it’s not enough to keep me away from sitting through the film any time I catch it on TV. It remains a smart representation of teen life, delivered with style by one of the gatekeepers of the genre.