Synopsis: Rose, a rebellious Guardian-in-training and her best friend, Lissa – a royal vampire Princess – have been on the run when they are captured and returned to St.Vladamirs Academy, the very place where they believe their lives may be in most jeopardy.

Review: Vampire Academy sucks.  It bites.  It’s a stake through the heart of YA adaptations capitalizing on the success of franchise films like the Harry Potter series and, to a lesser extent than you might imagine, Twilight.  It’s toothless in its construction and bloodless in its execution.  Yes, my fangs are bared and my bad puns are all but used up for this cheap looking, badly acted mess that could have gone so right but finds itself oh so very wrong.

With the director of Mean Girls (Mark Waters) and the writer of Heathers (Daniel Waters, yep, they’re brothers) involved I was expecting a nice mash-up of those two films with a little bit of Jawbreaker thrown in for good measure.  Sadly, none of the sparks that made those movies a pleasure (guilty or otherwise) exist here so we’re left to wonder what in the hell went askew.

When a film isn’t screened for critics it’s usually never a positive sign but there was something that compelled me to see the film anyway, possibly hoping that this high school fantasy was just not designed for critical consumption.  Based on the first novel in Richelle Mead’s popular series, the film follows Rose (Zoey Deutch, daughter of 80’s royalty Lea Thompson and director Howard Deutch) and Lissa (Lucy Fry), two girls bonded together by an age-old prophecy and their (mis)adventures in a prestigious boarding school for vampires.

An early prologue contains so much rote exposition to bring the audience up to speed that I half expected the actors to start saying things like “I’m opening a door. I’m sitting on a bed.  I’m looking dazed at the moment”.  Filmed in such non-descript locales suggesting the filmmakers secretly filmed in IKEA showrooms, it’s not long before Rose and Lissa are back on the ground of St. Vladimrs Academy and thrust back into a dangerous plot…the one thing Daniels Waters script doesn’t bother to flesh out.

Remember that scene in Showgirls where veteran dancer Cristal Connors asks newbie Nomi Malone to rehearse with her, only to have a cat fight stop rehearsal five seconds in?  There are at least three of passages like that here with Rose getting “trained” by the hunky Dimitri (Danila Kozlovsky) in enough time for the two to engage in badly timed fight choreography that ends with them staring longingly  at each other.  While Deutch has an Ellen Page vibe about her that’s mildly engaging, Kozlovsky is pretty much just an Aqua di Gio ad come to life.

This lack of personality in its characters is really where the film trips and falls, we can excuse Deutch’s milquetoast line readings for a while but when she’s paired with Fry the tone becomes incredibly deadly.  About as appealing as a glass of room temperature milk, Fry is supposed to be a regal princess but her cracking voice and penchant for wearing ankle length skirts gives off more Amish Princess than Vampire Royal.  The costume and make-up design is across the board awful and I can’t imagine any of the women in the film were happy that they wound up with rouged cheeks that suggest a playful three year old applied it.

The film earns two whole stars for including two bits of biting dialogue that hints at the direction the film should have gone.  Both occur too late in the film to save us from abject misery but in the hands of Olga Kurylenko (Quantum of Solace, Oblivion) and Sarah Hyland they were the most memorable moments of an entirely forgettable film.  Never deciding if it wants to be a satiric black comedy or a dewey young adult fantasy, it winds up turning to dust the moment the lights come up.

Laughably (but laudably) ending with the promise of a sequel, this movie should never have happened.  Even if the airwaves are chock full of vampire series right now, this would have been much better suited as a weekly television series because the episodic nature would have made more sense.  To the big screen the money hungry producers went, though, leaving the film to go the way of other franchise non-starters like Beautiful Creatures and The Mortal Instruments: The City of Bones.  Terrible.

Thoughts: If this adaptation of Richelle Mead’s popular YA novel looks a little bit like Mean Girls meets Heathers with vampire twist, you won’t be too shocked to hear that it’s directed by Mark Waters from a script by Daniel Waters and though the two aren’t related Mark directed Mean Girls and Daniel wrote Heathers.  It’s tough to say if audiences will line up for another vampire series so soon after the Twilight saga ended and the cinematic tide has changed to zombie love…but with a sassy bite to it the movie could turn out to be a harmless guilty pleasure. 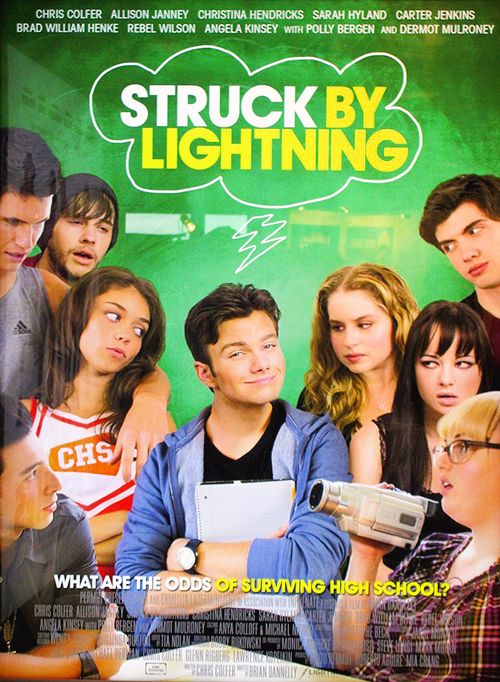 Synopsis: After being struck and killed by lightning, a young man recounts the way he blackmailed his fellow classmates into contributing to his literary magazine.

Thoughts: The declining popularity of Glee (yes, Glee-ks, your show is thankfully winding down) leaves its previously unknown stars to branch out to new avenues in the industry.  Chris Colfer seems to be taking an ‘all-in’ approach to life after Glee – in 2012 he published his first novel and had his first screenplay produced.  The outline of Struck by Lightning has a whiff of Mean Girls to it which might make it palatable to tweens and fans of Colfer but I’m not sold that there is really lasting talent to back up Colfer’s early promise.  Even with some familiar faces in the cast, I’m thinking this one may be best to hold off on until it makes its debut at your local Redbox.