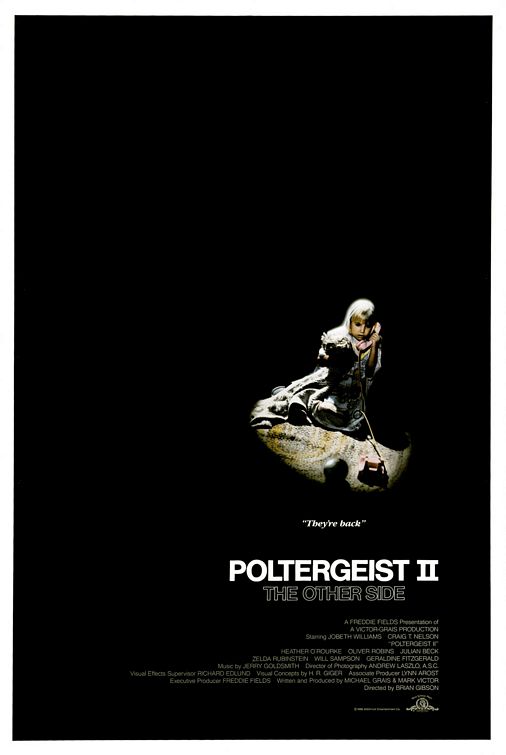 Synopsis: The Freeling family has a new house, but their troubles with supernatural forces don’t seem to be over.

Review: It’s no secret that the mid ‘80s produced a bad case of sequelits in most major studios and after 1982’s Poltergeist scared the pants of audiences throughout the summer it didn’t take a genius to see that a sequel would be on its way.  Released in May of 1986, Poltergeist II: The Other Side is one of the worst sequels ever and while it doesn’t tarnish the memory of its predecessor it sure gives it the good college try.

It’s been one year since the Freeling family encountered some nasty goings-on in their storybook like tract-house in suburban California.  Steve (Craig T. Nelson, Silkwood), Diane (JoBeth Williams, The Big Chill), Robbie (Oliver Robins), and Carol Anne (Heather O’Rourke) are living with Diane’s mother (Geraldine Fitzgerald) while they find a place to live.  In the original film there was a third child and she’s never mentioned…at all.  Tragically, the young girl that played the role was murdered shortly after the film was released, the first to die in what was later called the Poltergeist curse.  I get that they didn’t want to recast the role but to not mention her at all was very strange.

Anyway, our feisty medium Tangina (Zelda Rubinstein) has enlisted the help of an Indian shaman (Will Sampson) to help dig through the remains of the original Freeling home to discover secrets of the bodies that were buried under the development.  She uncovers the skeletons of a religious cult that died with their leader, Reverend Kane (Julian Beck, the second actor to die, this time before the movie was even released).  Somehow the spirit of Kane is released and again targets Carol Anne…hilarity, sorry, hysteria ensues.

It’s been rumored that Poltergeist II: The Other Side went through some major cuts in the editing room and it shows.  At a scant 91 minutes, the film doesn’t have the luxury of the slow burn that made the first film so enormously enjoyable. It’s a very get in and get out affair with a special effects heavy third act that inspires more snoozing than shrieking.

Especially disappointing is how bad the performances are here.  Nelson and Williams seem like they’re serving community service, but I’d be mad too if I had to pretend to vomit up a gigantic animatronic tequila worm like Nelson does in one particularly nasty scene.  Robins was never an especially, um, gifted child star and when he’s attacked by his braces you may be rooting for the metal to win.  The angelic O’Rourke was a tiny six year old in Poltergeist and her performance felt spontaneous and without guile…but in the four years between films she must have enrolled in too many child acting classes because she stinks.  While I loved Rubinstein’s unexpected charisma in the first film, her Razzie Award nomination for the sequel was absolutely deserved.

The worst thing about Poltergeist II: The Other Side is not that it’s a cheap money grab for fans of the original…it’s that it’s so very boring.  Though loaded with decent effects and benefiting from Jerry Goldsmith’s haunting score, it barely holds your interest for even seconds at a time.  It’s a silly mess that doesn’t even deserve to be mentioned in the same breath as the landmark film it followed.