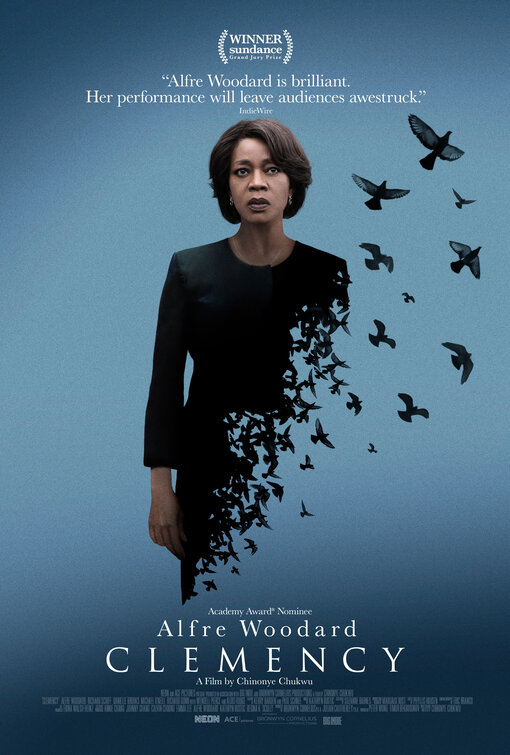 Synopsis: Years of carrying out death row executions are taking a toll on Warden Bernadine Williams. As she prepares for another one, Williams must confront the psychological and emotional demons that her job creates.

Review: When the Oscar nominations were announced there were a few titles and names I was hoping, but not necessarily expecting, to see.  Sure, I was crossing my fingers that Taron Egerton’s solid singing and dancing dramatic performance in the Elton John biopic Rocketman would sneak in and my heart was with previous acting Oscar winner Mary Steenburgen landing a songwriting nom for her lovely tune from the underseen Wild Rose, not to mention holding out a sliver of hope the Academy would see past the genre lines and give Lupita Nyong’o a nod for the dynamite work she did in the horror feature Us.  Yet there was one name I really wanted to see in the mix and even though it was a longshot I half-believed a surprise Best Actress nomination for Alfre Woodard in Clemency would turn up.  You can head over to my Oscar 2020 nominations page to see who landed a nomination instead of Woodard.

It’s a shame Woodard was left out of the big night for her career high work in Clemency, a small but mighty picture from writer/director Chinonye Chukwu that premiered around this time last year at the Sundance Film festival where Chukwu became the first black woman to win the U.S. Dramatic Grand Jury Prize.  Ever since it debuted, the buzz around Woodard’s turn as the warden of a maximum-security prison in charge of death row inmates was strong and that low hum continued throughout the rest of the year.  Here was an actress (a previous Oscar nominee in 1983 for Cross Creek, starring Steenburgen of all people!) that had worked steadily in Hollywood for the last four decades and built up a strong resume, appearing in projects with top directors and stars that was finally getting a lead role.  Certinaly, this was a role to be celebrated and rewarded.  Still, how did the movie match up to her performance?

The opening moments of Clemency are as gripping as they come.  Warden Bernadine Williams (Woodard, Annabelle) and her small team of death row guards are accompanying a condemned inmate through the final steps of his execution and the audience is taken through the agonizing procedure with them.  What seems to be an unfortunately routine process doesn’t go as planned and it has a devastating effect on all involved, spurring a sort of awakening in Bernadine to reflect on her position and the emotional toll carrying out death sentences has taken.  Though she claims to her colleague (Richard Gunn, Dark Places) to just be doing her job, it’s evident from her increased reliance on alcohol and a disconnect with her husband (Wendell Pierce, Bad Moms) that a measure of uncertainty and roiling guilt is running just below her calm surface.

It’s with the delivery of an execution date for Anthony Woods (Aldis Hodge, What Men Want), a prisoner maintaining his innocence, that the cracks in Bernadine’s surface start to show.  Her marriage suffers, her once friendly relationship with a anti-death penalty lawyer (Richard Schiff, Man of Steel) is strained, and her own beliefs on what really is the correct punishment that fits the crime unavoidably start to enter into her life, blurring the once solid lines between the personal and professional.  It’s not all Bernadine’s story, though, with a good chunk of time in the middle devoted to Anthony and his attempts to be granted a reprieve from the governor for a crime he says he didn’t commit and a late in the game encounter with his ex-girlfriend (Danielle Brooks, Orange is the New Black) and mother of his young child.  This conversation between two people so close together physically and emotionally but so far apart divided by the glass of a prison visiting room starts one way and veers into a surprising direction.  Hodge and especially Brooks play it fantastically and for maximum effect without resorting to overly dramatizing what is already a emotionally heightened scene.

The film belongs to Woodard though and when some people say an Oscar is often won by one particular scene you could point to a long unbroken take on Woodard’s face where the actress takes you on a remarkable journey.  Everything you see informs you about what this character is feeling, thinking, harboring, and deciding and Chukwu hangs on it just long enough for you to realize you’ve been leaning far forward in your seat, holding your breath.  Much like Margot Robbie’s mirror scene in I, Tonya where she practices her “game face”, battling back her fears and aggression, Woodard does the complete opposite and lets her guard down. The results are chilling and that one scene alone should have bumped out at least one of the talented women that received a nomination over her.

Acquired by Neon distribution, Clemency was added to its already busy slate of 2019 films and I think Woodard’s nomination hopes suffered because of it.  Neon also distributed Parasite and the small but growing company likely could only put their efforts behind one film and obviously Cannes Best Picture Winner Parasite was it.  Note that in addition to Parasite, in 2019 Neon released the Oscar nominated Honeyland as well as the aforementioned Wild Rose and other well-regarded titles like The Portrait of a Lady on Fire, The Biggest Little Farm, Amazing Grace, and Monos.  So you can understand why they may have spread themselves a little thin.  While Woodard should have received an Oscar nomination, I’m glad she was recognized by the Independent Spirit Awards.  Who knows?  Maybe she’ll pick up  a win there!

I saw Clemency in the morning before heading to the theater to see Just Mercy and it was interesting to see both movies back to back as they are dealing largely with the same social justice issues, just from different sides of the prison wall.  I found strength in both perspectives and might give the edge to Clemency only because it isn’t wrapping its tale in any crusade after the fact.  Both are clearly anti-death penalty and if I’m being honest I found myself challenging my own feelings about these sentences when presented with the numbers and facts of just how many people have been exonerated by evidence while on death row…and thinking of all those that didn’t get that chance.  I haven’t been exposed to it as much as the fictional characters in Clemency or the real live ones in Just Mercy so my eyes aren’t open as wide, but they are open.